I am so excited to announce my (coming in 10 days) new release--The Rogue King! The first book in my Inferno Rising series features dragon shifters kings and clans. This is a crossover from my Fire's Edge series, but they don't' have to be read in order, so jump right in!
This is also my first book in mass market paperback. You can preorder both print and eBook now! 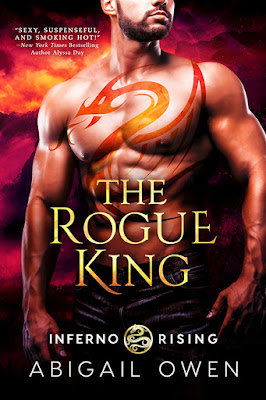 Kasia Amon is a master at hiding. Who—and what—she is makes her a mark for the entire supernatural world. Especially dragon shifters. To them, she’s treasure to be taken and claimed. A golden ticket to their highest throne. But she can’t stop bursting into flames, and there’s a sexy dragon shifter in town hunting for her…
As a rogue dragon, Brand Astarot has spent his life in the dark, shunned by his own kind, concealing his true identity. Only his dangerous reputation ensures his survival. Delivering a phoenix to the feared Blood King will bring him one step closer to the revenge he’s waited centuries to take. No way is he letting the feisty beauty get away.
But when Kasia sparks a white-hot need in him that’s impossible to ignore, Brand begins to form a new plan: claim her for himself…and take back his birthright.

EXCLUSIVE EXCERPT
Brand crossed his arms. “Are you going to run again?”
No. The thought punched through her. Kasia paused, trying to figure out why her gut reaction would be adamantly against leaving this man when logic told her she should run at the first opportunity. Not that she’d tell him that.
“I haven’t decided,” she murmured instead.
If he could find her, so could others. Possibly others who’d be worse.
“Why’s that?” he asked.
She gave him a direct look. “I’d rather the devil I know than the devil I don’t.” Did he flinch? Before he could comment, Kasia kept going. “I have mixed feelings about it. Some tell me to trust you, and some tell me not to.”
“Trust me?”
She almost laughed at the deep doubt in those two words, not that she blamed him. “Yes.”
“Word to the wise…”
She felt that gaze again, almost like a caress, and her skin prickled. What was wrong with her?
“Don’t give your trust too easily in this world. More often than not, people like me are out to harm you or use you.”
“Aren’t you trying to stop me from running away?” she pointed out. “You might want to work on your sales pitch.”
Brand frowned, and she got the distinct impression he’d surprised himself with his honesty, and not in a good way. Interesting.
Kasia leaned back on her hands and swung her feet, even while she watched him closely. “I do know some things about you.” She stood, intending to make her point, though now she was uncomfortably aware of how close that move brought her to him in the tiny room. Why’d they make this room so small? “You want to know what you were doing in every vision I’ve had of you?”
His shoulders stiffened, his biceps stretching out his T-shirt a little more. “What?”
“Protecting. Sometimes me, sometimes others. Big ways. Small ways. But always protecting.”
Brand jerked, though his expression didn’t change one iota.
Kasia kept pushing. “Look at how you handled our first meeting. Your instinct was to help me.”
Now he scowled. “My first instinct was to claim you.”
They both froze, gazes locked, as his harsh words lingered in the air between them. If he’d meant to shock her, prove her wrong, all he’d managed to do was give her ideas. Ones that aligned way too closely with those fantasies she’d indulged in about him all year long.
Wrong, wrong, wrong ideas, but her body tingled in all the right places. However, he’d also hit on the fact that confused her the most. He was a dragon shifter, a creature she had to avoid, someone she shouldn’t put her trust in regardless of the visions.
After a long, uncomfortable stretch of silence, she realized how carefully he was holding himself. From touching her? She cleared her throat.
“You won’t hurt me,” she insisted.
“You’re right. I’m going to take you to the king, then you’re no longer my problem.”

Congrats on your release!

A new release. How exciting! Wishing you much success, Abigail.