Paranormal? Contemporary? Which do YOU Choose? With @meganslayer #pnr #contemp #gay

It's not often I get to post in February. Once every four years, to be exact. Grin. Gotta love leap years!!

This is one of the contemporary stories I just finished. I know you're going to love it. I do. :-) 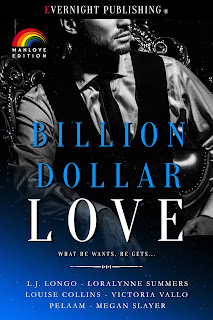 Our six hand-picked stories are a delicious treat for romance lovers. The heroes are filthy rich, naughty, and need the right man to show them that money can't buy love. Some have earned their fortunes legally, and others dominate the underground. One thing they have in common—when they finally fall in love, they fall hard.

Enjoy one story a day, or binge the entire anthology.

Or Something by Loralynne Summers

Can't Be Bought by Victoria Vallo

A class reunion and another shot at love?

Luke Benjamin never thought he’d spend time with his high school crush—not again. He and Carson had been tight, but went their separate ways. He followed his dreams and became the hottie librarian in Litchfield, their hometown. He never forgot his first love or how much it hurt when they split. Can he open his heart to Carson one more time to find the love he’s always craved?

Carson Garett needed to become someone. He spent his college years developing an app for runners. Selling the app made him millions, but he upped his net worth by becoming a spokesperson for nutritional supplements. Now that he’s made his mark, he’s ready to reconnect with the one who got away—Luke. Will Luke want him back? After so much time? Or will he have moved on?

Only time and a reunion they’ll never forget will tell.

Here's a sample of As Long As You Love Me
©️Megan Slayer, 2020, All Rights Reserved

Luke’s eyes widened. “Hi.”
Carson focused. Damn. Life had been good to his ex-boyfriend. Still so tall and thin, but handsome. He’d cut his black hair shorter than when they were in college and lines had been etched at the corners of his brown eyes, but he still exuded sexiness. The stubble on his strong jaw added to his attractiveness. What would it feel like to kiss him now? To have him smile and hold his hand again? Would the sparks be as intense? More?
He had to find out.
Carson had Luke there and close. He knew what he wanted, and he wouldn’t stop until he got his man. He wouldn’t lose or walk away this time.
****
Luke wished he hadn’t shown up at the reunion and hadn’t brought Duncan. He hadn’t wanted to arrive alone. He’d gone to the prom alone and more than one homecoming dance on his own. Then he’d started seeing Carson, and he hadn’t been a solo act. With Duncan, he wasn’t alone, but he wasn’t happy. He’d have to introduce Carson to Duncan. Damn it.
Carson extended his hand to Luke. “It’s been a long time.” Warmth shone in his eyes and he smiled. He held the handshake for a pregnant moment.
“It has,” Luke managed. Carson had that effect on him—tongue-tied. He wanted to say more, but the words weren’t there. He swept his gaze over Carson. His hair was a little thinner, but still perfect in its style. He’d grown thinner, but the slender look worked for him. His blue eyes sparkled. He smelled good, too.

You aren't the only one, Megan. I read in streaks--a whole lot of romantic suspense, then a bunch of sci-fi roms. I'm almost done writing an sfr and can't wait to get back to my cozy mystery series. I like variety. Good luck with your latest.