New Release, and the Silver Foxes for the Win!

About a year ago, USA Today Bestselling Author Tasha Black reached out and invited me to write three books for the Intergalactic Dating Agency's Fall 2020 season.

For those of you who don’t know, the IDA is a shared concept, which is different from a shared world. Shared concept means the authors write whatever stories they want within the community’s guidelines. In this case, the stories must include a dating agency that matches alien males with Earthling females. A shared world allows the authors to write stories within an already existing world created by someone else. (S. E. Smith’s, The Worlds of Magic, New Mexico is an excellent example of a shared world.)

So, my IDA stories could be set in my Prophecy series universe, or I could create a whole new universe and series. I, of course, chose to start from scratch. Because why use something that already exists when I could drive myself crazy creating something brand spanking new in less than twelve months? (Crazy being the operative word in that sentence.)

And to take crazy to a whole new level, I made my heroes and heroines over fifty. There are not a lot of Silver Foxes in Sci-Fi Romance at this point, which needs to change. Someday you younger folks will thank me for this!

The planning stage was going along swimmingly. I had three novella length stories to write, and the first two were flowing from my fingers…until the hero in book one decided that what he really needed was a set of wings. And the heroine got all hot and bothered by this idea. And then, the other two couples chimed in their agreement.

Of course, any author reading this blog is nodding because they already know that there was no way I was going to win that argument.

This is how my Silverstar Mates series was born. Book one, Above the Storm, released last Friday. Book two, Wingand a Prayer, will release October 19, 2020. And Book three, Trial by Fire, is scheduled for a November 12, 2020 release. (Books 2 & 3 are available for preorder now.)

So, without further ado, meet Kyzel and Robyn, my couple from Above the Storm! 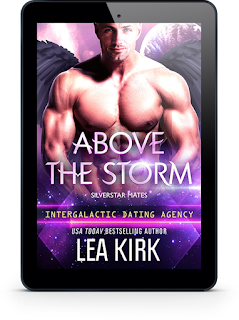 Love can be as elusive as stardust.

After thirty-five years married to a controlling husband, Robyn Martin Donahue now has her freedom, friends, and a job she adores. And there’s still room in her heart for a special someone. Where in the galaxy can she find a man who will love and respect her, not try to rule her?

Recently widowed Kyzel Raptorclaw, the remaining sovereign of his clan, is on the hunt for a new mate. This time he wants more than just an ally; he wants love. But breaking with his peoples’ ancient mating tradition comes at a personal price—one his new mate may not accept.

Can Kyzel convince Robyn they are better together, or will their happily ever after crash and burn before it has a chance to soar?

Welcome to the Silverstar Agency, specializing in intergalactic love matches for those over fifty.

Buy Above the Storm

Excerpt from Above the Storm

(Setting: Robyn has just gotten home from work, is going through the mail trying to clear her mind of an annoying text conversation with her ex. Little does she know, she’s about to have her first startling close encounter.)

The rap of knuckles against her front door drew a groan from deep inside. Guess Kevin wasn’t finished talking. Once an idiot….

No, no, no. She’d sworn she’d never treat anyone the way Kevin had treated her, and that promise had included Kevin. But that didn’t mean she couldn’t give him a piece of her mind.

She stomped toward the door, grasped the knob, and yanked the door open. “Why, Kevin? Why can’t you just…? Ohh.”

A vaguely nutmeggy scent floated on the subtle evening breeze as she tipped her head back…and back, and back. Her gaze roved over the leather straps across the smooth, bare chest, until she met the piercing ice-blue gaze of her rather enormous…and ridiculously handsome…visitor. The guy had to be pushing seven feet; too tall to pass through her doorway without ducking.

And his hair—which wasn’t really hair, it was thin, sleeked-back feathers that ran over his head from a widow’s peak back—looked a lot like a bald eagle’s, with more varying shades of gray than white.

“Good evening, Ms. Donahue.” Her ridiculously handsome visitor had a ridiculously deep and sexy voice. The kind of voice that reached out and caressed her in all the places she hadn’t been caressed in, well, way too long. And never properly.

A subtle motion drew her attention to something big, silver, and feathery behind his broad shoulders.

Her breath hitched in her chest. “OhdearGod!”

She slammed the door.

But the guy has wings!

Honest-to-God wings. What was she going to do with this? 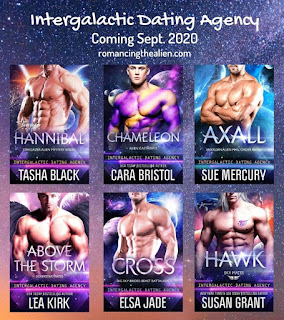 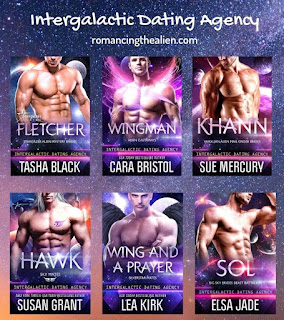 To learn more about the authors and stories of the IDA, check out the website. 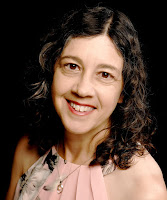 USA Today Bestselling Author, Lea Kirk, loves to transport her readers to other worlds with her sci-fi romances.

When she’s not busy writing about the blue and green aliens of her Prophecy series, she's hanging out with her hubby, five kids (the nerd herd), and their spoiled yet adorable pup.

She is currently working on the fourth book in her Prophecy series, and her Silverstar Mates series featuring age 50+ protagonists for the Intergalactic Dating Agency.

For more on Lea's books (past, present, and future), check out her:

Lea Kirk
USA Today Bestselling Author Lea Kirk has been making first contact, two hearts at a time, since her award-winning Prophecy series released in 2016. Her adventures continue with the tongue-in-cheek humor of the Silverstar Mates, a series that proves you're never too old for love.

I love the premise. I might sign up with the agency. haha Your Muse must have a good sense of humor. It's reflected in this excerpt I chuckled at her reaction. I wish you all the best with your new ventures. Looks like you're going great guns.

I just finished this book last night. It was a lot of fun. Didn't expect the crisis. Good job. You did a great job with your characters. Thank you for making them older. Love & passion know no age barriers. Looking forward to the next book in this series.

Diane - I'm delighted you enjoyed it so much. Ha! You didn't see it coming, huh? That's great! Next one is Meryl & Rol's story, which I'm really excited about. Loved writing about them.