Sixty-one Days has December, and Other Senior Moments

I do have great news, though. My three-book Silverstar Mates series with the Intergalactic Dating Agency is available everywhere now! Ready to dive into stories featuring seasoned heroes and heroines? Experience hilarious-encounters-of-the-golden-kind that redefine “senior moments?” Then you must check out this series! 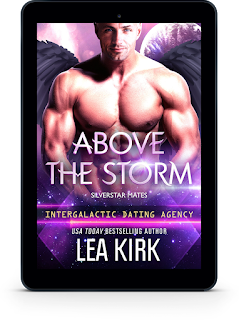 Love can be as elusive as stardust. After thirty-five years married to a controlling husband, Robyn Martin Donahue now has her freedom, friends, and a job she adores. And there’s still room in her heart for a special someone. Where in the galaxy can she find a man who will love and respect her, not try to rule her? By law, a monarch cannot govern alone. Recently widowed Kyzel Raptorclaw, the remaining sovereign of his clan, is on the hunt for a new mate. This time he wants more than just an ally; he wants love. But breaking with his peoples’ ancient mating tradition comes at a personal price—one his new mate may not accept. Can Kyzel convince Robyn they are better together, or will their happily ever after crash and burn before it has a chance to soar?

Wing and a Prayer 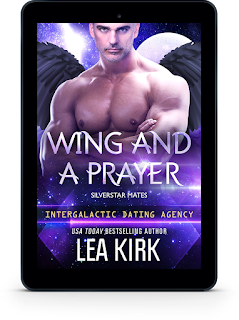 Happily ever after didn’t work out. After her divorce, Meryl Faulkner decides to embrace all the best life has to offer: family, friends, and
retirement. She never expected a sexy winged alien to divebomb into her quiet, orderly life. And he seems to think he’s her mate! Deemed un-mateable from birth. Years ago, Rol Raptorclaw came to terms with the solitary life society thrust upon him. Serving his monarchs keeps him too busy to be lonely—mostly. So how is it that one maddening human female has inserted herself into his unworthy heart? Rol is determined to convince Meryl he is not a flight risk, but can he do so before the trade negotiations with Earth wrap up and he must return home? 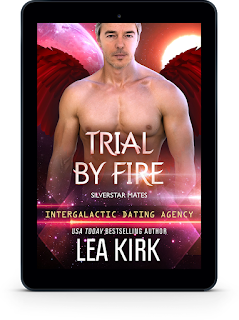 True love only happens once in a lifetime, right?
Nixy Vogel waited a long time for wedded bliss, only to find herself widowed two years later. Working for the Silverstar Agency has helped ease her grief. So, why is the alien who’s trying to put them out of business stirring such a longing in her shuttered heart? Waiting several lifetimes for “the one.” The ancient mate-matching tradition of Kai Firewing’s clan could end unless the Silverstar Agency is exposed as a fraud. Simple enough to do…until his rival lights a fire in his heart as only the soul mate of an immortal phoenix can. Will Nixy embrace her second chance before it—and Kai—goes up in flames?

Lots of new things are coming in the next year. If you’d like to receive exclusive advance notice of any deals and updates from me, please subscribe to my newsletter, Lea’s Letters from Space. With your subscription, you can get a free copy of my Prophecy companion story, Space Ranger—part of the original Pets in Space®, and no longer available on any platform.

Lea Kirk
USA Today Bestselling Author Lea Kirk has been making first contact, two hearts at a time, since her award-winning Prophecy series released in 2016. Her adventures continue with the tongue-in-cheek humor of the Silverstar Mates, a series that proves you're never too old for love.

These sound like just what I need . . . being of a certain age, myself! Old doesn't mean mummified!

Love that series--esp. the older heroines.

Sixty-one days of 2020? I had such high hopes for 2021. For a while, I wondered if we were in a time loop like Groundhog Day. Now I have hope again. Hope for all of us.

Yes, Nancey! We're still in the game, for sure. LOL

Diane, I'd wondered that too. Keep the faith, sister!

These books sound like such fun. An intergalactic dating agency. I'm of a certain age, too, and I'd might even pay for the services of such an agency. I've begun to believe that a plague has killed every handsome man on Earth. haha

These books sound great! Congratulations on their release!