To Epilogue or Not?

According to Writer’s Digest there are six common uses for epilogues:

In romance, epilogues are most frequently used to give the reader a quick window into the life of the couple after the HEA (happily ever after). And indeed, as a reader, I’m no longer satisfied with “I love you” followed by fade to black with the words “and they lived happily ever after.” I want to sigh over the proof that they did live happily every after, and the epilogue can give me that.

In paranormal romance in particular, but also any romance series that will be a continuation of an overarching plot or characters, epilogues can also be used to foreshadow the next books and leave the readers both satisfied with the book they’ve just finished as well as wanting the next one. Sort of a cliff-hanger, but not really, which I know is totally cheating.

In particular, I use this method with my paranormal romances, hinting at the next villain, the next romantic conflict, the next conflict set up, and so forth, on top of giving that window into my current couples HEA. Check out the example below from TRY AS I SMITE.

So what about you? Are you a fan of epilogues? What do you like or not like about them?

EPILOGUE - TRY AS I SMITE 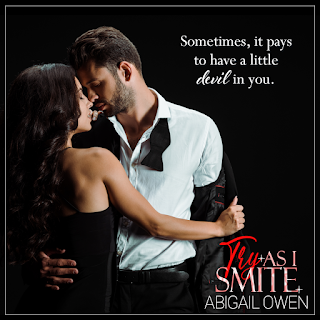 Delilah jerked upright in bed, the sheets slipping softly down her body and her bare nipples puckering in the chill of the air.

It took her a moment to realize where she was as she came out of her own vision. But as clarity returned, she breathed in pure contentment. She was home.

A low grumble was all the warning she had before a warm arm banded her waist and pulled her back down into waiting arms, skin against skin. Alasdair tucked his head into the curve of her neck, feathering a kiss across her pulse.

“Another Seeing?” he asked in a sleep-rumpled voice.

She sighed, relaxing into him. “Yeah.”

That caught his attention, and he blinked open, blue eyes suddenly alert. “What?”

She sighed, thinking through the images she’d just dreamed. “I’m pretty sure a cupid is about to accidentally shoot himself in the foot, giving himself amnesia, and falling for a siren at the same time.”

Alasdair grinned. “Isn’t a siren’s job to lure foolish men to their death with her beauty?”

Delilah sighed again. “Yes. This one is going to be complicated.”

That drew a chuckle from him. “My meddling wife. You just can’t help yourself.”

“I make people happy,” she protested.

“And I love that about you.” In a sudden move, Alasdair rolled her beneath him, settling between her legs, already hard and hot against her. “You definitely make me happy.”

She rolled her eyes but couldn’t hide her own blissfully happy smile. “Stupid happy.” That’s what his sister, Hestia, had called them the other day.

“You make me happy, too. Even if you are a control freak.”

With wicked intent and a deliberate wiggle, Delilah whispered a series of words that set both their bodies buzzing with sensation.

Alasdair growled, pretending to be irritated with her upping the pace of their lovemaking, sending them almost frantic with that single spell. But his grin told her he loved it. Mostly because they were about to orgasm, over and over, for the next hour. Together.

Sometimes, it paid to have a little devil in you.

Sometimes. I guess it depends on how well it is done. I do love a good wrap up to find out what's happening with my favorite characters.

I love that 'little bit more' an epilogue offers . . . if it provides a glimpse of that HEA down the road or is a tease to another book in the series. But for it's own sake, it can interfere with the satisfying conclusion that could have been wrapped up naturally.

I love epilogues and prologues and use in my books. Like you, I'm not satisfied with I love you. THE END. Let me get a glimpse of them together and see if there is the possibility of a follow-up book. So, I vote Yay.

I don't mind them as long as they're not too involved. A snippet is good, an extra chapter is bad, especially if it includes a cliffhanger. I hate cliffhangers.

I love an epilogue to provide the HEA with a realistic time frame. It makes the HEA more believable if it is months after the meet-cute rather than days after it.

As a reader and an author I LOVE epilogues (along with a short prologue)! It's like "sighing" at the end of a great story. As a writer, it's one of my most favorite scenes to write. It ties up the HEA. Wonderful post, Abigail!

I love and use epilogues in my Scifi Romances. Great article, Mary :)

I am a fam when the story ends with me wanting more. As long as it leaves me satisfied with the story. Don't like cliff hangers! Great post! Thanks for sharing!

As an author and a reader, I am strongly pro-epilogue. Great post, Abigail!