Accosted By Characters by Marilyn Barr

Sometimes a character jumps out at you. When I met Susie of Smoother Than Spumoni, she actually jumped out of the ocean at my family. Susie the Dolphin Shifter is inspired by the rambunctious dolphin of the same name who lives between Anna Maria Island and the mainland of Florida, USA. This dolphin’s favorite activities include knocking over rafts, smashing into the dolphin-watching tour boats, and splashing diners at the local oyster bar on the pier. Susie’s antics aren’t malicious. When you topple off your raft in the Gulf of Mexico, she swims away instead of attacking. It seems this dolphin does it all for sport. 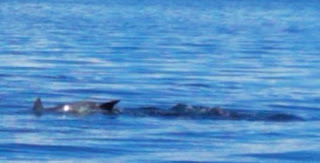 Susie, playing at a safe distance

My family travels to Anna Maria Island every September for an end-of-summer vacation. In 2018, Red Tide was at its height and the Florida authorities were recommending tourists limit their time swimming in the Gulf of Mexico. Without the beach to entertain my 8-year-old, my family was scrambling for other activities. We went on a dolphin-sighting tour with Paradise Boat Tours where we saw dolphin pups, historical buildings, and Susie’s shenanigans. 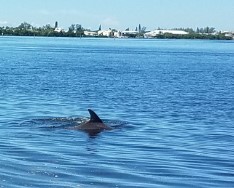 Susie, approaching the boat to splash and try to capsize us

I was brainstorming the perfect heroine for Strawberry Shifters Book 8: Water Under the Bridge. I knew I wanted to write new adult romances for all Rosie Paulino’s homeschooled boys, starting with Frank Jr. in Book 8. Frank had to step into his father’s shoes, run the family restaurant, and manage his five younger brothers at the beginning of Book 1: Bear with Me, so I wanted to give him a special heroine. Frank Jr. would go on his shifter internship in the Seagrass Island pack which I modeled after Anna Maria Island to find his aquatic shifter true love. But what creature would she be and how would her personality mesh with my workaholic, grumpy werewolf?

One of my favorite romance tropes is the ray of sunshine meets the grump. Wild dolphin Susie checked all the boxes but somehow the match didn’t seem right. I bounced the idea off my husband who doesn’t read romances but surprisingly had strong opinions on the sunshine/grumpy trope. He pointed out that true love means you fit without having to change the other person. He asked why the grump must change to deserve the sunshine. He said he would find a true “ray of sunshine” spouse annoying. I wasn’t sure how to take that—am I not sunny or annoyingly happy?

Susie, seconds before our boat was rocked.

Susie the trickster dolphin is a driven businesswoman in her human form. She has dreams and plans on building a business empire out of her parent’s small shop. The original Water Under the Bridge has her family as oyster divers, but when The Wild Rose Press announced its One Scoop or Two series, I revised the book. Susie and her family own Larkin’s Dairy Dip. Smoother Than Spumoni is the front third of Water Under the Bridge, remastered with an environmental mystery surrounding the red tide of 2018 in Florida, USA. 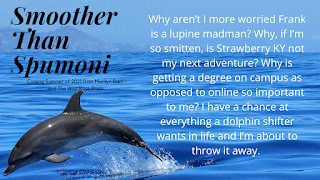 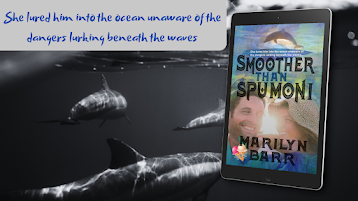 Susie Larkin is a dolphin shifter and heir to the humble Larkin’s Dairy Dip on Seagrass Island, FL. Pedaling ice cream from bicycle carts on the beach is just a stepping-stone for this future CEO of a frozen confection empire—or so she hopes.

Frank Paulino Jr. receives his first taste of freedom from Strawberry, KY in a summer internship at Bart’s Oyster bar. His pasta creations save the restaurant when red tide poisons the fresh fish of the bay, making him the most popular werewolf on Seagrass island.

Frank and Susie uncover a conspiracy that threatens not only the wildlife of the area but also their lives. Can these two shifters put their ambitions aside long enough to give their relationship a chance, or will Frank pay the ultimate price to protect Susie and the island she loves?

An interesting post. I'm sure I'd love the dolphin shifters. Is the Strawberry shifters before or after Spumoni?

Hubs and I went on a tour of Tampa Bay and dolphins raced our boat. Such fun. In one of my stories, a former Type A tries to reform another Type A so she won't end up like he did--with a life-threatening illness. Sometimes, like attracts like. Your dolphin shifter sounds very interesting.

Technically Smoother Than Spumoni comes after Book 3: Go Scorch Yourself, but Frank Jr is such a minor character that you could start with Spumoni. Thanks for giving it a try!