FORBIDDEN LOVE IN ROMANCE
Thank you so much to fellow sci-fi romance author, Diane Burton, for inviting me to guest blog on Paranormal Romantics!

There are many tropes used in romance, but one of my favorites is that of forbidden love. Usually my stories of forbidden love involved an alien and someone from Earth, or two aliens who are of different castes or those whose species are at war with each other. With my newest release, the forbidden love is much more contemporary. It’s between a young woman and the young man who grew up next door to her. Only they are of different races. Now, in 2017, one would wonder why this is still classed as “forbidden love”, but if we look at the political climate of this year, it is easy to understand why.

My favorite part about writing these stories is the fact that the main characters defy the wishes or orders of their parents/superiors for the sake of love. They look past the biases of their parents, their family, or their race to come to their own conclusions about the forbidden side. And many times, they are willing to risk all material possessions to be with the one person who has captured their heart. To me, there is nothing that says love more than that. Well, besides completely giving their life, but that wouldn’t provide the happily ever after ending that romances require. It is also a trope that can carry through all sub-genres of romance.

Tell me: What are some of your favorite forbidden love books or movies? 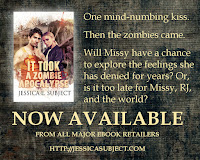 IT TOOK A ZOMBIE APOCALYPSE
by Jessica E. Subject
BLURB:

It started with a kiss.

Then the zombies came. Now, Missy must work with the neighbor her parents hate if she wants to survive. But zombies aren't the only threat to her life, or her heart.

RJ pressed on the text and read….

Zombies? He dropped his phone and stared at it on the floor, expecting it to explode. Zombies didn’t exist. He was in some kind of dream. Had to be. Missy actually had come home for the summer. And kissed him. Now, zombies.

“What is it?” Missy bent down to pick up his cell then handed it back to him. “What happened back at the park?”

“Zombies.” The word came out before he had a chance to stop it. He didn’t know whether to laugh or grab Missy again and run.

A crooked smile formed dimples in her cheeks. “You’re joking, right? Trying to help me laugh off what happened.”

“I wish.” He showed her the message from his father. “My dad doesn’t have a sense of humor.”

The phone beeped, and she pushed his hand away. “I think it needs to be charged. We should call him just to be sure. Or contact somebody. Maybe he meant something else. You know how stupid autocorrect can be.”

RJ rushed to the kitchen, found his charger, and plugged in the cell. But, by then, he’d lost signal. Reception was spotty in West Vitula, but he couldn’t get anything. He peeked through the doorway, out to the living room. “Missy, can you get a signal?”

After digging into her purse, she pulled out her phone with a pink, sparkly case. Not at all what he expected from her. Had he missed that girly side, or had someone given it to her, and she didn’t want to hurt their feelings? That he could understand.

She held the cell up and moved around the room. “I got nothing. What’s going on?”

“I don’t know. Maybe we should try outside?” Though he doubted it would make a difference.

Missy stepped over to window and shoved the curtains aside. “Um, there are people coming. And they don’t…look right.”

RJ glanced outside. Neighbors walked down the middle of the street, their bodies twitching. And no one stopped to talk to one another. They just kept marching along to some unknown destination. As they came closer, he noticed their tattered clothing, their disheveled hair, and limbs connected at odd angles to the rest of their body, as if they’d been trampled. And now they were up and walking.

ABOUT THE AUTHOR:
Jessica E. Subject is the author of science fiction romance, mostly alien romances, ranging from sweet to super hot. Sometimes she dabbles in paranormal and contemporary as well, bringing to life a wide variety of characters. In her stories, you could not only meet a sexy alien or two, but also clones and androids. You may be transported to a dystopian world where rebels are fighting to live and love, or to another planet for a romantic rendezvous.
When Jessica is not reading, writing, or doing dreaded housework, she likes to go to fitness class and walk her Great Pyrenees/Retriever her family adopted from the local animal shelter.

Jessica lives in Ontario, Canada with her husband and two energetic children. And she loves to hear from her readers. You can find her at jessicasubject.com.

Thank you again, Diane, for having me back as a guest at Paranormal Romantics!

Glad to have you here, Jessica. You have combined so many difficult issues in your Zombie Apocalypse story, esp. racism. Love what I've read so far.

Welcome, Jessica! Sounds like an interesting read, thank you so much for sharing.

Thank you, Diane! Yes, I've touched on a variety of issues in a round about way in many of my stories, but in this one, those issues are front and center.

I love forbidden romance too, when people defy everything else for love. Hello, Romeo and Juliet!

Welcome, Jessica, I, too, love forbidden romance--as if no one knew that! :) Awesome cover!

Jess, I finished the story this afternoon. Very good! I left a review on GR and Amazon. Best wishes!

Hi Jessica!! Nice to see you here. I've been loving bits and pieces of this book over on Weekend Writing Warriors. Guess it's time to one click. As a writer of the paranormal, almost ALL my books are forbidden romance.

I agree, CJ. That is the ultimate test of love. Thank you!

Hi Nancy! Thank you so much! Yes, in paranormal and sci-fi romance, it's such a common trope, and fun to write. :)

Great post, Jessica! Your excerpt was wonderful. Added this to my TBR pile!