My answer is no, and yes.

I’m really not being intentionally obtuse here, I swear. The truth is, I’m not a musician and I can’t read a note of music, but I love music and it’s fundamental to my writing.

So, why do I say no? I’m one of those writers who craves absolute quiet when I’m writing. No kids running through the house, no answering the phone when it rings, and no music to interrupt the flow of my thoughts-to-the-page. Sounds pretty boring, huh? It’s not, trust me. There’s plenty of noise going on in my head as each scene plays out. As I type I can “hear” it. The sound of boots running through the corridors of a spaceship, the thump of stones thrown into a muddy bank on the far side of a rushing river, the deadly whisper of a Matiran telum being shot.

Here’s the yes part: During my plotting phase I do listen to music to help set a mood or inspire a scene. Those tunes stay with me when I write. In the first book of my SFR series, Prophecy, the heroine and hero (Alex and Gryf) experience a spiritual and literal bonding of their souls. The song, Deora Ar Mo Chroi by Enya captures this moment beautifully. Another Enya tune, Tempus Vernum, can be attributed to the villain, Vyn Kotas. And when Alex and her brother, Nick, finally go into space for the first time I hear The Longships, also by Enya.

You’re sensing a trend here, aren’tcha? Lol. But wait, there’s more! The song I refer to as Alex and Gryf’s theme song is I Won’t Give Up by Jason Mraz. So, as amazingly ideal as Enya’s music is to my series, she’s not exclusive. Check out some of what’s on my iPod at the end of this blog.
Not only does music inspire me, it inspires my characters. There is a scene in Prophecy where the humans are bonding around a camp fire. My character Bodie Jones—a R&B/new-age singer—and Nick lead the group in a little sing-along. Being a professional performer, Bodie understands how music can unify people. He uses his talent to rally them together, to give them another bond beyond their shared experience of having survived a devastating alien invasion. He helps them grieve and gives them hope.

The importance-of-music-in-our-lives thread continues in Salvation, the second book in the Prophecy Series, in which Nick embraces his inner musician to the detriment of his true calling as a healer. The guitar Bodie gave him in the first book is his most treasured possession, and it’s with him—aiding him at the moment of his epiphany. By the way, Heaven Can Wait by Meatloaf is Nick’s theme song, no question.

Do I refer to music that has personal meaning to me in my writing? Sure! One of my favorite songs is Come Take a Trip in My Airship (Natalie Merchant’s version, of course. Best one out there.) Ask any member of my nerd-herd (the collective name my husband gave our five children while on a hike one day) and I’m pretty sure they know all the words by heart. During their younger years I played it quite often at home, on road trips, and while running errands. (Super secret note for all those who have stayed with me this far: “The Airship Song” will make another guest appearance in Collision, the third book in the series coming out later this year.)

Now, I have a question for you. Readers, do you listen to music while you read? Why, or why not? Authors, how about you? Music when you write, yay or nay? Leave your answers in the comments, I’d love to read them and respond.

Finally, as promised, here is a small sample of motivating music on my iPod (besides all the Enya music):

I Won’t Give Up Jason Mraz (Alex and Gryf’s theme song)
Tempus Vernum and Deora Ar Mo Chroi Enya (Prophecy’s villain’s evil theme music & hero/heroine’s soul bonding music together in one gorgeous video)
93 Million Miles Jason Mraz (Poignant song that defines Prophecy for me)
Come Take a Trip in My Airship Natalie Merchant
Deep Peace Bill Douglas (This is the song Flora sings for Alex and Gryf’s wedding, and this version is exactly what she sounds like in my mind)
Desperado The Eagle’s (Who else thinks this is the perfect theme song for the “other couple” in Prophecy?)
The Longboats Enya (Alex and Nick’s first foray into space)
Heaven Can Wait Meatloaf (Nick’s theme song in Salvation)
Anthem of My Heart Robin Spielberg (Amazingly talented pianist! I have almost as much of her music on my iPod as I do Enya’s)
100 Years Five for Fighting
Starlight Muse
Dreams The Cranberries
Feel Again OneRepublic
Come With Me Now The Kongos (Making accordions are cool again!)

Bonus reveal: Chasing Cars Snow Patrol – This is Flora and Fander’s theme song for Collision (yes, really!), and frankly the most perfect song ever, imo. This is the acoustic version.
There are more, but I’ve reached my word count limit. Lol. Thank you for dropping by, and thank you to PNR for hosting me on your blog today! 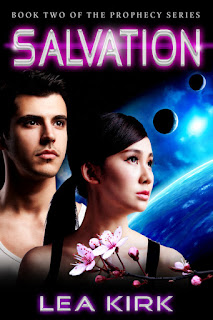 SALVATION, Book Two of the Prophecy Series
A blessing and a curse…
Seven years ago, a single moment changed the course of Nicholaus Bock’s life forever—the moment his preternatural Gift to heal awakened in him. A gift that made him an invaluable commodity to the known galaxy. Now his mentor’s intriguing and secretive new student goes out of her way to challenge his loyalty to everything he values.
A dark secret…
After facing death and destruction during the Anferthian invasion, Sakura Yamata revels in her new-found Gift to heal. Helping Earth’s survivors keeps her mind off the loss of her family, and the memory of the terrible choices she made. Nick could penetrate her defenses and discover what she’s hiding. She must not let the handsome healer close enough for that to happen.
A race facing annihilation…
When a mysterious disease strikes the hidden sanctuary of the Anferthian dissenters, Nick and Sakura are called in to help. But someone is going to great lengths to ensure the dissenters don’t survive. Nick and Sakura must set aside their differences and work together to save them before the fragile peace between three worlds is shattered.
~*~
Excerpt
Nick clenched and unclenched his fists. “I’m doing my part to help.”
Graig quirked one ruddy eyebrow at him. “What do you hide from, Nicholaus Bock?”
He blinked. “As if you don’t know.”
“Tell me.”
What the hell? “I didn’t ask for this…this…Gift, you know that. If I choose not to use it, then no one has the right to say otherwise.”
“Do you have the right to deny those in great need who would benefit from your Gift?”
Well, shit, Graig had just played the humanity card.
“Tell me where you’d be, where all of us would be, if your sister had run away from her destiny,” the Matiran said.
And now the guilt card. “Obviously, Alex is a much better person than I am.”
“No, she’s just not a selfish child.”
Ooh. Low blow. But what was wrong with trying to recapture normal? To be the person he’d been before his Gift to heal had awakened in that wide field somewhere in the highest elevations of the Sierra Nevada Mountains. His work here in New L.A. had given him the autonomy he’d craved. And it was helpful, sort of.
“The request also comes from Dante,” Graig added quietly.
Nick’s breath caught in his throat. The Matiran healer was only fourteen years his senior, but had been mentor, brother, and father to him in his hour of need. Not to mention his magister in the healing arts. Without that guidance, Nick would have been lost, his Gift potentially out of control. Scary thought: a rogue healer. It’d happened before. Not in his life time, but he’d read accounts of healers who’d used their Gift to play God, deciding who lived or died based on their whim. Even worse were the ones who’d turned mercenary, hiring out their Gift to governments or other groups. A shudder ran down his spine. Matirans could control the known universe, but their social structure kept a tight rein on its people. Is that why they were calling him back now? Were they afraid he’d go rogue?
He flattened his palms over the cushioned back of the recliner and leaned forward. “What do they want from me, Graig?”
~*~
Buy links
Amazon US: https://www.amazon.com/Salvation-Book-Two-Prophecy-Kirk/dp/1539123650/
Amazon Universal: http://mybook.to/SalvationLeaKirk
B&N: http://www.barnesandnoble.com/w/salvation-lea-kirk/1124433546
iTunes: https://itunes.apple.com/us/book/id1146204665
Kobo: https://store.kobobooks.com/en-us/ebook/salvation-62

Lea Kirk loves to transport her readers to other worlds with her science fiction romance stories. In 2016 she released Prophecyand Salvation, books one and two of her Prophecy Series, as well as All of Me, a short story set in the same universe. Another short story, Space Ranger, also came out as part of the Pets in Space Anthology. GraveTells blog named her Debut Author of the Year for 2016. Her third book, Collision, will be released in 2017.
When she not busy writing, she’s hanging out with her wonderful hubby of twenty-six years, their five kids (aka, the nerd herd), and a large Doberman who thinks he's a people.

Great post! I love, love to listen to music- but not when I'm writing. Thanks for sharing your playlist. Lots of old favorites on there, and maybe a few new ones to check out.

Thanks Maureen! And there are so many more I didn't share. It sounds like we're on the same page: Music, yes...but not in our writing caves.

Thank you for hanging out with me today. :)

I'm with you on the music, how it can inspire scenes or how certain songs just seem to fit into our stories. I listen to music all. The. Time. When I'm reading, writing, cooking, working out, whatever. Great post, Lea!

Love the post, Lea. I can't listen to music with lyrics when I'm writing. The words distract me. But I love listening to either light classical or music with foreign words, like Andrea Bocelli's Italian lyrics.

Me too, CJ! Esp love to listen while folding laundry. Makes that chore go faster. I'm surprised my little iPod Shuffle has kept up with me after all these years. :)

Thank you, Diane! I really enjoyed writing this one. If you like foreign words in your music then you might enjoy Enya's Celtic tunes.

I forgot about Enya. Love her Celtic tunes. Thanks for the reminder, Lea.

Thanks for visiting, Lea! Like you I always have a "playlist" of music for a current WIP to get my mental faculties jiving but write preferably in silence so I can hear character voices.

My pleasure, Nancy. It's good to see I'm in such good company with the need to write in silence, ladies. ;-)