Since February is the I Heart U month, I thought I’d talk about paranormal love.  For one thing, it often takes cross-racial and sometimes bi-racial love to a whole new level. Unfortunately it’s pretty easy for a fiction author to draw upon real life experiences and/or situations to write about the difficulties and emotional and/or psychological ramifications for a couple in love who are from different worlds or even species, sometimes literally. And once you get past the family and social interference, you often have more personal or intimate problems to deal with. I mean, you have to admit that having “emotionless” Spock fall in love was an inevitable challenge for the Star Trek folk.

These days, you have zombies who are no longer “humans” who eat and kill people, or others who are more comedic and struggle with keeping their body parts intact while continuing to “act” human, or still others who have tons of problems due to the whole “undead” thing, but are still involved with their live friends, family and significant others who are often helping them disguise their unnatural state of being.

Add paranormal to the mix, and now you have to consider shifting, unnatural versus natural desires, if, when, and how these changes effect the physical relationships of the characters.  If you have various species, how does that come into play between two lovers?

If love makes a paranormal world go around, as in romance novels, the author has created a world in which all the above elements come into play. The world-building involved in a well-crafted paranormal romance is complex and fascinating, which is one of the reasons fans love them.

In my Illuminati series, I had to craft a world in which off-world beings arrive on Earth as a sanctuary and like the Stargate aliens they have godlike powers, knowledge and abilities. Enter the “proof” of alien encounters in the caves of Ancient Babylon and the Pantheon of Egyptian gods and goddesses. Create a family feud, world-shattering secrets and misdeeds and you have a need to go underground. Once secreted away, you incorporate the mysterious Illuminati with a “believable” conspiracy theory and morph to modern day where you get The Book of Life with all the complexity of immortals who face the anguish of outliving beloved mortals—much like the dilemma faced by Anne Rice’s vampires. Task them with reversing catastrophic misdeeds of past generations that resulted in genetic disease and mutations that caused extreme human suffering, and pit them against power-hungry but equal rivals who think of humans as pets and slaves, and you can see why I have called my series Urban Fantasy reinvented. It’s a true mashup, a combination of science fiction, fantasy, paranormal, mystery and romance all tied together with fascinating locations and jet-setting action adventure.

That's just a taste of what goes into the series, and just a taste is what I have demonstrated in my new release novella STOLEN SECRETS.  If you’re interested in reading for an honest review, please follow this link:  https://www.instafreebie.com/free/0vePX 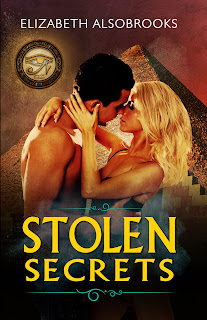 Offered an enormous sum by an anonymous benefactor for the acquisition of an ancient ceremonial relic, a sum that would keep the antiquities shop in Cairo her father left her afloat while she continued her own archaeological pursuits, Lady Isabella Valentine was distracted rather than tempted, then suspicious, when the dashing young Bedouin slipped in just before closing and promised her a deal she couldn’t refuse--for the very same relic. Despite his sensual appeal, she did refuse him, sending him away.

Prince Mukhtar, son of Sheikh Abdul Kummel al-Rahman, leader of the Hassana, is on a sacred Illuminati mission for Queen Isis to retrieve something stolen from one of her temples over a thousand years ago. This mortal disbeliever though an enchanting English rose, however beautiful she might be, is clearly in the power of the Usurper and must be persuaded to help him, one way or another. But neither of them know of the evil power they are up against, or what hidden dangers await them in the tomb of the high priest.
Posted by Elizabeth Alsobrooks at 11:50 AM

I always enjoy reading how an author does up with their stories! Best and Blessings!

Thanks, Maureen. That's so true.

Glad you enjoyed it, Diane.

Thanks, Darcy. I like to read about another author's take on their world building too.

Aw, thanks, Nancy. Coming from you that's huge praise indeed. I appreciate the support!

I just love the intricacies that go with a supernatural creature falling for a mortal, and in the paranormal world there are so many ways to act on it/deal with it that it's so much fun to see how each different author puts their own spin on it. Your Illuminati world sounds awesome!

Thanks, CJ. I'm with you. I love to read paranormals for that very same reason.