LOVE/HATE RELATIONSHIP WITH YOUR NOVEL 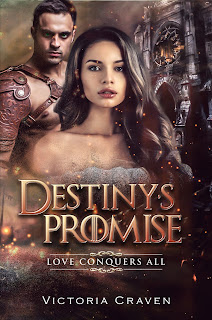 My new book, Destiny’s Promise will be coming out within the next couple of months. It was a project I loved and hated at the same time.  I loved the story and the characters, even the antagonist, Disa. She was a character I enjoyed creating, not just as the bad guy, but a complex individual. I loved writing Carina and Randolf’s story and their love that spanned over two lifetimes.
It was a great experience expanding Randolf’s character, going from a secondary character to the hero of his own story. If you read my other two books, Randolf powers will surprise you.  Carina is the woman I always wanted to be. Her independence and compassion is compelling. Over two lifetimes the tether of love could not be broken between the two of them, despite Disa’s vow to separate their souls and banish them to desolation.

As I said, I hated this book at the same time. In my mind I knew the beginning and the end and all the events in between, but it was the details that had to get them from one scene to another that was a challenge. I kept thinking, “How do I get from here to there?” and I spent a great deal of time playing every scenario that would make it work. As a writer, wouldn’t it be nice to know everything, from beginning to end including all the details in between. I envy the writer who can breeze through it effortlessly.

Don’t get me wrong I love my stories. My head would explode if I didn’t get them written down, I just had a love, hate relationship with this story, but I persevered and made it one of my best projects.
I can’t continue without saying my husband worked with me side by side editing this book. He challenged me to dig deeper into the characters and plot. I grew angry with him sometimes, telling him, “I can’t,” but he always said, “you can.” I was exhausted at the end of each night after answering the really tough questions. I can’t tell you how much his input helped me as a writer, and for that I will always be grateful.

For you writers out there, do you sometimes love and hate you work?

Destiny’s Promise
Disa is in love with Arys, but he’s in love with Carina. Out of heartache and rage she murders them on their wedding night and vows they will never find happiness together. Now the two souls are about to reunite.  Disa makes a pact with the red demon to destroy Carina’s soul so she can never be with Arys again. On his deathbed, the sorcerer who raised Carina tells her she’s in grave danger and only the Black Knight can protect her. But she has no idea who the Black Knight is or where to find him, and she’s being evicted.
Randolf, known as The Black Knight, is a powerful warrior and possesses strong magic, but he is plagued by dreams of a woman pleading with him to find her. After yet another dream, restless and frustrated, he goes to a local inn where he encounters Carina. She’s familiar but he doesn’t know why. Not then. Will their souls reunite before Disa carries out her diabolical plans?
EXCERPT:
He lay dying on the terrace floor. His life’s blood flowed from the gaping wound across his throat. The light was beginning to fade. Stars in the night sky watched as his life drifted away.
His dead wife lay beside him. Her face was splattered with blood, and her eyes vacant. Her soul had already departed. Tears ran down his face as he clutched her hand. The amulet he gave her as a wedding gift signifying their love was now defiled with blood. “Until the next life,” he whispered as his spirit let go.
A small brilliant light pierced the darkness. He was drawn to it as it grew larger and more intense. Soon it saturated him with love and warmth. There was no pain, no sorrow, and no regret.
His spirit traveled through the light. When his journey ended, he found himself standing in the middle of a meadow where flowers of every color graced the landscape. In the distance, mountains rose out of the ground with blue-green water falls cascading down their rocky surface. Birds with a myriad of hues glided on the air currents above him like kites. The sweet smell of lavender and new grass wafted to his senses while soft lyrical music floated on a breeze, welcoming him with their song. He was overwhelmed by its beauty, and was immersed in pure bliss.
“Aris!” she shouted as she crested the hill. He ran to her and scooped her up in his arms.
Her brilliant smile filled his heart with glorious joy, and when she laughed her spirit grew brighter.
She covered his face with kisses as tears of happiness streamed down her face. “I thought I lost you,” she cried.
“You will never lose me, my love.”
She looked around. “Where are we?”
“We’re somewhere in the heavens.”
She touched his face. “For eternity.”
Something in his heart told him it wasn’t. He pulled her closer, “This place isn’t for us-not yet.”
Her eyes looked wary. “What do you mean?”
He caressed her face. “Our lives were cut short and we must go back.”
“We can’t go back, Aris. Our lives as we knew them are gone.”
“We’ll travel in different lives.”
Her eyes widened with panic. “No. If we leave here, how am I going to find you?”
“I’ll find you.”
“No, Aris, stay here with me,” she said wrapping her arms tightly around his waist.
“That is my deepest desire, but even now the new life pulls us apart. It’s what has to be done.”
He held her tightly, as she desperately clung to him. New tears ran down her face filled with sorrow. Seeing her pain clawed at his heart. “You must promise to find me, Aris. Swear you will find me.”
“I swear, I will find you.” His lips touched hers. Their souls wove around each other like coils in a rope. A heavy wind of earth-bound life began to pull them apart. He fought the clutches of the unseen, but his struggle was futile. She reached out to him, as her spirit was being pulled away.
“I love you, Aris,” she cried out over the roaring wind.
“I will find you, Carina. I promise.” His spirit floated into the mist of the mountains. “I love you,” he shouted, but she was already gone, yet still her voice echoed, “Find me Aris. Find me.”

We all have that relationship with our WIPs. By the middle, I'm so irritated with my characters I don't know why anyone would like them but then I fall in love with them again . . . probably because they're doing the same with each other.

Love/hate each book. Usually hate after the 15th reread after revising, editing, proofing. By the time it's published, I don't want to see it ever again. Then I read it for a quote or except and I love it again. Best wishes.

Oh, I definitely sometimes share that vexing problem of the best way to get from point A to point B! Good luck with your upcoming release. :)