The natural evolution of reading

A couple of, ahem, decades ago, I was chatting with a coworker and he asked what I was reading. I don’t remember what book it was, but likely a fantasy, probably even Game of Thrones. He said, with utmost confidence, that I’d tire of books like that—because they’re not real life. I remember thinking, Um, hello? That’s why I read them.
We all have different tastes and reasons why we read what we do. I was a diehard fantasy reader. Diehard. I had rarely read anything other than fantasy since I pilfered my mom’s David Eddings books in elementary school. The tattoo I got when I was eighteen is a sword. It looks more like a butcher knife now because I don’t have eighteen year-old ankles anymore. However, like the evolution of my cankles, my reading tastes morphed…and I grew pickier. I’d scour the blurbs looking for that special element, the one that’d never fail to sell the book to me.
Romance.
After combing several books one night in Barnes and Noble, it dawned on me. Why not just read romance?
Over to the romance section I went. Foreign land. Full of new books I had yet to peruse. Full of new-to-me authors. But where to start?
I picked up a few contemporary romances. A friend passed on her collection of mostly historical romance. I raided library sales. I devoured romance. I enjoyed many books, but hadn’t attached to an author the way I did when I read fantasy.
Then it happened. I stumbled onto a Sherilyn Kenyon book, Night Pleasures. A sexy vampire—with a whole bunch of sexy vampire friends. Yes, please. Then came J. R. Ward. A little Christine Feehan. It was a natural transition from my previous fantasy obsession.
But then came my first kid.
Reading? What’s that?
I didn’t put down books because I didn’t have time to read. I set them aside because I got so irritated at the little bugger when he interrupted my reading time. Kid, the hero just betrayed the heroine, only she doesn’t know he really didn’t betray her, and the bad guy just kidnapped her, and you want your sippy cup refilled?! Why do I gotta stop for Winnie the Pooh? I have my own reading needs!
Enter magazines for the next several years until kid number three. By then I’d left my career to be a full-time sippy cup refiller. I needed, neeeeeeeeded, an escape. I’d kept up with Sherilyn Kenyon and J. R. Ward but I sought more authors. Not just books. I wanted a writer who’d constantly supply me with an escape worth hiding in the laundry room with a smuggled chocolate bar for. Back to the library. I brought home some Gena Showalter books. From there, I made my way to Kresley Cole. More, I needed more!
Thank you also boughts for bringing me to Larissa Ione and Laura Wright. I was steeped in paranormal romance.
Now, it’s my magazines that rarely get read and books that I cruise through. I have four kids and no shame when I need time to read. I call it the curse of the last twenty pages. Every living being under the same roof as me will swear their world is ending while I’m trying to finish a book. My husband knows when I tell him I have fifty pages left that he needs to run interference so I can finish. A month ago, it was my turn to sleep in. I spent two hours finishing J. R. Ward The Angel’s Share. Not one interruption. Suh-weet.
When I become a writer, paranormal romance was a natural genre for me to write. Developing a career as a writer brought me to contests. Entering a hundred million contests brought me to judging. I signed up to judge the RITA (the Oscars of romance books). When that package of books dropped on my doorstep one cold January day, it was like Christmas came back for seconds.
I’m a judging addict. I don’t care what contest, I’m signing up to judge it. Aside from helping me become a better writer by determining what works and what doesn’t and why, it exposes me to other romance sub-genres. I got a regency romance in my last RITA packet and I fell so hard for it, then had to rush out and find the first two in the series. There was also a contemporary romance that I probably would’ve passed over because I’m not often diving into contemporary that doesn’t have super soldiers or rugged cowboys. It was so good! And a really late night because I had to finish it!
My romance reading evolution seems to be expanding what I read, which is pure awesome because I’ll find even more happy-ever-afters! 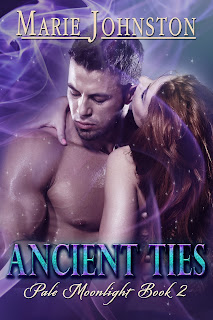 Born to be Guardians…
Chayton Eagle comes from a strong line of wolf shifters, his father an ancient in their pack. Chayton proudly acts as a Guardian, defending the colonies from danger –both from outsiders and from threats inside the pack. The one thing he doesn’t need is a human-raised female on his team—especially not one who passes out each time she shifts! Never mind that she was trained by elite Guardians, Chayton doesn’t need the distraction of a tall, willowy, sexy-as-hell redhead when he’s working. He has to focus. And he has to remember he’s scheduled to take the blood oath with a female, a long-ago pairing, arranged by her parents. It doesn’t matter he and Kaitlyn are fated mates.
She can’t be his. Not now. Not ever.

Destined to be Mates.
Kaitlyn Savoy knows Chayton is supposed to be her mate. Too bad he’s such an ass about her human upbringing making her weak. Too bad she’s been assigned as his partner to take down the feral shifters threatening one of the colonies. Too bad she’s so damn attracted to him. As the mission continues, Chayton is captured by the ferals, and Kaitlyn proves her worth as a Guardian. During the rescue, she uncovers the secrets of her past, secrets that will affect her future. Despite his best efforts, Chayton’s opinion of her begins to change, his respect growing—along with feelings he can’t deny. She’s become part of his life, part of his heart. A fact his soon-to-be inlaws notice—and they intend to put an end to the temptation Kaitlyn poses to Chayton.
No matter what.

Chayton stormed to his cabin.
A four-hour drive. With Kaitlyn.
Spending the night. With Kaitlyn.
Roaming the woods. With Kaitlyn.
His heart pounded, his nostrils flared, and he huffed like a bear after a marathon. Slamming his front door open, he charged through and kicked it shut behind him.
Only then did he double over, hands on his knees, sagging to catch his breath.
Kaitlyn Savoy.
The sexiest thing he’d ever laid eyes on.
The shifter he was never supposed to meet. His mate.
And she was oblivious to it.
He stomped through his cabin. Her lack of mating insight was for the best. If he had his pick of shifters, she’d be the last on the list. Besides, he was promised to another. Kaitlyn was young yet, and based on her blasé-to-distasteful reaction to him, she’d have no trouble moving on. Or not. Her sanity may last longer than most who don’t anchor their souls with a mate. But if she needed to bond, she wouldn’t have a problem finding someone. Like that bartender at Pale Moonlight.
His fangs bared and a growl escaped before he stopped himself. Chayton had never caught her with him, but stories had it the bartender helped her assuage the physical needs experienced by shifters of their caliber. She hadn’t been with the guy in the months Chayton had been around. That decision had increased the bartender’s life expectancy considerably.
No. No. It shouldn’t matter. She would find someone to mate with and he had no say with whom. Chayton straightened and wiped his brow dotted with sweat. It was always an effort to contain his reaction around that female.
Why her?
Ancient blood—pure, undiluted shifter blood—ran through his veins, thanks to his father. His Sioux mother would roll over in her grave. Chayton’s bloodlines were rich with history and honor.
The female he’d sworn himself to, Tika, would make a lovely mate instead. Soft brown eyes, feminine curves, and ancestry as strong as his. In fact, she was coming of age soon. For him, that was twenty-five. Her parents had pushed for their union when she turned eighteen, but that had seemed too pervy for him. At two hundred twenty-nine, he wasn’t about to jump a girl the second she was legal. If it was up to him, he’d wait even longer, but even Tika had pushed for their binding.
His stomach rumbled, alerting him that he’d missed dinner. Not that he’d eat at the main lodge anyway; it was a tactic he used to avoid Kaitlyn.

Author Bio:
Marie Johnston lives in the upper-Midwest with her husband, four kids, and an old cat. Deciding to trade in her lab coat for a laptop, she’s writing down all the tales she’s been making up in her head for years. An avid reader of paranormal romance, these are the stories hanging out and waiting to be told, between the demands of work, home, and the endless chauffeuring that comes with children.

I loved you blog. I have to say I've lived your life.

Welcome, Marie. Loved how you got into writing paranormal romance. Each of us come at the writing game in different ways. In the end, it's all about the story. Best wishes.

Oh yeah. I used to be the same way, reading only fantasy. It was only by chance that I read my first romance, but I was hooked! There's nothing better than a fantasy romance. Thanks for the fun post!

Hi Marie, enjoyed your post. I also read to escape daily doldrums. I'm a Harlequin romance reader from way back but always searched for paranormal romances which I don't remember being plentiful back, ahem, a long time ago. :) Love Kenyon, Feehan and, oh my gosh, Lynsay Sands - vampires, romance, and a generous dose of laughter - who could ask for more. Thanks for stirring memories!

Humor? From a Romance writer? Love it! Very enjoyable and realistic view of reading patterns in life, especially for moms. No more sippy cups now; just a good cup of coffee and the computer at six A.M.!

I love your reading progression and especially judging as a way to find new readers. :) Do you, by any chance already judge the FF&P Prism contest? It's fantasy, futuristic, and paranormal romance only!

I enjoyed your post and especially related to wanting to escape from the real world with paranormal and fantasy- who wouldn't?

Thank you for letting me stop by and chat :)
I have judged the Prisms before and can't wait to see another packet show up in a couple of months! Happy reading everyone!!