Thank you to the Paranormal Romantics for having me as a guest.  I’m excited to be with you today!

I’ve always loved a good whodunit.  Considering that I devoured every Nancy Drew mystery I could find, that’s not surprising.  So when a classmate (and fellow history major) handed me Josephine Tey’s The Daughter of Time and said, “You have to read this book,” I was intrigued.

The story is about a Scotland Yard detective who’s laid up in the hospital and becomes interested in the National Portrait Gallery portraits of Richard III and Henry VII.  Studying them and reading other materials friends bring him leads him to conclude that perhaps Richard III was not so very villainous after all. While I wouldn’t recommend character analysis based on a portrait painted long after its subject’s death, the issues raised by the story interested me enough to dig further.

I learned that there was ample evidence to contradict Shakespeare’s villainous Richard III, and the more I read, the more convinced I became that the king deserved at least the benefit of the doubt.  Most of the Shakespearean charges against him are fairly easy to dismiss, but it’s inarguable that his nephews dropped out of history’s pages during their uncle’s reign. What happened to them?

The Tower of London was a royal residence as well as a prison for nobles charged with serious offenses.  Many people worked there, in the residence, the prison, and the grounds.  Edward IV’s sons had household attendants. If the boys rode out with someone, or suddenly weren’t there anymore, many people would’ve noticed. And yet, no one at the time reported whatever happened.

Naturally, that kind of mystery is appealing to a writer.  It kicked off a round of “what if” that led me to what would happen if a wizard unwittingly used his magic to smuggle the boys’ killers into the Tower and their bodies out, all unseen? How would that wizard feel when he learned what he’d really done?

In my forthcoming Boar King’s Honor Trilogy, which launches with The Herald of Day at the end of this month, the wizard is overcome by guilt and remorse.  He throws himself on the king’s mercy and is ordered, because of the political situation, to keep his secret until the king tells him to speak up.  Only King Richard then rode off to Bosworth Field, where he was killed. Henry VII became king.

Having a weak claim to the throne through a bastard line, Henry sought to smear his predecessor’s reputation to make himself look better.  History, after all, is written by the victors.  And Shakespeare wrote his Richard III during the reign of Henry VII’s granddaughter.

The wizard, Edmund Mainwaring, dared not speak while the Tudors reigned.  Desperate to atone for his part in the murders of two boys and in the tarring of a good king’s reputation, he swore that neither he nor his descendants would rest in life or death until they could prove the truth about the murders. When they die, they can’t pass through the portal to final judgment but are trapped in a shadowland between the worlds of the living and the dead.

Edmund sought justice, never dreaming that the blood curse would endure for generations. Fast-forward a couple of hundred years, and the Mainwaring living with the curse is Richard, Earl of Hawkstowe, the hero of The Herald of Day.  Having seen what the family curse did to his parents’ marriage, with his mother resenting his father for the burden Richard bore and his father desperate to remove it, he has sworn to be the end of his direct line.  No more of his family will be condemned to the shadowland or go mad because of the Edmund’s vow.

He holds to his resolve until a magical summons brings him together with Miranda Willoughby, a powerful but untrained Seer.  Attraction sparks between them immediately, but she thinks he’s out of her league, and he foresees only tragedy if they act on their feelings.  As history changes and reality shifts because of a powerful wizard’s plan, Richard desperately holds to his course--until a near-disastrous event forces him to realize how much she means to him.

But how can he bring her into a union that will be doomed by resentment and anger, as his parents’ was?  How can he sire children who’ll share the curse?

I had great fun writing The Herald of Day, digging into the history of the Wars of the Roses and Richard III.  Now I’m enjoying the research for the next book, The Steel Rose, which has a climactic confrontation at the Battle of Waterloo. The final book, The King’s Champion, takes place during the World War II Battle of Britain, between the evacuation of Dunkirk in May 1940 and the start of the Blitz that fall.

I’ve written contemporary paranormal romance, but The Herald of Day is primarily historical fantasy and alternate history.  It does have romantic elements, though, as you can see from what I’ve said above, because I just don’t enjoy writing a story as much if there’s no romance in it.

What about you?  Do you read genres with little or no romance?  Do you have a favorite historical period?  Do you have any questions about Richard III or the Wars of the Roses?

Thanks again for having me! 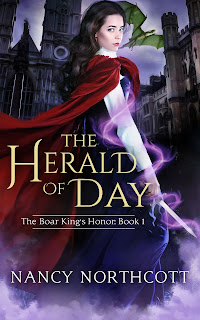 Book 1: The Herald of Day

In 17th-century England, witchcraft is a hanging offense. Tavern maid Miranda Willoughby hides her magical gifts until terrifying visions compel her to seek the aid of a stranger, Richard Mainwaring, to interpret them. A powerful wizard, he sees her summons as a chance for redemption.  He bears a curse because an ancestor unwittingly helped murder the two royal children known as the Princes in the Tower, and her message uses symbols related to those murders.

Miranda’s visions reveal that someone has altered history, spreading famine, plague, and tyranny across the land. The quest to restore the timeline takes her and Richard from the glittering court of Charles II to a shadowy realm between life and death, where they must battle the most powerful wizard in generations with the fate of all England at stake.

Excerpt from The Herald of Day:

This is from Chapter 1.  Miranda works as a tavern maid and so is selling bread at the hanging of a local woman for witchcraft.  Because of Miranda’s own powers, she knows the woman is innocent, but saying so will only gain her a slot on the gallows.  Desperate to ease the woman’s passing, she wishes she could do something, and then…

Wrenching pain lanced through her head, and the crowd vanished. Purple-gray mists swept around her, swallowing the shouting, hooting voices.
Beneath her feet lay solid shadow, and the nasty odor of rotten eggs pervaded the dank, foggy twilight. Her neck and arms tingled with magic. With cold foreboding.
The fog receded, revealing a white boar--with blue eyes, not small, black, piggy ones--lying on a carpet of deep blue bordered in mulberry. It struggled to rise, its eyes dark with pain and mute appeal that wrenched her heart.
Above it loomed a red dragon bugling in triumph. White and green striations shimmered on the undersides of its spread wings. Blood dripped from its talons and flowed from gouges in the boar’s side. She’d always loved tales of dragons, but this one’s joy stabbed into her with the certainty that the creature was evil.
Summon the boar’s knight, said a voice in her head.
Knight?
As she backed away from the gory tableau, the reeking fog closed around the images. A man’s face flashed into her mind, his strong, stern features framed by a knight’s helm. Clad in gleaming, silver armor, he galloped a black charger through the swirling vapors to confront the dragon.
On his left arm, he bore a shield emblazoned with twin stripes of mulberry and blue down the middle and a white rose backed by the rays of a sunburst in the center. Etched boars and sunburst roses covered his armor.
Beneath straight, dark brows, his blue eyes narrowed as he eyed the dragon and its prey.
If he opposed the dragon, did that mean he was a force for good? Her instincts said yes, but how could she know? 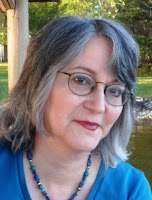 Nancy Northcott’s childhood ambition was to grow up and become Wonder Woman.  Around fourth grade, she realized it was too late to acquire Amazon genes, but she still loved comic books, science fiction, fantasy, history, and romance.

Nancy has written freelance articles and taught at the college level. She has also given presentations on the Wars of the Roses and Richard III to university classes studying Shakespeare’s play about that king.  A sucker for fast action and wrenching emotion, Nancy combines the magic, romance and high stakes she loves in the books she writes.

Reviewers have described her books as melding fantasy, romance, and suspense. Library Journal gave her debut novel, Renegade, a starred review, calling it “genre fiction at its best.”

Hi Nancy and welcome to Paranormal Romantics. I must have romance in books I read and, as most of my stories and those I read are contemporary romances, must say that's the period I love most. I do enjoy a good historical romance though.

Welcome, Nancy. Fascinating history. Like Hali, I have to have romance in the stories I read--or at least a hint of romance. Relationships mean more to me than straight history or sci-fi. If a character is a loner, I want to see him or her change because of a friend/lover. Best wishes.

Thanks! I read contemporary romance, too, and especially like it to have sone suspense elements.

Okay, that's soMe suspense. *sigh* Where's autocorrect when it could actually be useful?

Thanks, Diane. I've never written a true loner character. Griffin Dare, the hero of my paranormal RS, Renegade, tends to hold himself apart from his friends at times because he's a fugitive and diesn't want them to risk being caught with him. But that's only only to an extent. He does have friends. I think it would be very hard to write a character who had no one, at least for me.

Welcome! I do read outside of romance- suspense, horror, YA, chick lit etc. I only dabble a little in historical. I enjoyed your post!

Thanks! I also read suspense, and some historical fiction, but I like historical romance more than mainstream historical.

Oh, wow! Your story sounds amazing, and I love historical fantasy, although I tend to avoid mysteries...I rarely can figure them out, and it drives me crazy. :) Thanks for the great post!