"Lieutenant Girl, Report to the Bridge. We're out of Coffee" The Sometimes Weird World of Women in Science Fiction by L. A. Kelley. (Plus a free ebook for you!) 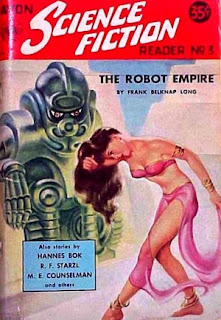 Science fiction has come a long way. The genre had roots in the nineteenth century stories of Jules Verne and H. G. Welles, but exploded as a genre after World War II. As technology advanced and women were allowed to embrace more professional roles, science fiction began to reflect a changing world. Instead of characters whose sole purpose was to be saved by the hero, women began to serve alongside them fighting monsters and alien hordes. Often they appeared as scientists, but the division of labor was hardly fifty/fifty. Even a female scientist still had to serve coffee and be slave girl to a robot.

Who Was That Masked Man? Oh, He’s a She.
Why a robot needs a slave girl is beyond me, but then it was a male writers’ world. Science fiction publishers (an all-boys club) dismissed women’s manuscripts unopened if they didn’t use male or gender neutral pen names to disguise their identity, believing men wouldn’t read a story written by a woman. Alice Norton became Andre Norton to hide the woman behind the words, and also wrote under Andrew North and Allen Weston. Carolyn Janice Cherry became C. J. Cherryh, Alice Bradley was James Tiptree, Jr., Even as late as 2001, Joanne Rowling used the pen name J. K. Rowling at the insistence of the publisher.

Roles in science fiction movies have improved since the fifties. Occasionally, a woman will even nab a lead, but screenwriters are almost exclusively male, so the differences between the way men and women are treated in dialog and action sequences can be eye-roll worthy, if not downright bizarre. Case in point is the film Prometheus. The heroine, Elizabeth Shaw, needs an alien entity removed from her body. Luckily, nearby is a robotic medical surgical pod. Oh darn, it’s only designed for men. She has to drag herself down the passageway to another one for women.
Say what?

Yes, apparently scientists can send a spaceship hurtling across the galaxy, but scratch their heads at constructing a single medical facility to care for male and female crew. (Hello, Mr. Male Screenwriter, they’re called sick bays.) Curse those lady parts. They’re just so darn complicated. Can you imagine a man in a science fiction film ever facing a similar dilemma? You’d never see a bunch of female doctors standing around scratching their heads. “So sorry, we can’t help you. It’s the testicles, you see. They’re icky, and we can’t figure them out.” 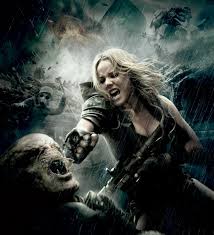 that of a hero. She goes from girl or woman on a quest to the climax where she confronts the antagonist. Often, fighting is not merely one of the options offered for victory, it’s the only one. Except for her gender, she’s pretty much a clone of the guys. Displaying feminine traits is even used as an insult. How many times have you come across a variety of, “What are we, a bunch of girls?”

This is a crying shame. Don’t get me wrong.  I like warrior women. They can be lots of fun, but why do they seem to be more of a requirement and less of an alternative, particularly in science fiction books and films? Why do female and male characters have to always be so darn similar? Why can’t a girl show a softer side without being thought of as weak and not as good as the boys? Why must she  fight more than she thinks?

Smart girls can be done well. Two recently acclaimed science fiction films, Gravity and Arrival, both had female leads and neither one packed heat. Teenager Meg Murry in A Wrinkle in Time is both smart and brave and doesn’t need ninja training to rescue her father or brother. All the women in Andy Weir’s The Martian are intelligent, strong, and engaging individuals. I suspect not one of them ever picked a bar fight. 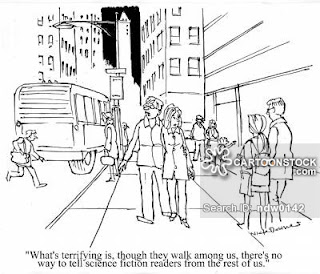 There’s no need to toss warrior women. They have a place, too, but I say add more clever girls to the mix; tough, brave, smart girls who don’t realize their abilities until put in an impossible situation and their true strengths shine. They don’t have to walk, talk, and act like the boys to get the job done or always rely on magic or a gun. They can have both hobbies and adventures and be brave, loyal, true leaders who understand femininity doesn’t equal space slut in spandex with her boobs hanging out. Then maybe the next time someone says, “What are you? A bunch of girls?” the answer will be, “Absolutely, and you’re lucky to have us.”

A Special Free Offer for You!
To celebrate the release of book 3 in my YA space opera, book 1, Rimrider, is free on Amazon. The series has smart females of all ages, and the heroine, Jane Benedict, is brainy rather than brawny. Hurry, offer ends February 28. 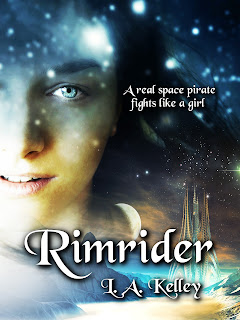 Teenager Jane Benedict is awakened by her father and ordered to memorize a mysterious code. Hours later, Mathias Benedict is dead and Jane and her brother, Will, are wards of United Earth Corporation. To evade the company's murderous clutches and uncover the meaning of her father’s last message, Jane leads Will on a desperate escape across the galaxy aboard the Freetrader smuggler ship, Solar Vortex. Tangled in the crew’s fight against UEC, Jane saves the life of young smuggler Mac Sawyer and learns her father’s code identifies a secret cargo shipment that can spell doom for the entire Freetrader cause and the extinction of an alien race.

Piracy, intrigue, romance, and a daring rebellion from Earth wait on the planet Rimrock. Will Jane answer the call to adventure and find new purpose on the galactic rim or will death for high treason be her fate?

L. A. Kelley writes scify/fantasy adventure books with humor, romance, and a touch of sass. She’s never picked a bar fight, but could if she wanted.

Email ThisBlogThis!Share to TwitterShare to FacebookShare to Pinterest
Labels: Free Reads, L. A. Kelley, Lieutenant Girl Report to the Bridge We're out of Coffee, science fiction, Women in science fiction

I loved this piece, but I can't have a real serious opinion since I'm just a female. Thanks for the morning smile and serious insights.

Right on with the gender roles! Meg in A Wrinkle in Time was always one of my favorites, how she overcame her doubts, was an all-out nerd (which, back then, was not at all popular as it is nowadays), and still got the guy, using her mind and love as weapons. Great post!

Great blog! You are absolutely right about the woman's traditional role in science fiction. I'm glad you broke through the stereo type.

Agreed with this entire post! Great job. And thank you for the book.

Thanks for the book, L.A. I'm looking forward to reading it and your new release. Great post. Women's roles in sci-fi reflect that of the culture of the times. After the men returned from WWII, the women who built airplanes, etc. were told to go home and be good little wives so the men could take their jobs. In books and movies, I want the women to be strong with a soft side. I want the men to be their equals. Best wishes on your new release.

Awesome post! Wrinkle in Time is one of my all time favorite books and Ellen Ripley my favorite action hero(ine, in a role written for a man). I adored Arrival for its smart character choices (Did you see the guns on the science nerd? Geez, he could have been a bow-wielding super hero!). I love it when smart and brave aren't gender exclusive.