Lion shifters!! I love shifters and wanted to write a story where they lions come out on top. This is a fun, sexy new series and book one is already out. Mix one sexy man with a lion shifter who has no idea he's a shifter. There will be hot results! Check it out!! 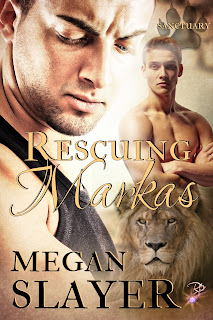 The love of his life will bring out his roar.

John Dallas has lots of money, but no real direction in his life. He cares for lions at a local petting zoo where people can pay to pet the cubs. He’s heard stories and read about shifters—creatures who can shift from an animal form into a human form. Seeing the lions makes him wonder if those lions can shift. When he witnesses an act of cruelty to the lions, he finds his purpose in life—to save the lions.

Markas knows he can shift, but hasn’t yet. He’s fascinated by John and wants to shift in order to get to know the human better. But lions don’t last at the petting zoo past their third birthday. Once he’s at the age of being moved, he’ll lose his chance with John. Will John accept him his his human form? He’s determined to shift and snag the man of his dreams.

What will happen when the shifter and the human are thrown together by fate? White hot sparks.

John’s breath clogged in his throat. He’d gotten three of the four lions out of the enclosure and into the adjacent farm, but Markas hadn’t made it past the hole in the metal fence. Fuck.
“Joe, I need your help. Now.” He didn’t wait for his brother to answer. “I’m getting the sheet and tossing him onto it. Not the best way to move a lion, but this one is a sweet boy, and he’s hurt. I can’t let the hunters have him.” Don’t let the bullet be in his chest or his head, he thought. Let them have hit him somewhere that’s not life-threatening.
“You tell me when to pull and I’ll do it.” Joe appeared at the hole. “I’ll keep watch.”
John scrambled around the cat, hefting the animal’s legs onto the sheet and then moving his upper body to the sheet as well. Gunfire rang out over his head, making him wince. He’d never been in combat and knew he wasn’t meant for a soldier’s life, but if he could save the beautiful animal, he’d take a few gunshots whizzing past his head.
Let’s just hope they don’t connect with me, too. “Pull. Joe, pull,” John shouted. With his brother’s help, John managed to get the cat to the hole in the fence.
“He’s heavy,” Joe groaned. “I’ve got him, but damn. What are you going to do with him? He’s been shot?”
“I know. I’ve got Willow Needs coming over. She’s a trained veterinarian.” John yanked one last time, getting the lion through the fence. Once they were all safe, he shoved the planks back into place. “There.” He turned his attention to Joe. “She’s been lobbying since high school to get this place shut down. She’s all onboard to help us.”
“Good,” Joe replied.
John checked the wound. Whoever had shot the cat had managed to hit the target but hadn’t buried the bullet deep. Still, the hole was high on the lion’s hip. They’d need to get him to the barn soon.
“I’ve got the others on the trailer. They went pretty easily.” Joe stood beside John. “Ready to put him in the truck?”
When John glanced up at his brother, Joe’s eyes were wide. “What?” John asked.
Joe opened and closed his mouth a couple of times before he spoke. “I don’t think we’ll need the trailer for him.”
John looked back at the covered-up hole. No one was trying to get through. “What is your problem?”
“Your lion is a guy.”
“What?” John stared at his brother. “Did you get hit on the head? He’s a lion.”
“Look.” Joe pointed to the big cat, except the cat wasn’t one any longer. Joe was right. A man lay crumpled against John’s hip.
John met his brother’s confused gaze. He had plenty of his own questions. Some of the lions at the petting zoo really were shifters. Dear God, they’d been bred so many times. It was possible some used for the canned hunts could’ve been shifters, too.
His stomach lurched.


“I’ve never seen one in person, but we’ve got a shifter.”

​
http://wendizwaduk.com/indexMegan.htm
Megan Slayer - It's Always Fun to Squirm
Subscribe to our newsletter ~ http://ymlp.com/xgjmjumygmgj
Posted by Wendi Zwaduk and Megan Slayer at 12:00 AM