In her post last month, Elizabeth Alsobrook mentioned that teachers bemoan the fact that kids don’t have imaginations or creativity any more. Instead of playing make-believe, they play video games. While I think there’s some truth to that, I also beg to differ. Many video games are imaginative. The player assumes a make-believe identity. They have to stretch their imagination to go on quests or use their wits to defeat the enemy. As with any games, television, or movies, a constant diet of them can dull the senses.

Having said that, I also think that parents don’t help their kids to use their imaginations to play make-believe. Remember when the best "toys" were boxes? Or when a blanket thrown over a table became a fort or a magical cave?


As many of you know, my son and his family stayed with us for two months this summer while they looked for a house. During that time, I spent a lot of time with their two-year-old. Once a day, we watched “Daniel Tiger’s Neighborhood” inspired by “Mr. Rogers Neighborhood.” (remember that show?) During the half-hour program on PBS, Daniel enters a make-believe land where he and his friends play make-believe. Toddler Girl avidly watched the show, nodding her head when Daniel asked if she wanted to play make-believe. In one episode, the children constructed a make-believe spaceship out of cardboard. When my older (7.5 and 10) grandchildren came over to play with their cousin, they found a good-size box I was going to throw out. Together, using scissors (the older kids), crayons, markers, and stickers, they built a spaceship. The older kids tugged the ship around the room as they “zoomed” to the stars and planets. Another time, Toddler Girl used a clothes basket for a boat and sang “Row, Row, Row Your Boat” (she only knows the first three words of the song) as she scooted across the floor.

Games like that exercise the imagination. But how do they get started? Reading. I always read to my children. Now that they are parents, they and their spouses read to their kids every night. When Hubs and I babysit, we read to them before bed, too—at least we did until they said they could read faster and asked us not to. LOL 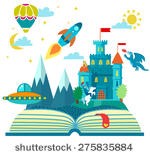 It’s too easy to let the kids watch TV on their own, or play video games without input from the parents. If our children (as a whole) are lacking in imagination, it’s because they don’t know how. Encouraging them to play make-believe is essential before they start school. When Toddler Girl watches “Daniel Tiger” she sits on my lap. I talk to her during the episode, asking questions to keep her engaged. I did the same when the older grandkids were little.

One thing I did with the older ones that I can’t wait to play with TG is My StoryMaker, an online program from the Carnegie Library of Pittsburgh. The kids write their own stories with avatars for characters, hints for goals, action, and conflict. I introduced the grandkids to it when the oldest was four. Eventually, the younger one wanted his turn. They told the story while I typed. Using the touch screen, they could add characters, scenery, tools and other items. Each time, I was blown away by their imaginations. The best part was we could print out the story for them to share with their parents.

While I agree that many kids today aren't given enough chances to play make-believe, parents or grandparents need to give them those opportunities. I’m fortunate that I’m retired and my grandkids all live close by. I have the time and patience I didn’t have as a young mother. For the ultra-busy parents of today, there must be a way to carve out a half hour to read and/or play make-believe. By doing so, we are feeding their imagination, which is as necessary as feeding their bodies.

If we as parents, aunts/uncles, grandparents don’t feed those imaginations, where will the future writers, artists, screenwriters, visionaries come from?

Great post! I couldn't agree more- reading is essential and encouraging the use of imagination. When the girls were small and we went to the beach we'd sit on a bench on the boardwalk in the evening and as people passed we'd take turns picking a random person and say, "What's their story?" The stories the girls made up amazed me and they had fun playing the game.
P.S. I loved Mr. Rogers neighborhood!

What a fantastic game. Watching Mr. Rogers or Daniel Tiger through the eyes of a 2-yr-old is a wonderful experience.

You're so right, Diane - imagination has to be encouraged! I think some people are naturally inclined, but others need all the help they can get. :)

Did you see that Lego announced this month that they are laying off 200 workers? Is this because those imaginative building games are being superseded by video games or devices with screens? When I told our kids this summer that I was banning fidget spinners, the 7.5 year old built one out of Legos. (He's apparently perfecting the model because he doesn't think it spins well enough.)

As a teacher of older kids, I see the imagination stymied as middle schoolers, and it's only worse for high schoolers. They are so afraid of being "wrong" or "not doing it right" that they freeze when given the opportunity to express their creativity. Perhaps we need to include safe spaces for that crazy, imaginative play as they grow too.

I did a writing exercise with my 8th grade class one time. I gave them a 1 sentence prompt (it was something spooky about three figures around a campfire). The class as a whole composed a story and I typed it as they went and displayed it on the overhead screen. Each class did this. At the end I printed them and handed them out.
This was a lower income area and I got the typical questions, like can there be violence, can someone die,can the story involve a gang. My rule was anything goes but everything you write must advance the plot.(We reviewed story structure and definitions beforehand).
The stories were amazing. Kids got 10 points for each contribution. And because they could speak instead of writing, students who struggle with writing were very vocal.
I was delighted with the results.
I was a substitute teacher for 7 years, often a long term SUB for a whole semester, so I may have had more leeway than the regular teacher.
Same classes, when it came time to start the massive Heroes Journey study, I kicked it off by bringing students into a dark classroom lit only by electric candles in the Windows. We talked about rituals that day. Of course they immediately thought "evil" but ended up identifying quite a few in their everyday life, such as church sacraments, quincinera (majority Hispanic population). We also watched Star Wars and id'd each part of the heroes journey.
I think the journey into imagination has to be participative, even guided, at first, because our kids are out of practice. But it comes back quickly, especially with visual and tactile prompting.

CJ, I think you're right about some who need encouragement/help to explore their creativity. Thanks for your comment.

Liz, I appreciate your input. I didn't know about the Lego layoff. Middle school is such an awful time for kids. They don't want to be different. I never thought about the fear of not doing something "right." But I can see that. A "safe place" to be creative sounds like a real need.

Sandy, what creative exercises! Thanks so much for sharing. The fact that they didn't have to write anything took out their fear and freed their imagination. Guiding their imagination helps those who never let it loose before and look how they soar. That's what I did in a small way with my grandkids. (You just can't take the teacher out of us.) BTW, that one sentence prompt? We did that as part of my writing chapter's program. Mine turned into a romantic suspense called One Red Shoe.

Agreed. It seems some adults just complain and don't try to encourage kids to do anything. Any kid will use their imagination if they feel the urge or drive to. More so when encouraged and given the opportunity to decide for themselves.

Thanks for the great post, Diane. I used to make up characters for my three children when I'd be flying solo as a parent. We spent many a lunch or dinner with me taking on the persona of a private detective, a fabulous chef, even an Egyptian "Mommy" replete with to towel wrapped head and sheet bound body. I had a ball entertaining them and they seemed to have survived my penchant for drama. One's a Lawyer, one received his doctorate in Computer Science from Notre Dame where he works and the youngest is a Telemetry Technician. Not a bad brood! Thanks for reminding me of the power of imagination and the fun of using it!

I always encouraged imaginative play with my guys who loved to play outside or build their own creations and worlds with Legos. When Grandguy comes over, we limit game and TV times to play games and Imagination is something that grows on you from that first tiny seed and those seeds need to be scattered freely. I'm thankful we didn't have a lot of TV stations and toys growing up so we had to invent our own play. Skills I still use today!!

Francesca, what wonderful experiences you shared with your children. I'm going to remember the detective game when I take the grandkids out for lunch. They'll have a blast.

Nancy, my daughter limits "screen" time with her kids, including time with me. LOL No playing on my phone or iPad (can you hear the groans?). Playing with Legos can be a great conversation starter. I remember those days of 4 TV channels. When it went to 6 (we got a Canadian station, too), we were thrilled. So, yes, that limited TV watching and we were "forced" to invent our own games.