On Punching Nazis and a Cover Reveal by Jane Kindred


My ancestors came from Sweden and the British Isles, so Vikings are in my blood. Perhaps that’s why I’ve always found them so fascinating. My hero in The Dragon’s Hunt, Leo Ström, is a Viking warrior lost in time. And as I discovered along with Leo, the gods of the Vikings suffer from an unfortunate association with certain deplorable groups in the modern age. I’ve recently begun to embrace my Norse heritage, and, like Leo, I don’t take kindly to having anyone pervert that heritage for their own racist agenda.

In a way, writing The Dragon’s Hunt was a way of reclaiming Norse symbolism. It was also a catharsis. The villain in Hunt is a bonafide Nazi from the Third Reich, a "Red Skull," if you will, who’s used magic to prolong his life. And he’s also obsessed with Norse mythology. Through Leo (and Rhea, the heroine), I got to experience the satisfaction of punching Nazis.

As it happens, my publisher surprised me with the finished cover art for Hunt just as the Nazis were marching on Charlottsville, where their violent ideology resulted in the murder of activist Heather Heyer. It’s too late to add an official dedication to The Dragon’s Hunt, but Heather, this one’s for you. 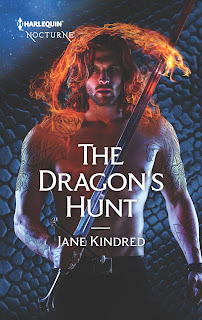 Awakening the dragon...
By day, Leo Ström works as an assistant in a tattoo parlor. By night… Well, he isn’t quite sure what happens at night. He just knows that it’s best if he restrains himself.

Ink is more than just superficial decoration to Rhea Carlisle. Her ability to read her clients’ souls in their tattoos gives her work its special magic—and it allows her to see that there’s more to Leo than his brilliant blue eyes.

The passion that kindles between them might be Leo’s salvation. Or it might be the end of the world…

Available for pre-order now from the following vendors:

Blood ran into his eyes as he struggled to his feet. The groans of the maimed and the dying around him were eclipsed by the battle cries of his comrades who remained, and by the crack of iron against leather and wood—and against flesh and bone. They never should have followed their enemy into the woods. They’d been set upon by forces they couldn’t count, swarming out from behind every tree and every rock like a band of brigands, surrounding them with no room to maneuver, no way to stand in shield formation. It quickly became every man for himself.

Through the blood and mud caking his vision, he caught sight of the sudden arc of a battle-axe swinging down on him from his left. He’d lost his shield, and he turned and parried with his sword, but he’d taken a fierce blow to his sword arm from the last man he’d killed, and he stumbled back under the force, pain radiating like fire through his arm to the shoulder. The next swing from his opponent’s axe he couldn’t evade, and the blade caught him under the ribs, hooking in the links of his hauberk. He prayed to the Allfather as he went down that he might take one more enemy with him as he died. Let him die an honorable death. The axe descended, and he summoned all his strength, thrusting his sword to meet the bastard’s gut as his enemy fell on him.

The blade should have split his skull. He thought he’d felt the blow. But he was blind as a newborn kitten in the muck and mud. And then he realized he must have gone deaf as well. Silence fell over him like an oncoming bank of fog, muting the clangs and cries, engulfing him in an utter lack of sensation. Perhaps he’d died. But this was no Valhalla. This was…nothing. Had Odin not chosen him after all? Could this be Fólkvangr, the field of the slain in Freyja’s domain? Or was he in cold and empty Helheim? Surely he’d not been consigned to the Shore of Corpses. He was no oath-breaker; and murder—it didn’t count in war.

A hand, cool and feminine, touched his forehead. Perhaps this was only the in-between place where warriors waited for the Valkyries to come for them. He tried to clasp the hand but found he couldn’t make his limbs work. A cool kiss now brushed his forehead.
“Beautiful one.” The whisper at his ear was a soothing breeze, quieting the fire in his veins with the beauty of its cadence. “You shall not die.”

Was he to go back out to the battle? He must be in the tent being tended by his father’s slave girl. He’d lost consciousness.

“Did I kill him?” His voice came out in not much more of a whisper than his benefactor’s, though much rougher. His throat still felt the fire that had eased from the rest of him. A fever, no doubt, had taken him. He’d lain delirious and was only now coming around. Yes, this made sense. “Did I send my foe to Hel?”

“You were victorious. And I have claimed you.”

Before he could ask her to repeat the odd phrase, a searing pain encircled his heart, not fire this time, but the burn of ice, accompanied by the sensation of pins and needles in the flesh of his forearms. He could neither move nor speak, and the pain was becoming intense.

“Hush, beautiful one. Now they cannot have you.”

“They?” He managed to croak out the single word, though his tongue felt like wool batting.

I agree with you about punching Nazis. Not that it would do much good. Nothing is going to change their minds about white supremacy. But if you get a sense of catharsis from writing about defeating them, that's great. Your new story sounds terrific. BTW, if you want to guest on my blog when it comes out, let me know.

Wow- what a fabulous cover!

Thanks, guys! I love the cover too. Leo is my favorite of the Carlisle sisters' beaux because he has more brawn than brains. Ha!

I can agree with punching Nazis. And some other bigots :)