A Strange Turn of Events

I've carried a small tablet used for jotting down storylines as long as I can remember. To say I'm an avid reader would also be spot-on. There are books in the trunk of my car, my kindle lives in my purse waiting for those few minutes of freedom when I turn it on and "flip" through titles or continue reading a story I started. Thing is, I frequently find myself reading more than one book at a time which is often the way I write.

I've always favored paranormal stories, particularly vampire/vampyre. Yes, the first few books I picked up they were vampYres! Years ago...many, many years ago, I started a story about vampyre cats who came about due to interference by an angel and prophet. Like many of my stories, they were often shoved to the back of a drawer, placed in a box under the bed, gosh, they were everywhere! Some still collect dust. There were also storylines involving the devil, shifters, and magical beings of every kind. The devil and sons in Hellacious, my dogs in Shepherd's Watch, hawks in Immortal Redeemers, all found the light of day in various stories which have been published at Changeling Press. Quite a few cats, even a wolf, growled onto the scene in novellas and continue to thrive at Changeling in the Extra Cream Series.

Which brings me to the title of my post.

Extra Cream Series
This series is a box set containing four novellas that introduced my vampyre big cats to readers. I stripped these books from the over 100k version of Reign of Blood which started out as my working title. The basic premise is these creatures evolved because an angel got bored in Heaven and decided to sit back and watch what would happen when he and a prophet allowed the cats to be infected with vamp blood. Neither expected the 'strange turn of events'. Nor did I when I decided to pull angels from the book because they clamored in my head for their own stories!

Archangels Series
So far Ramiel and Uriel (his tale will be republished by month's end) have had lives of their own. Soon Gabriel and the prophet, Ezekiel, both responsible for vampyre cats, will get a novella of their own. Michael, Lucifer--who secretly conjured a bloody being of his own named Phoenix (and, yes, he rose from ashes, can take the form of a cat or vampyre as well as having angelic tendencies--I've had a long running affair with this being!) There is Samael--the Grim Reaper, Raphael... They all appear in the first two books and still rattle around in my head looking for a place in my fictional universe. 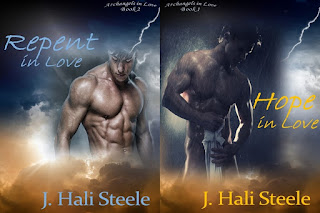 The Dilemma
Having received rights to a couple of these vamp books (Hard Case and Quench) and preparing to republish them, I've decided to bring them back together with their angelic creators. No easy feat. I'm reading each with an eye on timelines and other anomalies that could crop up. I never expected it to be this hard?! I've even felt at times, let it go and began with new things but I love these stories so I have chosen the tougher route. It does help that in the first books I made it very clear there are cats who wish to remain true to their species so they reside on compounds spending a majority of time in their furryness and don't have huge roles. Patrolled and protected by cats who embrace their vampyre brethren's abilities, who, by drinking human blood become much stronger and a force to be reckoned with as they walk in daylight; it's these guys I've previously written about who will need to be returned to the fold so to speak and slipped back into my world being mindful of their previous storylines while creating new stories. Wow, that was a mouthful that should probably be edited for punctuation or something! I remain confident I can bring them back together as I'm the one who tore them apart. If it were easy, I'd have given up on the craft of writing a long, long time ago.

A strange turn of events, indeed!

A serendipitous occasion. It's great that you're able to bring them back together. Best wishes.