Keeping Stereotypes out of my Books by Barbara Edwards

One of the hardest things about writing paranormal is the preconceptions of the audience. Everyone knows a vampire, a werewolf, a ghost or a dozen others. So what do you do if you want to include one in your story? Do you use the stereotype? Or do you try to find something different?
I know in Ancient Awakening, I wanted a terrible villain: a creature who sucked the life from his victims. That sent me skating too close to Dracula.
I had to really think about my villain. How to make him different?
I finally made him a true ancient, older than the vampire.

Ancient Awakening excerpt:
Josh Randall swallowed the bitter taste of fear. In Vietnam, he’d learned the first danger sign was often an unusual noise. He pressed his ear close to the cracked-open door.
“Quiet as a grave,” he mumbled.
“Relax. That’s good.” Wally belched loudly and scraped the last drops of stew from his cup with a folded slice of stolen bread. He dropped the cup next to his sleeping bag.
Wally and Butch’s rough laughter echoed eerily within the mausoleum’s marble walls. It had taken a minute to open the brass lock sealing the heavy double doors. Another to bring in the meager supplies they carried. A hundred years ago they’d been called tramps or hobos. Josh liked those terms better than homeless. He had a home although, at times, he wasn’t sure where.
At least he was with friends. Josh eased the heavy metal door open another inch and peered into the darkness. Dread twisted his innards. Without his pills, the shadows constantly threatened. The cold cubicle enclosing them sent paralyzing shivers over him. He huddled around his purple backpack. Everything he possessed was inside.
Smoke from the brightly burning fire in the center of the mausoleum made his eyes water. He blinked away the tears. The absence of tropical plants, mud and humidity didn’t fool him. He’d believed they were safe before, and his friends had been blown to smithereens.
A familiar hum was steadily growing inside his brain. He clamped his hands over his ears. When the noise continued, he wrapped his sleeping bag over his shoulders and squeezed his eyes tightly shut. Maybe if he crawled underneath the cover the sound would vanish. He concentrated on his friends’ voices.
“Man, it’s great to be out of the damn wind.” Butch’s cup clinked on the floor. “Time to head for Florida. Indian summer won’t last so we gotta hustle. We could stay a couple days, maybe make a few bucks.”
“Ain’t likely. New Englanders’ more likely to hand out clothes or food. Bunch o’ tight-fisted do-gooders, ‘specially here in Rhodes End. ‘Member last year? Them old biddies gave us new boots before the police moved us out.”
“Mean bastard, the chief. Don’t want to meet up with him again. Prob’ly the reason none of the other guys are around.”
“Ain’t just him,” Wally’s voice dropped as though he feared being overheard. “It’s this place. Something about Rhodes End causes an itch between my shoulder blades.”
“You’re an old woman.” Butch snorted loudly. “Worried the dead gonna grab ya? Nobody buried here, but I bet there’s something worth pawning. No reason to keep it locked otherwise.”
“I ain’t afraid of nothing,” Wally protested. His shoes scuffled on the polished marble tiles as he fumbled his way around the eerily lit space. A ceramic urn splintered on the floor with a loud crunch. He fished a small penlight from his pocket and used the pinpoint of light to examine the mess. “Worthless shit. Wouldn’t get fifty cents for it all.”
Josh cringed and peeked warily from the folds of his sleeping bag. The hum had changed to a soft slithering, like a snake on sand. Something stirred close by, something evil.
Wally pointed towards the faintly illuminated back corner.
“How about that? Mighty fancy carving on it.”
“If it was a little bigger, I’d figure it for a coffin.” Butch scratched his unwashed head while he squinted at the carved stone rectangle. “With gold rings or teeth on the body.”
“Lem’me see.” Wally shined his small flashlight so the beam revealed the writhing figures.
“Piece of shit.” Butch pushed at the box. Stone grated on stone. “Too heavy to lift. Help me get the lid off.”
“No,” Josh whimpered. Evil. He smelled evil. He couldn’t tear his terrified gaze from his friends. He tasted it.
“Watch out!”
The box crashed heavily to the floor.
“Damn it, ya broke the friggin’ side. Be worth spit now.”
“Quit yer whinin’. At least you’re not bleeding. Damn edge cut my hand. Shine a light here while I check inside. Better be worth our trouble.”
Bloodcurdling shrieks tore open the night.
Battle-ready, Josh threw aside his covers. Where the hell was his rifle? His fingers tore over the smooth marble. Butch let out a screech and stamped over him before clawing his way outside. The night swallowed him.
Twisting shadows battled across the walls. Josh scrambled to find his rifle, kill the enemy, defend his squad.
Wally swore hoarsely, his voice breaking over vile words. Tumbling outside, Josh found grass and dirt under his hands, but no gun.
He didn’t recognize the next scream as Wally’s, but it couldn’t be anyone else.
Bile choked him. He couldn’t help. He had to escape.
Josh ran. 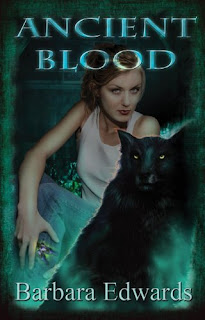 Then I stumbled into werewolves. There are thousands of stories about all kinds of werewolves. Lovers, killers and everything in between. It’s fun to be different. In Ancient Blood, I built an entire clan of werewolves. It was a matter of writing my own rules for what they are. I based it on research into real wolves and their behavior. Even so, I need to keep details in a diary to make sure I remember.

Blurb Ancient Curse: Evil never dies; and for psychic Rainie Gamble who accepts a job to weed out evil artifacts, this could not be more true. When she arrives at the home of Thomas Broquette, her new boss, she isn’t sure what to expect. But the handsome and intriguing Thomas is only the tip of the paranormal activity she encounters while going through his library.
After several near misses when Rainie is injured by evil forces, she wonders if her new boss is hiding a secret? What does t he previous owner Mason have to do with the threads of doom encasing the estate? And why does Thomas bring her father, a well-known art thief, into their midst.
The attraction she feels for Thomas grows, as does the evil winning its battle against the inhabitants of what could be her new home. Rainie wonders if she will find and defeat the inhuman force causing all their problems before she and Thomas are sucked into its evil forever.

So after Ancient Curse, what is my next challenge?
I’m going back to the first Jacob Rhodes and why he came to this land. I hope to finish it shortly since I’ve been short-circuited by real life. It’s nice to be back in my fictional world.

Posted by Barbara Edwards at 1:00 AM

Barbara Edwards
I’m Barbara Edwards and a native New Englander. I’m a graduate of the University of Hartford with a Master’s degree in Public Administration. I write poetry for myself and novels when I need to tell a longer tale. I’m fascinated by the past so naturally turned to writing historical romance. The dark paranormal stories evolve from nightmares. The romance comes from my belief in people’s basic goodness and longing for love.

Great post! I love to create 'unique' villains, but then face the challenge of explaining the concept to my audience who is expecting the stereotypical one.

Unique characters are difficult to accomplish. So much has been written about vampires and werewolves that it must be difficult to put your own imprint on the story. I think the most important thing is to be consistent with the world you've built. Establish the rules of that world and stick to them. Best wishes, Barbara.

I just love it when I find characters that defy all stereotypes, complete with their own twists and unique traits. It makes an old spin interesting!