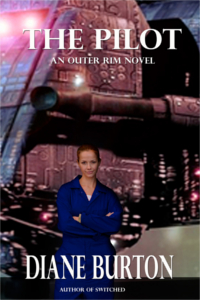 In my science fiction romance, The Pilot (An Outer Rime Novel), a medi-healer is used to cure the hero’s infection. In my world, the handheld device is too expensive for a cargo pilot (the heroine) to own. But her brother, who works for a galactic gangster, has one. He waved the device over the patient. It diagnosed and cured. A medi-healer would’ve come in handy for me two weeks ago.

This has been a bad winter health-wise for many people. Influenza that the flu shots didn’t prevent. People in hospitals, even dying. I counted my self lucky that when Hubs and other members of the family got sick I didn’t. My luck ran out right before Easter. I woke up coughing. Okay, a cold finally hit. So I thought. If I’d had a handy-dandy medical tricorder, like Star Trek’s Doctor McCoy, it would’ve told me I had pneumonia. In a scenario from The Pilot, a medi-healer would’ve diagnosed then cured. All with a wave of the device. No going to Urgent Care, no x-rays, no courses of antibiotics—one to cure pneumonia and a second course to take care of a subsequent sinus/ear infection.


That got me thinking about what else would the future hold in the medical field. In The Pilot, my character used a hover board to carry a patient to the medical center. It rises above the ground on a steady stream of air and is guided by one person. Remember the scene in Star Wars V: The Empire Strikes Back when Han, encased in carbonite, is guided to the bounty hunter’s ship?


Creating a cyborg isn’t the future. It’s here now. Artificial joints are common. I have two titanium knees, and I know people who’ve had hip and shoulder replacements. Mechanical hands that function like real ones by being connected to the brain. The “Six Million Dollar Man” was fantasy back in 1974. Today, the severely injured can now be “rebuilt” with artificial arms and legs.


In Greta van der Rol’s Iron Admiral series, humans are fitted with neuro implants that allow them to speak without words. They can access data ports using their implants, no typing necessary, and store the info until it can be downloaded. Fiction? As his ALS (aka Lou Gehrig’s disease) advanced, Stephen Hawking, the physicist and cosmologist who just passed away, was unable to speak. Using a speech-generating device (SGD), he was able to communicate using a single cheek muscle. SGDs are used by many people for whom speech is impossible or difficult.

What else is coming in the medical field? Organ transplanting isn’t new. Creating an organ, like a kidney, using a 3-D printer is a real possibility. Curing diseases using a cell instead of a pill. Surgery using ultrasound instead of a knife. A vaccine patch instead of an injections. Robots doing surgery.

Nanobots, microscopic machines, could carry medicine to certain parts of the body to heal diseased parts or destroy (cancer cells) on a molecular level. In science fiction, nanobots are commonly used. Yet the thought of tiny robots running around through my blood stream is kind of creepy. If nanobots could destroy cancer cells without the debilitating effects of chemotherapy and/or radiation, I’d take the nanobots.

What other fantastical medical advances are possible?

Sparks fly around the Outer Rim when rule-bound Administrator Trevarr Jovano clashes with free-spirited space pilot Celara d'Enfaden. She must deliver her cargo or lose her ship to a loanshark. Having lost her last shipment to pirates masquerading as Coalition Inspectors, Celara refuses to be duped again. Determined to make an example of those who flaunt the law, Trevarr seizes her ship. Yet, they must work together to rescue her brother and find his wife's murderer.

Diane, first let me say, sorry you had been so ill. I was one of those three weeks of misery AFTER the flu shot people! I loved the wonderful medical apparatus you speak about, the medi-healer. Like waving a wand and fixing a broken chair. Your story sounds enticing and sure to excite the imagination as we all await the time when the next Steven Hawking can speak to the universe.

Glad you are on the mend and can enjoy the rest of the spring. As Isaac Asimov famously said, "Today's science fiction will become tomorrow's science fact." I'm still waiting for my flying car, but I do have a communicator a la Star Trek! Diseases that once killed masses are now treatable or non-existent. And it's science fiction writers like you who imagine the future and inspire others to make it reality.

Thanks, Francesca. I'm sorry you went through so much misery with the flu. Awful. Magical healing with the wave of a wand. I like that!

Thanks, Sorchia. I'm feeling so much better. Isn't it amazing how much what was once sci-fi is now real? I have my communicator, too. :) I read that many NASA scientists got into the field because they watched Star Trek and other sci-fi TV/movies. If we can imagine it, someone will devise it.

So glad you are feeling better!

WOW. What a thought that we might have more convenience and advances with technology. It boggles my mind. However, I do refuse to become "Jane Jetson". I will cook all my meals and I won't have a robot. However, I sure don't mind reading books with all that stuff!!!! Glad you're feeling better!

Hi Diane. This was such an interesting post. Which is why I don't write sci-fi - all that world building. But I guess no matter what we write, we create a world for our characters, nonetheless.

So sorry to hear you and your family was hit by the flu. It's flu injection time here in Brisbane and there's even a deadly flu named after the city. It's supposed to be a bad one.

All the best with your release!

Discussed yesterday in my writers' group: SCI-FI romance and how popular it is. Advised to use as key words for genre searches. You are right on!
Good luck!

I had no idea you were so sick, Diane! I've had pneumonia several times, and it is no picnic. I'm so glad you're feeling better now. Loved your post. Just thinking about what wasn't possible even 20 years ago does make you wonder what's in store 20 years from now.

Maureen and Marissa, thanks. As I researched this blog, I was amazed at all the medical advances that we don't even know about.

Kara, LOL. I love conveniences. A robot to make dinner? Where can I get one? Another robot to weed (and not pull out my plants)? I'd love it. Reading about future technology makes me enthusiastic about the future.

Denise, thanks. I hope you and your family stay safe. There were so many strains of influenza here in the States that even if you got the flu shot it probably didn't help.

Susan, for so many years sci-fi romance was called futuristic or futuristic romance. Not exactly what we write. I love the term science fiction romance. So much better. Women (generally) want relationship stories. Men like facts. Regular science fiction isn't satisfying to me. I want to read about characters who grow and change through a well-told story that takes place in the future. I think there are a lot of us who do.

Leah, thanks so much. I wasn't online for almost two weeks. Didn't feel like reading email or Facebook. I'm sure you know how that feels. If there is a next time, I'm getting to the doctor right away--esp. since I don't have a medical tricorder to tell me what's wrong. :)

Oh my, there is so much ick going around this year! and it seems to linger forever, too. Sorry it found you. I hope you have now had your share for the year. Great idea...and I too think nanos running around inside me are creepy!