I love animal shifter legends and one that caught my attention when researching for “Dance to a Wylder Beat” was the legend of the Ephraim shifters. When Lewis and Clark began their exploration of the western United States, they were surprised to find it teeming with giant bears. It is estimated, in Lewis and Clark’s time, there were over 50,000 grizzly bears and many (now extinct) species of giant black bears in their path. (Interagency Grizzly Bear Committee) Any bear on his hind legs taller than a human man was given the name “Ephraim” and known as a danger to herds, crops, and humans.

As towns sprung up along the east-west railway line, these bears grew in reputation. The original Ephraim legend (as far as I could trace) comes from an 1811 pamphlet detailing the banishment of a man to the mountains from his town. The fur trader was a swindler, a thief, and subsequently forced to winter in the mountains. When he was found by hunters the following spring, he was more bear than man. It was said he “shifted (changed) into an Ephraim”. The nomadic fur-trading mountain men were common in the wild west. Many of them lived off the land after being ousted from towns. They were called “mountain men” but the least civilized were given the designation of “Ephraim”. 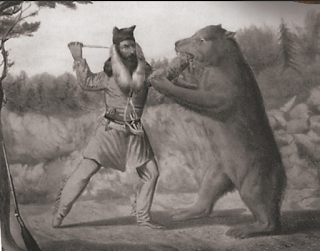 Could I use this term in my romance set in 1878? Short answer is yes. I came across the legend of “Old Ephraim” who was a giant grizzly bear who seemed to possess human-like intelligence. Old Ephraim was a nine-foot eleven-inch bear who ate flocks of sheep like bags of potato chips. He had distinctive tracks because one of his paws had three toes. (University of Utah). He harassed the farmers of Utah for 92 years until his death in 1923. However, his legend lived on for decades when P.T. Barnum named his oversized bear “Old Ephraim” in his traveling circus. (Legends of Old Ephraim)

Photo of Old Ephraim Monument in UT, taken by Mystery of Utah History. 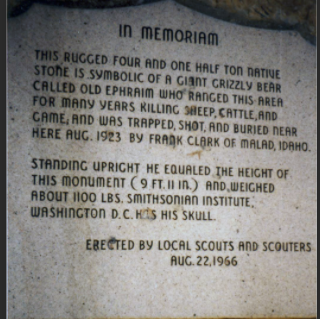 As a paranormal romance author, I couldn’t resist resurrecting the Ephraim legend. What if one of these mountain men had a feral family with feral children? If they continued with their wild existence, they would adapt to become more and more like bears. What if one of these children got separated from the group and had to fend for him/herself? An Ephraim child wouldn’t have the option of the foster system in the wild west. Who would be connected enough to nature with a sense of community that overrides their suspicion of the paranormal to take care of such a child? Roaming the wilderness would nurture them into a feral adult, right?

These questions became the backstory for Olive Muegge in my upcoming release “Dance to a Wylder Beat”. She relocates to the civilized town of Wylder (1878 Wyoming Territory) at the request of a cryptic telegraph ad. It was written by Nartan Sagebrush who lives on the edge of Wylder as a leather tanner with his brother, Ikshu. Nartan longs for the community he had as part of the Arapaho tribe before they moved onto the reservation in 1874 without him. He asks his spirit guides for help to assimilate into the settler social circles of Wylder. When Olive arrives, Nartan wonders if his request was misinterpreted or if his guides have decided to mess with him…again.  Will Olive destroy Nartan’s life like a true Ephraim or find a place in the Wylder community for his family? Find out in Dance to a Wylder Beat in the spring of 2021 from The Wild Rose Press…here’s an exclusive first look at the back of the book blurb! 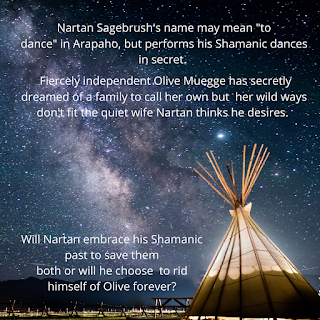 I adore PNR books that build of actual legends and this is one I've never heard before. Way to do your homework, Marilyn, and spin it into an intriguing tale.

Thank you so much! I'm intrigued by the commonality of shifter legends across cultures. It's fascinating!

I never heard this legend, either. Fascinating. You did great research. How wonderful to use this in your story.

Thank you Diane. I thought I had read all the bear shifter legends so I was thrilled to find it.

The legend is so cool!

I love hearing about your research - and this is new to me, and fascinating! Definitely fodder for a great story!

I love the giant bear outsmarting the pioneers.🤣

Thank you. I tend to dive down rabbit holes not regularly traveled, lol.

Sounds wonderful and right up my reading alley. Loved your post.

I know so little about bear shifters and bears, I learned a lot from your post, Marilyn. Thanks. I'm going to take at a peek at your books. I like the Old West as a setting, too.