A Fenian Warrior by Mary Morgan

As I stated in my February post, I have this fascination with Celtic mythology, specifically the Tuatha Dé Danann. They are known as the Shining Ones, Sidhe (Shee), or the Fae. When I first created my Fae warriors, I sought to give them the name of Fenian.

Here is the definition of Fenian from Merriam Webster:

1. A member of a legendary band of warriors defending Ireland in the second and third centuries (A.D.).

2. A member of a secret 19th century Irish and Irish American organization dedicated to the overthrow of British rule in Ireland.

Obviously, I went with the first definition. To expand more, the Fenian name derives from the Fianna Eireann, the legendary band of Irish warriors led by the fictional Finn MacCumhaill (MacCool).

In my stories, a Fenian warrior is part of a group called the Brotherhood. They’re elite warriors within the Fae world who safeguard the realm between Fae and human. These warriors have the power to travel through time called, the Veil of Ages. They are often summoned by the Fae council to restore balance in the mortal world, or to aid humans in need of assistance.

There’s only one actor I’ve envisioned for Conn in Quest of a Warrior, and that’s Alexander Skarsgard. From the moment Conn stepped forth in my first book, Dragon Knight’s Sword, I saw this actor. It’s the way Alexander walks into a room—commanding and fierce. A true warrior. 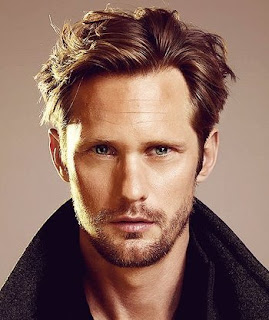 Here’s a preview from Quest of a Warrior, Legends of the Fenian Warriors, Book 1 ~

"You met them in the Order of the Dragon Knights. Now, journey to the realm of the Fae and witness their legends!"

Fenian Warrior, Conn MacRoich has traveled the earth for thousands of years, guarding the realm between mortal and Fae. His deeds are legendary. Yet one mistake will force him on a journey to fix a broken timeline. On Conn’s quest, he must face a human female who will eventually bring this ancient warrior to his knees.

When Ivy O’Callaghan inherits her uncle’s estate, she never imagines there will be more secrets to unravel, including the one she hides from the world. With the help of a mysterious stranger, she learns to trust and step out of the shadows. However, nothing prepares Ivy when she learns Conn's true identity.

As the loom of fate weaves a thread around the lovers from two different worlds, will the sacrifices they make lead them to love? Or will their secrets destroy and separate them forever? 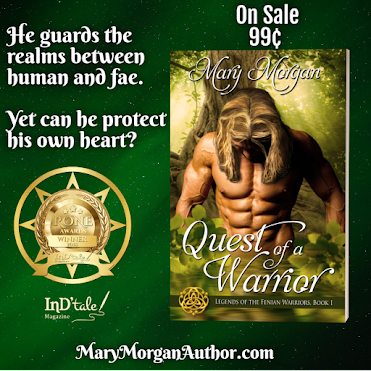 this sounds goooood! Especially since I'm finally heading for Ireland in the fall. On my Kindle!

How wonderful, Nancy! It's so nice to hear someone is planning a trip! Even though it's been years since my visit to Ireland, the land continues to haunts me (in a good way). It was a magical adventure and one I'll never forget.

And thank you!!! I hope you enjoy Conn and Ivy's story.

And I'm sorry for not mentioning this in my post. The sale starts this Friday 3/12. Hanging head in shame...

My grandmother was very proud of her Irish heritage and I remember stories about fairies and leprechauns. I even made up stories. I need to hear more about the irish legends. Do I need to read order of the Dragon knights first?

Great post, Mary! You know I write about the Tuatha De Danann too, so they're near and dear to my heart. Wishing you continued success with this series and your others!

I enjoyed this book. Great story from a great story teller. Please excuse my absents from blogs and twitter. I can't see to shake this COVID, it keeps coming back to the point I have no energy.

I love hearing the story that led up to the story.

Besides being a good post, you offered us a picture of the handsomest man in the world - Alexander Skarsgard. My heart melts when I see that man. I wish I could post a gif in the comment. I have a great gif of him removing his shirt. :-) Congrats on the Rone.

Well imagine my delight! I can edit the post after it's published! Woohoooooo! Included the bit about the sale dates.

Donna ~ You can start with the Order of the Dragon Knights series to get a sense of the entire back story of the Fenian Warriors, but it's perfectly fine to start with Quest of a Warrior. In this series, I take you deeper into the mystical realm of the Fae.

Judith ~ I LOVE your Guardians of Erin series!!! Epic!

Tena ~ Aw, thank you! Please take care of yourself! xo

Maureen ~ I think I've been dreaming of Fae warriors since my trip to Ireland many years ago.

Thank you all so much for stopping by! xo

It's always great when you find someone who is the perfect inspiration for the characters in your story! Sounds great!

Thanks, Jessica! There have only been two actors who reminded me (and were a great source of inspiration) of my characters. All the others were ones I created and visualized within my mind.