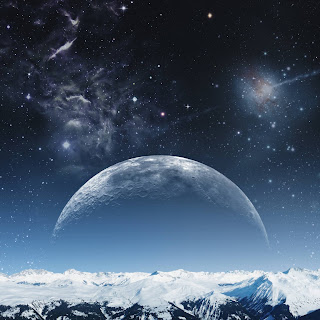 ALTERNATE UNIVERSES
IN
PARANORMAL AND SCI-FI ROMANCE
As an author of both sci-fi and paranormal romance, I know we have to create alternate worlds for our stories. Because as much as we like to believe that aliens, shifters, ghosts, vampires, zombies, etc. exist on this planet, we don't see them walking around in public on a daily basis. So, we create our own where they do.
Now, these alternate worlds or universes can be as similar or different from our own existence as we want them to be. In my ALIEN NEXT DOOR series, aliens live on an Earth much like our own. And they try to blend in to human society so their secret is not discovered. The world-building was simple, as I only had to tweak a few things from our own world.

In my most recently published series, SHIFTER TOWERS, shifters live amongst humans in an omegaverse. There was a little more world-building involved with this series. As similar as I tried to make this world to our own, I did create new cities, towns, and landmarks to match the world I was writing in. And since the characters were mostly AOB shifters, there were a few other differences I had to consider. Like how often, and where they were allowed to shift.
With my GALACTIC DEFENDERS series and my upcoming KADDIM BROTHERS series, I went all out, creating new worlds with new rules, and so much more. And the joy of these stories taking place on multiple planets and on space craft as well is that each one is different from the other, leading to so many possibilities for things to happen. 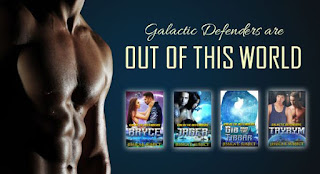 As a reader, or an author, I want to know how close you like your stories to be to your reality? Do you like to wonder if your neighbor might be an alien or a vampire? Or, do you want the full escape to leave this world during your reading/writing time? I enjoy both, but I'm always curious about what everyone else thinks.
Here's a snippet from BRYCE, the first book in my Galactic Defenders series, where Lalia is on the Galactic Defenders ship and trying to find her way around...

Glancing one last time at her daughter, she pulled on her robe then exited the room.

Confident of their safety on the carrier and in space, the Galactic Alliance hadn’t assigned them any security. They’d been housed in the guest quarters, three floors up from Bryce and the rest of the Defenders.

No one patrolled the hallway at all, making her passage past the communal bathroom and  to the lift easy. “Second floor, Defender’s Lounge,” she recited to the computer after the doors slid closed behind her. The chamber softly glowed around her, no buttons or emergency phones on the walls like elevators on Earth. While Bryce had told her to locate him in the lounge if she had an emergency, she doubted he’d expect her so soon after he’d left her. But she couldn’t share her objections in front of her daughter. If they did end up on Hemera, she didn’t want Katrina to know how much she’d detested life on her home planet.

“Destination reached,” the computer said in a neutral tone, neither male nor female.

Peeking out, she spotted no one. With all the Defenders she’d met on board, she’d expected to run into at least one of them. Instead, closed doors surrounded the gleaming floor of the large, circular room. Tables, chairs, couches, and other odd-shaped furniture rested along the far wall, as if pushed there before one of the crew had cleaned the floor.

Would she leave marks on the polished surface if she stepped across it, evidence of her visit to Bryce? Or, worse, set off an intruder alarm?

The lift door whooshed toward her. Lalia jumped out of the way to avoid getting squished. She paused, waiting for an ear-piercing wail, for all the Defenders to come rushing out to see what had set off the alarm. Yet, an eerie silence hung around her, all the doors remaining closed.

She tiptoed around the edge of the room, searching the entrances for some marker indicating which one led to Bryce. Nothing. They all looked the same, brushed metal without even a window to help her find him. No number or any sort of identification to tell them apart from each other. How did any of the Defenders find their own room?

Like you, I enjoy similar (to our own) worlds, but more so the really different. I love to make up my own worlds with their own rules, governance, etc. It's fun! I've enjoyed reading snippets (on Weekend Writing Warriors) from your Tower series.

As with Jean's previous post, your worlds are so much fun and such a delight because you bring the reader in through the characters and let their world be seen through their eyes in a way the reader can relate to.

I love envisioning, reading and writing that everyday folk are really something more. (watch out neighbors! lol) I'm always impressed with authors who can build alternate worlds.

I enjoy creating entire universes with their own rules and regulations. I did so in my vampire series, but I also like setting the fantastic in normal worlds. As a reader, I enjoy both scenarios, although I guess I do like the created worlds a bit better since I know how much goes into it.

I love that with paranormal/scifi we get to choose. Build a world into our own or build one from scratch. But either way we get to use our imaginations and anything goes!

I love to keep the world as close to real as possible, with just enough magic or otherworldliness to make one wonder: If I turn around fast enough, will I catch sight of the ghost or monster or whatever? I like to think that magic is at our fingertips and we just need to figure out how to access it.

Diane ~ creating our own worlds is really fun, for sure! It's remembering all the details we create that is the hard part. Thanks so much!

Nancy ~ Thank you so much! Yes, I try to let the reader see the world as the characters see it.

Maureen ~ LOL Yes! Though I don't really side-eye my neighbors. It's the people who travel through my neighborhood, whether regularly or not, that I often wonder about.

Linda ~ Yes, I think we as authors know just what goes into writing. But both are definitely fun!

Abigail ~ Yes, those options are the best part. Gives us that many more options when writing.

Julie ~ There are so many things in this world that we don't yet know about. That could very well be one of them. One never knows.

I love creating my own worlds, Jessica! And who's to say that aliens from other worlds don't co-mingle with us, right? I still tend to argue about vampires with my sisters. Especially, when we used to watch the soap 'Dark Shadows'. So enjoyed your post!

I like to wonder if paranormal creatures walk among us and we don't even know. That's kinda the way I structure my Paranormal Romance/Mystery novels. A few tweaks to earth as we know it and off I go. LOL

Mary ~ Very true! We may never know. Oh, I remember watching Dark Shadows with my mom. Such a great show!

Tena ~ Yes, that's a great way to write a story. Definitely makes the reader wonder if it could be a possibility.

When you find that you have lost your way, that there is no way out for you, know that your strength must be in the Lord. He will sustain you, He will lead you to green pastures 💖