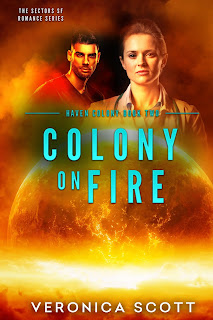 After writing the first book, COLONY UNDER SIEGE with these characters – Dr. Saffia Mandell, newly minted doctor working off her medical school bills by doing five years of government service on a remote colony and Micah Navonn, Chief Ranger of his people, who own the planet – I just really wasn’t ready to walk away from them. More plots kept coming to mind and I like these two and their world a lot.

The book is set in my Sectors scifi universe.

It’s a first for me to write a series which focuses on the same hero and heroine in all the books. I have other series but they feature a new couple each time. I’m enjoying the challenge and with Saffia and Micah it feels natural to me to follow their lives through the succeeding years. Lots of adventures to be had on a colony planet!

I’ve always been fascinated by disasters and I've written many a scifi disaster novel. I hope with a title like COLONY ON FIRE it’s not a spoiler to reveal there’s a major wildfire in the plot. I’ve lived in Southern California since I was 19 and had my own brushfire experiences. Nothing like what my characters go through in the novel, nor what many have suffered in real life, but enough to be able to extrapolate. I think my worst was being on my way to work one morning and becoming trapped on the freeway by a fire which had jumped the road…and I was next to a gasoline truck! (Yeah, if I put that in a novel people would scoff but true story.) The CHP eventually led us to safety. Looking back, I think it’s lucky we all made it without someone getting stuck. There were about ten cars.

I’ve always been especially terrified of being stuck in my car with the fire approaching and having to flee on foot…because the fires move incredibly fast, especially if wind driven.

And I do maintain a prioritized list of what to grab if we’re evacuating for a fire, prioritizing in order of how much time we have to get out, from basically none to half an hour. There are always so many sad stories of people who took things which were replaceable or just the closest items – it’s very VERY hard to think clearly in a crisis like a rapidly spreading wildfire and limited escape routes. We have a teaspoon which has been in the family over 200 years and it’s not melting on my watch, so that’s right at the top of the list, after humans and the cats.

There are other elements in the book than the wildfire, and of course the main theme is the relationship between the hero and heroine. The book can be read as a standalone.

When she came to Haven Two Dr. Saffia Mandell expected to grimly do her five years of medical service as the colony’s only doctor, work off her medical school debt and leave. Then she’d fallen in love, handled an epidemic and become an accepted member of the community. Now, in her second year, she faces new challenges as the tinder dry planet heads into a fire season and a mysterious food allergy threatens the local restaurant’s reputation.

Chief Ranger Micah Navonn of the Calinurra never expected to fall in love with a human woman but Saffia was a special person who captured his heart and now means everything to him. Not all of his people are as enthusiastic about the situation and his efforts to handle the politics are getting complicated. Add to that an infestation by insects from another world, causing portions of the forest to die off and his plate is full.

When the jet stream shifts course and the fires rage, will the colonists and the Calinurra set aside their differences? With Saffia’s life hanging in the balance, can Micah arrive in time to save her and the colonists in jeopardy?

And a quick excerpt:

“We’ve got to get to town right away. Can you open your mobile clinic a day early?”

“Of course if there’s a need. What’s wrong?” Saffia followed Ellen to toward the parking lot at a jog, Roann on her heels.

“Two of the boys got burned, not sure how bad. The wind shifted and they couldn’t move fast enough. The crew is bringing them to town now. Smoke inhalation problem too. Good thing you’re here, doc.”

“We won’t open up the entire mobile clinic,” Saffia said to Roann while she mentally reviewed what supplies she had for treating burns. “Unless there’s more to these injuries. The examining room should be adequate.”

“Yes, doctor.” Roann leaned forward. “What does the town do when you aren’t here?”

“We have a physician’s assistant and a couple of former medics,” Ellen said, keeping her attention on the narrow road. “But for anything serious the patient has to be flown to the main colony.”

“I’m glad I’m here to help today,” Saffia said. She got out her handheld and sent Warby, her medical AI a quick message. True to his prediction, he’d managed to create a version of himself to add to Gretchen’s systems. While the version didn’t have all of his enhanced capabilities, it could perform quite a few tasks and multiply her efforts and that of her staff, which in this case was only Roann.

She arrived at the landing field before the injured men were brought in, although as she hastened to Gretchen, Saffia could hear sirens coming closer. As soon as the mobile clinic opened, she rushed inside to throw on a medical coat and run herself through the decontam ray so she could begin examination and treatments immediately.

She and Roann worked together smoothly to take the most severely injured man into deep treatment for his lungs and burns, which fortunately weren’t as severe as Saffia had been dreading. The second man was stoic about waiting his turn and Warby was able to begin the lung therapy to some extent, once Roann had the patient properly situated on the exam table in the second small room. It was an hour of intense work before Saffia was able to step outside of Gretchen’s portal and announce to the waiting crowd both men were going to be okay and able to go home that same evening. A cheer went up from the surprisingly large group of villagers and she escaped inside to supervise the last few aspects of the procedures.

“I want to see both of you tomorrow,” she said to the men. “Have someone in your family work with Ellen to schedule an appointment but you must be seen. Those burns were nothing to take lightly and neither is the condition of your lungs. In the bad old days, you might not have survived the pulmonary damage.”

“We’ll be here, doc,” said the elder, a man named Baxter, who ran one of the local stores when he wasn’t fighting fires as a volunteer. “We’re sure blessed you were here today.”

“Can I attend the party this evening?” asked the younger, Duncan, with a shy glance at Roann, standing beside Saffia. “It’s supposed to be quite a special event, all my friends are going. Live music and everything. Be a shame to miss it—we don’t get much excitement up here.”

“Sorry, doctor’s orders you need to stay home and rest.” She was a bit annoyed she even had to say this but at least he’d asked. She probably would have gone supernova if she learned later he’d taken the risk of attending the gathering. “I know it’s hard to miss a good party and we should celebrate the lucky escape you both have had today, but these types of injuries are nothing to fool around with. You’ll be in for the long flight to the colony if you don’t heal and a lot more unpleasant treatments.” Duncan had struggled with the lung flushing and had required a medinject to partially sedate him in fact so she figured it was an effective threat.

Roann escorted the two men from the clinic and Saffia headed for her tiny office to make proper notes about the cases. She heard a muted cheer go up and smiled. It had been a satisfying ‘save’. This is what I got into medicine to do.

“You look satisfied with yourself.” Micah leaned against the door frame. “Thought you weren’t treating people today?”

“There was an emergency; couple of the firefighters were burned. Not too badly thank goodness, but I also had to treat substantial lung damage.” She rose and went to him, putting her arms around him in a tight hug. “When you go out to a wildfire, are you running the same risks?”

“Fire doesn’t treat anyone better than the next person,” Micah said, holding her close. “But as I’ve told you before, the Calinurra take a different approach to managing the blazes. I’m not usually a frontline responder anyway—we have trained crews for that.” He smoothed her hair away from her face and gave her a long kiss. “I promise you I’m always careful. Even more so, now I have you to come home to.” 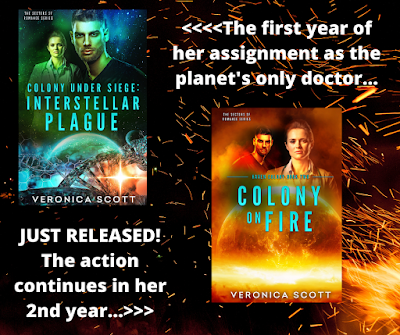 Posted by Veronica Scott at 3:00 AM

I love this article, Veronica. My family and I suffered through the Valley Fire in northern California in 2015. Will flames all around (even the telephone poles!) we evacuate and had to stay out for over a week. Thankfully, our home and possessions were spared, even though several houses around us didn't.

I'm excited to read about this newest series of yours! Thanks for letting us know how it all came about. Can't wait to read Saffia and Micha's adventures.

I'm so glad you hear you and your family were able to evacuate okay and the house didn't burn! We all always have to stay so vigilant here in California for sure...I hope you'll enjoy the book and that it doesn't trigger any bad memories. HUG!

Thank you so much to Paranormal Romantics for having me back as a guest. I always enjoy a visit to this terrific and varied blog.

Great post and so fun to stay with the character and watch their growth. That is so scary about the wildfires. That's not something I've ever had to deal with on the east coast. Your experience and the gasoline truck- wow- thank goodness everyone stayed safe.

Welcome back, Veronica. I really enjoyed this story as well as the first one in the series. Firs are so scary. I’m glad we don’t have to worry about major fires around here. Now tornadoes are another story.

I love these books! The otherworldliness (is that a word?) is established so effortlessly I'm pulled right in as a reader on the strength of the characters and the reality of their problems/desires.