Summer Solstice is June 21, 2021 in the Western Hemisphere. The solstice is usually celebrated by numerous cultures around the world. Thousands of people including druids and pagans annually celebrate the Summer Solstice at Stonehenge in Wiltshire, England. But with the coronavirus preventing large gatherings, last year and again this year English Heritage Facebook page will stream sunrise and sunset ceremonies live. Isn’t that exciting?

Another celebration that takes place around the Summer Solstice is Midsummer day is between June 21st and June 24th. Historically, this day marks the midpoint of the growing season, halfway between planting and harvest. It is traditionally known as one of four “quarter days” in some cultures. Folks celebrated by feasting, dancing, singing, and preparing for the hot summer days ahead.

The eve prior is called Midsummer’s Eve, marking the shortest night of the year. A common way to celebrate is to have a bonfire party! After all, these northern people have emerged from some long, dark winters! In the Austrian state of Tyrol, torches and bonfires are lit up on mountainsides, which is a stunningly beautiful sight.

Pagans referred to the Midsummer moon as "Honey Moon" for the mead made from fermented honey that was part of wedding ceremonies performed at the Summer Solstice. 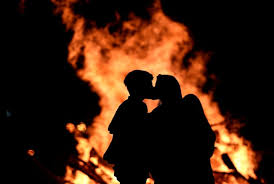 Ancient Pagans celebrated Midsummer with bonfires when couples would leap through the flames for good luck. (in the belief that the higher the jump, the higher your summer crops would grow.) Sounds a bit tricky to me. How about you?

Bonfires also were associated with magic. It was believed that bonfires could help banish demons and evil spirits and lead maidens to their future husbands. Magic thought to be strongest during the Summer Solstice.

According to ancient Latvian legend, Midsummer’s Eve (St. John’s Eve) on June 23 is spent awake by the glow of a bonfire and in pursuit of a magical fern flower—said to bring good luck—before cleansing one’s face in the morning dew.

In ancient times, Midsummer as a time of magic, when evil spirits were said to appear. To thwart them, Pagans often wore protective garlands of herbs and flowers. One of the most powerful of them was a plant by the name of 'chase-devil', known today as St. John's Wort used by modern herbalists as a mood stabilizer.

Do you like Strawberries?  I love ‘em. There are many people—like the Swedes—who celebrate the beginning of summer by eating the first strawberries of the season. Indulging in some strawberries and cream is the perfect way to celebrate the June solstice, since June’s full Moon is also known as the Strawberry Moon. It typically coincided with the ripening of strawberries in what is now the northeastern and midwestern United States. In fact, in many states, this is the perfect time to go strawberry picking! Look up pick-your-own-strawberry farms in your area!

Look at us learn things. I hope you enjoyed the fun facts & magic surrounding the Summer Solstice and MidSummer. 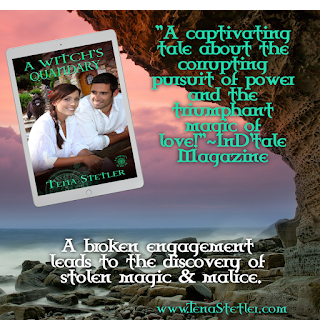 Speaking of bonfires and couples.  Let me tell you a little about an explosive couple in my upcoming release A Witch's Quandary, sixth book in A Demon's Witch Series.  All books can be read as standalones.

A Broken Engagement leads to the discovery of stolen magic and malice. Can they weather the storm and find a future together?

Gale's engagement is off because she refuses to leave her thriving business in Ireland to follow Dillon to Scotland. Her family and friends are on the emerald isle. Yet, when Dillon returns with the whole story and asks for her help, she must follow her heart.

Becoming a Solicitor, then partner in the family law firm was never Dillon's dream. Now it's his nightmare. Called to Scotland, his father demands he take his rightful place in the firm or be disowned and disinherited. Something is terribly amiss in the firm and family.

During Gale and Dillon's investigation, they discover the enforcer for the Demon Overlord is also delving into rumors the firm is acting illegally. Magic has been stolen, someone is being blackmailed, and a member of the Witch's council is corrupt. If Gale and Dillon want a life together in Ireland, they have to unearth secrets threatening to destroy the firm and family in Scotland.

Take a peek at A Witch's Quandary book trailer.

A sneak peek between the pages of A Witch's Quandary:

A loud pop sounded. Gavin appeared in front of Dillon. “What the bloody hell is going on here? I felt shock waves all the way to me house.” Gavin paused to survey the room then glanced outside. “Quinn and Amos are on their way. Had to interrupt the poker game as there ‘twas a problem at the pub.”

The owl flapped her wings and let out several screeches in succession. Finally, she circled the house and landed on the porch railing clicking her beak angrily.

Gavin glanced at the picture Dillon held. “Good God man, what have you done?”  Gavin tore the picture from his friend and stared at it. “Who’s the woman?”

“An old friend from college. Nothing more. She’s a reporter. I met her for lunch to find out what she knew about a case involving magic, my brother and I are working on. This picture was taken completely out of context.” He took the picture back and glanced at Gale. “We need to sort this out alone. Now.”

“A bit bold of you after that.” With her well-manicured fingernail painted in purple with silver sparkles, Gale pointed at the offending picture and glared at him. “You made your position quite clear when you left. Now a few weeks later you’re here making demands. Take your picture and yourself back to Scotland. Don’t darken my door again.” She whirled around and marched into the kitchen.

Thanks for stopping by and taking a peek at  Summer Solstice Fun Facts and My new release A Witch's Quandary, available for preorder NOW, arriving July12, 2021!

Such fascinating rituals around summer solstice! Best of luck with your book.

I jumped over fire once, but it was part of the Rugged Maniac 5K obstacle race. All the traditions you mentioned around the summer solstice are fascinating! All the best with your upcoming release!

Thank you Jessica and Jennifer for stopping by and reading my post. Appreciate the well-wishes too! Have a great week!

Do you use a lot of Wiccan tradition in your books, Tena? Best of luck with A Witch's Quandary?

What a great post! I love the Litha celebrations. This year my family's sunrise ritual was dodging raindrops and our fire kept going out. It was hilarious. I made wreaths of St. John's Wort to hang around the house, and we baked honey cake which quickly disappeared.

Congrats on your new release!

Thank you everyone for stopping by. Yes Linda I use Wiccan rituals in some of my books. Marilyn love to hear about your damp ritual. We got a but wet too. Diane the ritual around Sumer, fall and winter solstice have always fascinated me.

Good info - and best of luck to you on your latest release!

Thank you so much Karen! Glad you stopped by!