Monsters Lurking in the Old West by Marilyn Barr

I love writing a romance where someone with a hidden monster finds love despite their beastly nature. Before I fell in love with the Ephraim shifters of the Old West, I found many monsters in Arapaho legends who I considered for my upcoming release, Dance to a Wylder Beat. (What’s an Ephraim shifter? Check out my previous blog post here.) While I can’t guarantee at least one of these monsters will not end up a romantic hero in a future Marilyn Barr paranormal romance, these are my top five most inspiring that didn’t make it into Dance to a Wylder Beat.

I found my treasure trove of monsters at the University of Colorado Boulder’s Center for the Study of Indigenous Languages of the Old West. Many of them have been expanded in anime, video games, and horror movies but I wanted to get as close to the true Arapaho legend as possible. Because of the nomadic nature of the bands and tribes, many of these legends overlap with other Native American creatures and stories (especially those of the Gros Ventre and Cheyenne). Also, the names of these monsters have been “Anglicized” to use our alphabet so spellings may vary by source.

1.       Chebbeniathan translates to the “Spider Above”. This is the being responsible for creating our Earth and manipulating the “strings of fate”.  Nartan mentions this being in Dance to a Wylder Beat:

As the sun rises, I carry my anger to her cabin door and bang on it to wake her. The door creaks open, and fear freezes my blood. Did the candle stay lit because she was kidnapped under my nose? I set my water pail down as I listen inside. She was cagy about bears yesterday. Did her fear attract one to her bedside?

It is common wisdom in the Arapaho tribe that what you say is what our Creator, Chebbeniathan delivers. With more bravado than common sense, I run empty-handed into the cabin.

2.       Nihancan is a spider shifter who is a trickster in their myths. I was attracted to the story of Nihancan and the bear shifters (I wonder why?) until I read it. Nihancan finds a few plums and lures the bear family from their den with the promise of more. Momma bear agrees to let them babysit her cubs while she goes with the eldest cub to pick the plums. There is no Papa bear in this story. When she returns, the trickster has eaten the cubs and dug a hole in the bottom of their den. The bear shifters charge down the hole in anger and get caught in the awaiting webs. Yikes! After a few interactions with the settlers, the word Nihancan came to mean “white man” as well as “trickster” in the Arapaho language. 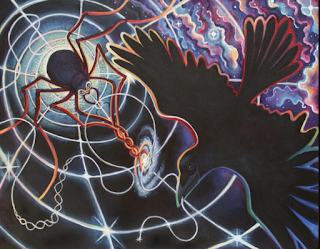 Artist Rendition of "The Web of Life" from SongOfGaea.com
Hiincabiit translates to “Water Master”. This horned river-serpent is featured in many different tribe’s myths and pictographs. While it was giant and scary in its description, it was a good monster. Offerings to the closest serpent would yield good luck while hunting or in war. Someday there is a non-zero chance I will write a romance starring a lonely river monster whose fierce face makes them misunderstood. I found the stories of this monster so inspiring; I couldn’t help but refer to them when describing the gunsmith’s forge in Sound of a Wylder Silence (coming in 2022):

The left wall is covered with guns, yoked by chains like beads on a string. I suppose having them locked is best, but the display reminds me of a cross between an evil charm bracelet and a firing squad. Only slightly less frightening is the forge hearth at the back of the shop. Flames leap within its cavernous mouth as it awaits its next meal like the Hiintcabiit monster of the rivers. Only true respect will keep the beast from feeding upon the humans with the courage to work with them. 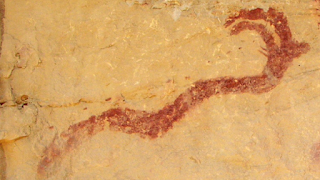 1.       Boh’ooonii’eihii is the name of the thunderbirds. There was a fiery bird responsible for all the summer weather from droughts to floods and tornadoes.  This bird was large enough to catch and carry a killer whale in its talons. This bird was balanced with the “Winter Owl” of the same name which is responsible for snowy weather. Wouldn’t a love story between the Summer Thunderbird and the Winter Owl be bittersweet? They could love one another but not get along, so they separate themselves for the good of the Earth…sigh.

2.       Hecesiiteihii translates to the “Little People of Strength” but they are not connected to a certain princess movie with seven such people. These cannibal dwarves have terrifying tales associated with them. From stealing limbs off bodies while the owner sleeps to snatching babies, these dwarves are the stuff of nightmares. The good news is that in Arapaho mythology they are extinct. A great war united all the tribes of all the nations to fight off the dwarves and humans prevailed. With invisibility, super speed, strength greater than humans, aggressive temperaments, and unlimited hiding places, how were they defeated? Legend says they would take out their hearts before battle to be temporarily undead and invincible. A clever brave found a stash of hearts and destroyed them during the battle. One by one the dwarves dropped where they stood. 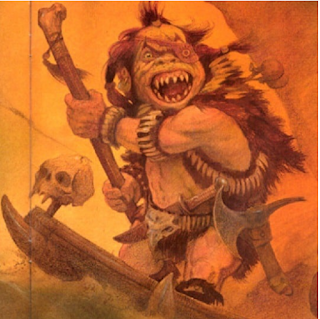 Are you ready to travel to 1878 to meet the magical Nartan Sagebrush? I promise he's not a monster - only his temper. He’s an Arapaho Shamanic apprentice who would have told the stories of these monsters to his brother, Ikshu. Their story, Dance to a Wylder Beat, starts when Nartan gives up his mystic ways to become a humble leather tanner to assimilate into the Wylder Community, in Wyoming Territory. When straddling two worlds has stressed him to the brink, he reaches to his spirit guides for help. The guides suggest a catalog bride and they have just the girl in mind. Nartan wasn’t comfortable in his skin before she crawled under it. Now he burns…

I adore regional mythology. While my schoolmates were mooning over teen magazines (okay, I had my share of them!), I was leafing through legends and myths were my imagination could rule unchecked . . . after all, I wasn't going to be Mrs. David Cassidy . . . Myths contain the wealth of our hopes and fears and make for the best reading because they whisper of possible truths.

Same here, Nancy. I love to dream about what prompted some of the cave drawings. Did they actually see those animals? Some of the early Cenozoic creatures in the Americas would be terrifying if one met them face-to-face.

It is always interesting to learn tales from other cultures. Great post!

Thanks for an interesting post. Now I'll have nightmares. :-)