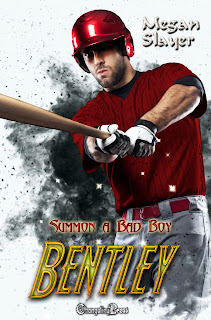 Natalie’s ready to summon her very own bad boy and try her luck with love.

I call on the fates to bring my love to me. As I will it, so mote it be…

Natalie Harvey wants a guy who not only understands baseball, but supports her love of the game. When she meets bad-boy first baseman for the Cougars, Bentley Turner, she can’t help but fall for him. He’s sexy, strong, athletic and irresistible. He’s her perfect man, but what if he’s not interested? The spark is there, and she decides to invoke the spell. Why not?

She’s ready to summon her very own bad boy and try her luck with love.

“I’d like someone to take me to the ballpark and not expect me to pay to get them in or get them up close to the team. Just to watch a game with me,” Natalie Harvey said. “I thought I’d find someone by now.” She glared at her friend Sarah. Sarah could be loyal and sweet, unless Sarah wanted something.

“I can’t help it that you’re hard to please.” Sarah fiddled with her watch. “You’re too picky.”

“Well… don’t have a job that entitles you to special treatment and think men won’t try to get in on said special treatment,” Sarah said. “And I don’t want to go to yet another baseball game. I mean, once you’ve seen one, you’ve seen them all. But right now, I’m testing something.”

“You’re…” Sometimes she wondered why she even tried. Sarah could be rather self-centered at times. “I happen to like baseball.” She liked all different sports.

“I doubt that.” The minor-league games attracted quite a few fans, because the games were just as exciting as the major league ones. Every player was hungry to show his skills, and every play mattered because it could prove the player’s worth to the next level teams. If the front offices or coaches saw potential, the player would ascend to the next level. Plus, the games were entertaining. Spectators were close to the field, the food was inexpensive as were the tickets, and the food was better than some restaurants.

“You have to pay attention to the various scores, players, transitions and all that for your work. Why would you want to go to a baseball game on your day off?” Sarah asked

“You mean transactions,” Natalie said. “Because I like baseball.” Yes, she worked weekends on the sports team for Channel 7, but that didn’t mean she couldn’t like sports outside of work. She’d scored tickets to the game and should be pumped to go -- except she didn’t want to go alone.

“Transactions, transitions… they’re moving back and forth.” Sarah waved her hand. “You knew what I meant.”

“I did.” She watched Sarah tap her phone. “By the way, what are you testing? The spell? It works. Karey got it to work and so did Mandy. It’s not a fluke.” Why didn’t Sarah see that?

“We haven’t gotten it to work in three months,” Sarah snapped. “There’s something wrong.”

“Yeah. Us.” She hated to be blunt, but Sarah needed the truth. “We keep picking up guys we know are shit. I didn’t try too hard with Dwayne and ta-da! He didn’t work. Nikki didn’t really like Callum, and that’s why that didn’t pan out. We’ve simply tried to keep you happy and have used the spell, but we’re not exactly finding our Prince Charmings because we’re not looking hard enough.”

She’d gone this far and might as well finish. Sarah wouldn’t get the hint until someone spoke straight with her. “You’re so busy trying to get us hooked up, but you’re ignoring the choice for you. Why can’t we let this happen more organically?” Natalie asked. “Or give us the time and freedom to find our guy?”

“We have had success and will again, but I’m concerned it’s taking too long,” Sarah said and shook her head. “But there is no good choice for me.”

“No?” Natalie could think of at least one good guy. “Kurt means nothing to you? He’d give his right arm, leg and nutsack for you.”

“Right,” Sarah said. “He’s an annoyance, and he’s not that invested.”

“I suppose you’re right. He does have a girlfriend now,” Natalie said, intentionally annoying Sarah. “I saw them together two nights ago.” He’d been out with his sister, but Natalie wasn’t about to tell Sarah that.

“What?” Sarah paled. After a moment, she regained her color and smiled. “Good. He should move on.”

“Uh-huh.” Sarah still loved him, but her pride prevented her from giving him another chance. One day Natalie would ask what Kurt had done to make Sarah turn on him, but that day wasn’t today.

“This isn’t about me. It’s about you and Nikki. How about instead of going to the game, you come to the bar with us?” Sarah asked.

Sarah rolled her eyes. “You get tickets for free because of your job.”

“So?” That didn’t mean she should waste the chance to go. “I do have to keep tabs on the players.”

“Would you happen to be looking to hook up with one of those players?” Sarah folded her arms. “Some of those soccer players are pretty hot.”

“Baseball players are, too.” She shouldn’t have said that. “But they’re like other guys. They find out I’m a sportscaster and want things from me that I can’t give them. I don’t seem to find any decent guys. I meet athletes who want to get noticed and drunks who spill things and also want to get noticed.” She’d been kissed three times because she’d been caught on the kiss camera. Why did the person running the camera insist on putting her on the spot? The guys who’d kissed her weren’t attractive and none had her permission.

“I need to find someone for you for the spell,” Sarah said. “There has to be someone.”

She hadn’t heard a word Natalie had said.

“I need to go. Nikki’s waiting on me.” Sarah left the table and strode away.

“Thanks.” Natalie sighed. She’d been left at the table and with the bill… again. Next time, she’d tell Sarah to shove it instead of meeting her for lunch.

Natalie waved down the waiter who returned a moment later with the bill. She paid, then finished her tea. Fine. She’d go to the game by herself. It wasn’t like she’d never done it before. Most of the time, she tried to get in on the spectator play afterward. She’d played softball, soccer, basketball and run track in high school, then run track and played softball in college. She knew what she was doing on the sports field.

She walked out of the bistro, and her thoughts turned to Sarah’s dismissal. The spell. Sarah swore she’d hook up every member of their friend circle with their perfect guy because of the magic. The spell worked for two of the women, but they weren’t going to find high-class men by hanging out at a bar.

She shook her head as she started her car then drove across town to the baseball stadium. Of the many things she liked about having a minor league team so close was the ample parking. She never had to walk more than a few hundred yards, and the lot was well-lit. She locked her car and hustled up to the ticket window. Once she showed her credentials and ticket, she gained entrance to the facility.

Natalie strode over to the first-base side and located her seat. When she was on the clock, she liked to sit right at the edge of the field to better take in the action. Since she wasn’t working, she’d sit four rows up and simply enjoy the game.

She loved the atmosphere of a ballgame. The sounds of the crowd, the smell of the food, the excitement in the air. The Cougars scored quickly in the second inning, and she made a few notes on her phone. The sensation at second base, Dalton Cohn, had made three great catches and even managed two double plays with the first baseman, Bentley Turner.

Natalie watched Bentley Turner in action and couldn’t help but sigh. He had a temper at times, looked like he’d stepped out of a bar, and could swear a blue streak, but he moved with grace and had skills on the field. If he hadn’t injured his shoulder defending first base last season, he’d still be in the majors and probably racking up good stats. Instead, he’d been relegated to the minor leagues to rehab. She’d spoken to him a few times and loved the deep blue of his eyes and his easy smile. He could be cocky and pushy. Rumor had it he’d bedded women in every city and left a string of broken hearts in his wake. It could all be rumors, but...