Bring it Back! Thursday Presents: Wolf Lake and Kindred The Embraced

I'm a nostalgic TV lover which I freely admit. Most often I'm diving into my dvd collection trying to find an oldie but goodie and most of them fall into the speculative realm whether they be sci-fi favorites or a hint of the paranormal.

Thankfully the SF channel and Chiller have been bringing some oldies but goodies back to the forefront for the month of October. If you get both of these channels, you'll notice that today on the SF channel there's a marathon of that old goodie Lou Diamond Phillips werewolf vehicle Wolf Lake all day and Friday is the C. Thomas Howell and Mark Frankel's sexy vampire show Kindred the Embraced. I thought it was a good time to have a call for bringing these two back. After all, they both ended at the peak of their season and could have offered so much more.

As the story goes, Lou Diamond Phillips plays Seattle policeman John Kanin. On the eve he proposed to his girlfriend, Ruby, she is kidnapped and this sends him on a hunt to find out what happened to her. He ends up in her hometown of Wolf Lake where the inhabitants hold many secrets, much of the fact that most of them are werewolves.

The show was first broadcast on CBS around 2001 and I have to admit I didn't catch it during it's first run since it didn't interest me. As I caught the reruns on then Sci-Fi channel, it caught my interest because it had a little bit of that weirdness meets small town life like one of my favorite 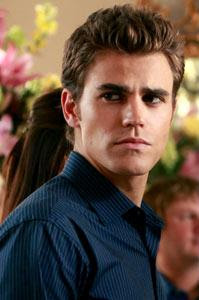 shows, Twin Peaks. I liked how the pain of growing up was shown in teenager Sophia Donner (daughter to Sheriff Matthew Donner played by Tim Matheson) as she is on the verge of fighting puberty with her oncoming werewolf capabilities. She is into the resident popular and hot guy Luke Cates (played by Paul Wesley who is coincidentally starring on a current PNR show The Vampire Diaries) but he is too busy playing mind games with any and every girl that throws herself his way while fighting his growing feelings for Sophia. Toss in his mother Vivian (played by Sharon Lawrence) as the resident Alpha Queen dipping with the younger kept man Tyler Creed (played by Scott Bairstow) and it already sounds like a paranormal soap. The series wasn't too campy despite all these soap tropes. I liked how the family was connected in its town through history and my favorite character Sherman Blackstone (played by Graham Greene) was always a welcome to give some insight into the town and how the paranormal ties in.

The show only lasted 9 episodes, hardly a full season so there wasn't enough time to really get into the motivation of the characters. I really would have loved to have seen more of the show and how they would have integrated the knowledge of the other

being tucked away from human existence (represented by Lou Diamond's character).

If you have the SF channel and/or Chiller, definitely check this series out if any reason but to get your paranormal fix and to ponder the possibilities. I'd love to see this show brought back but the cast has moved on with Lou Diamond Phillips already starring on SF's Stargate Universe, and Sophia's Mary Elizabeth Winstead now on the silver screen as a scream queen. 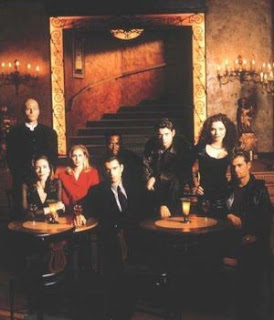 Another short lived show that I think was a bit more substantial was Kindred: the Embraced. Loosely (very loosely) based on the White Wolf role playing game Vampire: the Masquerade, the world of Kindred is introduced through San Francisco police officer (see a pattern yet? ;-)) Frank Kohanek. Frank believes that his city is being taken over by alleged mobster Julian Luna in a turf war. What he doesn't know is Julian is indeed head of a community as Prince, but not of mobsters...of vampires. Frank and Julian butt heads especially after Frank loses his love Alexandra who wanted to trade her history in for a lifetime with Frank. But the masquerade had other ideas.

I love this series perhaps more so than Wolf Lake because of the layers and world building here. True there's only so much one can do if they stay with the usual pack dynamics storyline with werewolves. But Kindred made use of the White Wolf background. As mentioned before, Julian is the "prince" of the city, ruler of five groups (or "clans") of vampires:

The Ventrue (like Julian) are business types and usually function as CEOs or other types leaders. The Nosferatu (which you would imagine look like their name sakes) live hidden away from civilization in their own existence, the Brujah are gang-like, acting and living on raw emotion. The Toreador are based on the arts and see their existence in bringing out the beauty of their creations. The Gangrels are biker/gypsy types who move at a whim wherever the wind takes them. Not rarely seen over the course of the show but highlighted are the shape-changing 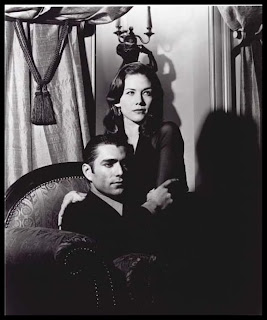 assassins called the Assamite clan which are clouded in mystery.

Each group has a leader called a Primogen who serves on a board with the Prince of the City that overseas the rest of the Kindred.

The vampires in Kindred do a mixture of old style mythology with new. Kindred can change into wolf form, go into sunlight on a little at a time if they have fed and still thirst for blood.

A running theme throughout Kindred is forbidden love as shown in Julian's human niece Sasha (Army Wives' Brigid Walsh) who comes to town and becomes interested in his protege Cash. Naturally Julian wants to keep Sasha away from not only Cash but the secret of the Kindred as well. Her transition into the world of the Kindred is both heart breaking and shocking and still ranks as one of my favorites in the series. Another 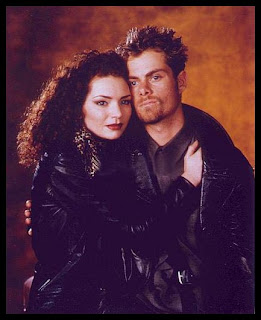 form of forbidden love is Julian's interest in reporter Caitlin Byrne (played by Kelly Rutherford) despite sharing his heart (and his bed) with Lily Langtry (sci-fi alum Stacy Haiduk). Whew! Like Wolf Lake, there are some soap tropes here that pop up from time to time. After all, the show as produced by Aaron Spelling himself, but it never feels too over the top. The show mixes it's romance and paranormal elements with a side of 40s style and noir. The first episode even futures music from the feature film version of Interview With the Vampire which gives it a cinematic feel.

Although Kindred last shorter than Wolf Lake by one episode, it still feels like a full series on its way to creating it's own mythology. I fully believe if it were brought back in these vampire crazed times, it would hit all the right notes with viewers. At the time it aired in 1996, there was talk of continuing into a second series since the first season left off with many places to go. Sadly, the production was halted when lead actor Mark Frankel died in a motorcycle crash. I couldn't see a series without Frankel as Julian Luna himself. Adrian Paul could have been a replacement but he was still filming the Highlander tv series until 1998. So, sadly we are only left with the 8 episodes to go by. 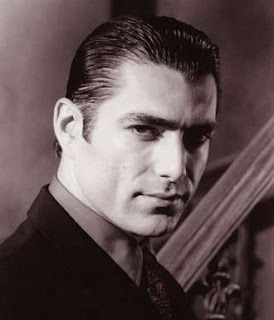 Both of these series were way before their time. The early 90s had a wave of paranormals that sat on the shelf and were rejected by booksellers, publishers and agents alike who "couldn't move a vampire, werewolf, etc. book even if they gave it away". There were still us fans out there, but without the mainstream media behind us, were just whispers in the dark. It's a shame their stories won't be able to continue because the potential was very much there. I'd love to see these two brought back to our tv screens but even if we don't get to see our fave characters visually, I would happily settle for a narrative closure. If not, there's always dvds and syndication to fall back on.

Rae, I enjoy coming over to see what new things you dig up each week. I am NEVER disappointed! I remember a little bit about Wolf Lake only because of Graham Greene, who I think is phenomenal in anything. But never heard of Kindred.

I'll be keeping my eye open for both of these this weekend (on my down time.)

Thanks for bringing the 'forgotten' wonderfulness of TV to me.

I've never heard of either of those shows. LOL But I do watch Fringe, mostly out of protest because I'm making a marriage compromise LOL Hubby loves it and I watch it with him until it gets too creepy and I have to got back to Nick at Nite LOL :-)

I'm a big Kindred fan and *gasp* inspired my own Nosferatu kick I've been on for the past year. LOL
Never heard of Wolf Lake and would love to watch them.
So nice to know I'm not the only girl geek out there Rae.
I don't watch Fringe (more for the time factor) but am a Wardhouse 13 and Stargate fan.

I never heard of Wolf Lake but did love Kindred. I watched that on Sci-fi one day and thought it was a shame the title character passed away. That would have been a wonderful series.

It's good to see paranormal series making a comeback such as Fringe, etc...

Wolf lake is a personal fave. It's really strange how these great shows just die, and some truly unspectacular uninspired TV shows somehow outlive them.

Thanks Joann! I love sharing some oldies but goodies. :-D I so agree, Graham Greene is just awesome and he seriously rocked the Sherman role. I wish there was a continuation because I'm going through withdrawals now lol

Thanks Rebecca! I haven't seen Fringe as of yet but I heard it's pretty good. I'm not a big fan of Abrams but I may take a looksie since it's likened to X-Files (which I LOVE).

Sandi, high thee to a teevee. :-D I think you'd like both series. They're not too out there and they each have a wonderful story. Lol I like that compromise!

Annie, woo hoo fellow Kindred fan! That's awesome you got inspired! I The Nosferatu are kinda cool even though they're kind of known as the sewer dwellers of Kindred.

Definitely check out Wolf Lake! If you like Kindred, you'll enjoy that one. I rewatched it today and fell in love with the series all over again. Woo hoo for the geek girls indeed!

Hey Liena! Same prescription for you! Definitely check out WL. I would have loved to have seen Kindred continue and I agree about the title character. Mark Frankel really made that character his own.

Heya Parker! Welcome to PR. :-D I so agree. They always kill them when they're at the height of revealing everything, then replace them with some lame shows. I'll never understand studio and TV execs. :-/

Ooh, if you guys want to see a bit of Wolf Lake, it looks like Youtube has some clips and things up! Yay. :-)

I LOVED Wolf Lake, though I never saw it when it was on. I did watch The Kindred because I loved Mark Frankel, who played Julian, from when he was in the miniseries Young Catherine. Wolf Lake had better production, IMO. I rewatched it last summer.