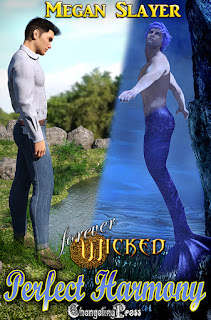 Love on the lake? With a merman? Impossible. Or is it?

Camryn Matthews knows how to make music and dance, but he’s tired of living a lie. Being part of the recording group Low Down is fine, but he can’t be himself. The fans want a fantasy, not a gay man. Besides that, he can’t make the music in his soul. Where’s a man to look when he needs a fresh start?

Rian’s the prince of the mers, and he’s tired of being used. He wants someone to love him for his song. When he hears the sweet, low voice coming from the cruise ship, he knows he’s found his match. But will the human sacrifice everything to live in Paradise, deep in the heart of Lake Erie?

He stared out at the darkness of Lake Erie. Jesus. He was on a cruise around Lake Fucking Erie. He’d grown up in Cleveland and wasn’t fazed by the lake. He also didn’t see the attraction. The band could’ve chosen to cruise the Keys or the Bahamas and they’d picked… Lake Erie. Then again, the band wasn’t the powerhouse they’d been a year ago.
The music business had shifted. Vocal groups who danced weren’t popular. Chanteuses were. Singer-songwriters who sat alone on stage with a guitar were in vogue. He couldn’t blame the band for wanting to chase the spotlight and keep the fans.

The best way to keep the fans was to go to them… and cruise Lake Erie.

He drank in the darkness of the water and sighed. The lines of his longest solo came to mind. He sang the song. Who cared if he wasn’t on stage? He wasn’t sick any longer, but heartsick.

“I’m looking for my special one. The one who makes me come undone,” he sang. “Who sees me to my core, who can’t love me even more.”

He’d written those words for his high-school crush. Taye never knew he’d been the object of Camryn’s affection. How could he? Camryn hadn’t come out, and Taye wasn’t homosexual.
He sang the lines again. The music wasn’t gone, and he still loved to sing. He might not be the loudest, but he had a rich sound. Honeyed, he’d been told.

Another sound caught his attention. Someone was singing with him. He paused. Were the guys coming upstairs? Were they in another suite? Coming onto the deck?

The song came to him again. Low, honeyed like him, but sadder.

He sang the lines of the song a third time. The voice mixed with his, making beautiful harmony. Natural harmony. He stopped singing. Where was the vocalist?

He moved to the edge of his balcony and searched the visible parts of the decks for the singer. No people came into view.

“Where are you?” Camryn asked. “Who are you?” He would love to meet this vocalist. “Hello?”

Sounds intriguing, Megan. Thanks for sharing.