How Music Plays a Role in My Stories by Mary Morgan

I’ve often said music feeds my soul for creativity. It stirs the muse and my writing soars. Dragon Knight’s Ring was an emotional story for me. Since this was the last book in the Order of the Dragon Knights (my first series), I had to search for different types of music—ones that would be epic and convey the emotion of the final story. 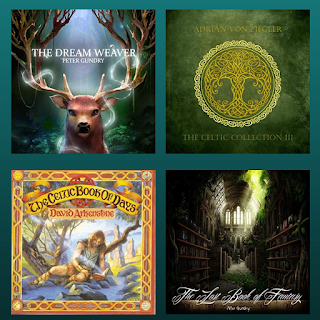 Here's my playlist for Adam and Meggie’s from Dragon Knight’s Ring, and the other Dragon Knights along with the scene I was writing…

1. “A Celtic Lore” by Adrian von Ziegler, from the album The Celtic Collection. I listened to this song during the beginning of Adam and Meggie’s courtship. It was soft, hesitant—like both of them.

2. “Yearning Hearts” by David Arkenstone, from the album Celtic Book of Days.  Adam is desperately trying to find out what is bothering Meggie. He’s hoping to spark some memory of their past together by skipping stones across the river.

3. “King of the Woodlands” by Peter Gundry, from the album The Dream Weaver.  A meeting between the evil druid Lachlan and Meggie. Cannot say anything more. This song was perfect.

4. “The Witch’s Tale” by Peter Gundry, from the album The Lost Book of Fantasy. The druid, Lachlan is preparing and plotting his one last battle against the Dragon Knights.

5. “The White Witch” by Peter Gundry, from the album The Lost Book of Fantasy. Adam’s journey to visit his home, Castle Leomhann. He’s unprepared for what he will find.

6. “Circle of Life” by Adrian von Ziegler, from the album The Celtic Collection. I listened to this many times while writing the scene where Meggie’s memories are restored, and she greets Adam.

7. “Storm Cry” by David Arkenstone, from the album The Celtic Book of Days. Adam’s quest to reach Meggie before the battle begins.

8. “Morrigan—Goddess of War” by Peter Gundry, from the album The Dream Weaver. A fitting song for the pre-battle between the Dragon Knights, Lachlan, and the Dark One.

9. “The Quest of Culwch” by David Arkenstone, from the album The Celtic Book of Days. I used several songs for the final battle, but constantly played this one until I knew I had poured out every detail.

10. “Ceridwen—The Potion of Knowledge” by Peter Gundry, from the album The Dream Weaver. My farewell song to the Dragon Knights. It starts slow and then builds to this powerful ending. Did I cry writing this ending? Aye! I sobbed buckets! The Dragon Knights dwelled within me for fifteen long years.

Currently, the Wolves of Clan Sutherland (my third series) dominate most of time and thoughts. Usually, I turn to YouTube for my music selection. Here’s a brief sample:

I’m curious. Any writers out there who use music to aid in their writing? Do share! 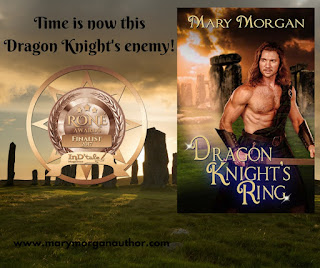 It's been a while since I've made a playlist (maybe because I used to listen to music when I wrote at work and now that I'm retired, I'm more used to the silence) but I loved putting them together. Time to get back into the habit. Yours is lovely, a must listen now that I'm heading to Ireland.

Nancy, on my walks in the morning, I listen to Celtic instrumental music and begin to plot. I've solved many issues with my stories while listening to certain songs, especially those from Riverdance. How wonderful to hear you're going to Ireland! What fun! We're planning to return but not for another couple years. Enjoy! :)

I'm familiar with David Arkenstone. I love the CD you've pictured. I agree music can really set the tone for a scene or even lyrics supply inspiration for dialogue.

Great post! I always listen to music. It's constantly on, as I do not like silence. And I definitely have different music that I listen to when I'm writing certain scenes. It can help with the feeling I'm trying to convey to my readers.

Linda, most of the melodies I listen to are instrumental, though there are a few with vocals. I tend to get absorbed in the rhythm of the music and it transports me to another realm within my writing. Thanks for stopping by.

Exactly how I feel, Jessica! Music draws out the emotion, in my humble opinion. :)

Oh! Thanks for reminding me of this, Jessica. I, too, have different songs I listen to for certain scenes. Battles require heaving and intense instruments. Softer melodies for love scenes. :)

I love music -but rarely have it on while writing since it distracts me. I do have a few books that I would play a certain artist while I plotted and planned the story, but I couldn't listen while doing the actual writing.

I love music, but I also love silence. I can't write listening to music with lyrics (unless they're in a foreign language). I love Celtic music, so evocative. Ending a series is bitter-sweet. I hate leaving the characters, but usually I'm ready for something new. Best wishes.

Fascinating, Maureen. :) I have an author friend who can't write with any music as well. She also says it distracts her. I find it wonderful how we can share/relate what works and doesn't work with our writing.

Well, the main series is finished, yet I'm still writing/creating more Dragon Knights stories. As one reader stated, I still have the children along with the children of the Fenian Warriors series. Thanks for your input, Diane. :)

I love music, but not when I'm writing. I like silence, only the sounds outside, bird chirps, people walking by, that kind of thing. I do listen to music while I'm completing the character worksheets for a new book. I enjoyed your post and your music. Thanks for sharing!