Billionaires in Space by Diane Burton 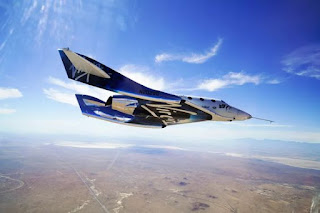 July brought two huge events. In the first, Richard Branson (Virgin Galactic) plus four others were launched into suborbital space aboard the VSS Unity 282,000 feet above Earth. 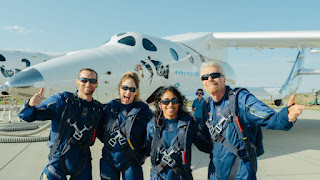 Branson tweeted: I was once a child with a dream looking up to the stars. Now I'm an adult in a spaceship looking down to our beautiful Earth. To the next generation of dreamers: if we can do this, just imagine what you can do.

Nine days later, Jeff Bezos (the richest person in the world) along with three others traveled into suborbital space aboard New Shepard, a rocket topped by a capsule. They reached a height of 351,120 feet above Earth. New Shepard was named for Alan Shepard, the first American to fly in space. 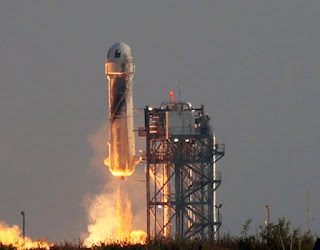 Besides Bezos, his brother, and 18-year-old Oliver Daemon (a Dutch physics student, 82-year-old Wally Funk finally realized her dream. Wally is a member of the famous (or infamous) "Mercury 13", a group of women who completed all the tests required of the original Mercury astronauts yet were denied the opportunity to go into space because of their gender. Wally has the distinction of being the oldest person in space.

Funk said: "It was great. I loved it. I can hardly wait to go again."

As I watched the landing of New Shepard, I was captivated by Wally's enthusiasm. The picture (above) of her exit from the capsule says it all.

Even though I knew the names of every Mercury and Apollo astronaut, I never knew about those women. Shame on NASA for denying them their dreams.

I've always been infatuated with the space program. I lined the bulletin boards in my classroom with pictures from space as well as the astronauts. If I'd been given the opportunity to go into space back then, I would've jumped at the chance. Until Wally's trip, I always thought I was too old. Now, I'm not so sure. I'm younger than her. 😊

When I blogged about my novella Mission to New Earth, I asked readers if they had the chance would they go into space. Most who replied said they'd go if they could come back. My thoughts exactly. We all thought of our families and wouldn't want to leave them forever, like the characters in Mission. Their task was to explore a "Goldilocks" planet, one that was just right for humans. However, the planet was so far away, they couldn't return. A one-way trip. Unlike the billionaires, who hoped they would return in one piece.

But what have these two historic launches proved? Is their a market for tourism in space? Would customers be willing to fork over hundreds of thousands of dollars for the chance to say they've been in space? I'm pretty sure there's already a waiting list.

I'll ask the question again: if money were no object, would you go into space? 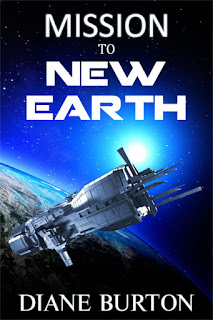 Earth’s overpopulation and dwindling resources force the United Earth Space Agency to ramp up exploration of new planets for a possible new home. As Sara Grenard and her team prepare for launch, are they ready for the one-way trip? Will they be in time?

Yeah, I'd love to go into space... probably why I write SciFi romance! Great article, Diane. Even though some folks make fun of the billionaires going into space, I'm thankful someone is continuing the adventure!

Me, too, Keri. I think we'll go farther into space now that commerce is making it possible.

I don't know if I'd go into space the way they did. I'd want to actually have a destination. Maybe a quick stop at the space station, or to the moon. Otherwise, it would feel like the Sunday drives my father used to take us on, where we'd go in the vehicle after lunch, and drive around until dinner. That wasn't fun for me.

My dad did the same thing. Sunday drives. LOL I was surprised they didn't go farther, too. I'd want to go somewhere, like you say, Jess, to the spacestation or the moon. I guess they had to start small.

Wow, loved your post. I too watched the landing and take offs on TV. Not sure I want to go into space with out a destination. And of course I'd want to come back. Thanks for sharing!

I deleted my earlier comment because I reconsidered. I would go into space given the opportunity. My family of three did those Sunday drives. too, sometimes to the mountains or the lake, but I enjoyed them. I've always liked cars and maybe this was why.

I think I want more people going first to steamline the process before I go to space. I would love to join a colony on another planet but after the HVAC system has been perfected.

Thanks, Tena. I agree about having a destination. Just going up & back down seems too tame.

Linda, I thought we were the only ones who did the Sunday drives. LOL Ours was usually to Belle Isle (a park in the Detroit River) to watch the freighters. Sometimes, we'd drive along Jefferson Ave into the Grosse Pointes to look at the mansions. Funny the things you remember from childhood.

Marilyn, love the part about the HVAC system. Considering the heat we're all experiencing, I agree. Of course, if the colony was in a temperate zone, AC wouldn't be necessary.

What a wonderful post, Diane! I still recall watching Neil Armstrong make that historic step on the moon. At that moment, I wanted to become the first woman in space. Even went as far as speaking to a recruiter for the Air Force. Unfortunately, the fates had other plans for me and I never ventured into outer space (though I do within my mind). Yet I'm an avid stargazer.

This girl's feet are firmly planted on Earth . . . unless decades of disaster movies prove to be true and our planet becomes our enemy. Maybe I'd be the first to accessorize in space.

Mary, I remember that day so well. My dad, an avid movie taker, filmed the TV coverage of the moon walk.

LOL, Nancy. Some of those disaster movies were so real.