You Should be Watching - Legend of the Seeker

This week's blog post is brought to you by Rae's subconscious. Rae is currently detained as she is reading the newest Outlander book (number 7 - Echo in the Bone - go out and buy it now!) and will return shortly after she's reached The End. :-)

In honor of this week's repost from Rae's June 19, 2009 blog, we'd like to extend a BIG congrats to Legend of the Seeker composer Joseph LoDuca for his Emmy nomination and win! Congrats and kudos for making an awesome score! 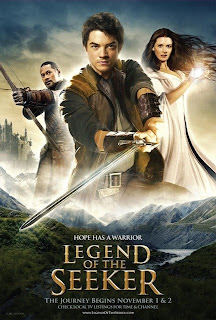 I forget where I had first heard of this show somewhere they mentioned the creators of Xena Warrior Princess had a new show. I'm a huge Xena fan and was so jazzed to see Sam Raimi and Robert Tapert returning to their fantasy roots.

I taped the show here and there but kept missing episodes in between. From what I saw it was pretty good but I can tell it was a show to see one right after the other. After I finally caught all episodes, I was hooked and I can say I flippin' LOVE this show!!! The first season plays like a long epic fantasy movie with a great satisfying ending. I'm not a big fan of shows that leave you with a teeth grinding cliffhanger at the end of the season (exception is Being Human cause I'm itching to see the rest of that show) so I was so glad when there was a conclusion here. I'm going to be watching and re-watching this series for years to come.

A few weeks ago I talked about the lack of strong females in movies but the growth of them on the small screen. Legend of the Seeker is no exception.

The story is one of good and evil. Evil ruler Darken Rahl wishes to enslave the midlands but every time there is a threat, a seeker arises to stop the threat of evil. Said hero is one Richard Cypher, a small farm boy who evaded the massacre of all first born infants based on the seeker prophecy.

Now I know there's a ton of Star Wars and Bible references running through your head, but the show makes good use of the hero's journey. I thought of Star Wars a bit while watching this in 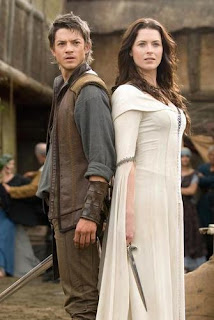 the beginning but the show cements it's own lore. On Richard's journey is a wizard with secret ties to him and a young woman named Kahlen Amnell, a confessor who wields her own power (and kicks some major butt!) to assist Richard on his quest.

For fantasy buffs, this show is a smorgasboard of goodies in the genre. Tons of magic, a gorgeous production value that looks like a movie in each episode, some humor and fantastic performers along with a budding star crossed romance make this one of my new favorite shows. Each story ties into the other while showcasing mini stories in each episode. The show is loosely based on Terry Goodkind's Sword of Truth fantasy series and I'm definitely going to pick them up lean the origins of the show.

I mentioned a strong heroine and Kahlen fits the role to a tee. She's a mixture of strength, sensitivity and smarts. The kind of heroine that's been making appearances 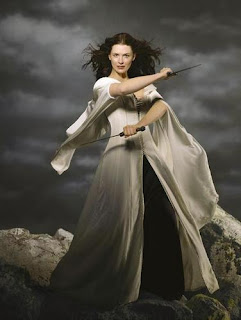 on a good amount of shows in this day and age and finally we have one in the speculative genre. Bridget Regan is gorgeous and great as Kahlen and I love seeing her kick butt with her two daggers and especially when she "confesses" her enemies, putting them under her control. She joins my favorite she-ros of Princess Leia, Xena, Storm, Rogue and a few other classics. Not to mention I love her outfits.

Craig Horner as Richard plays him as noble, a young go-getter and a good rising hero. I remembered Bruce Spence who played wizard Zed from the Matrix (he played the Train Man in Revolutions). When I saw villain Darken Rahl, I noticed he looked a lot like Haldir, the blond elf who met up with the fellowship at Galadriel's home and lo and behold, it was him with dark hair this time. If I had to vote for a best tv series villain this year, I would so vote Craig Parker as Rahl. Manipulative, evil, heartless, maniacal and cruel, Rahl is one those villains that you love to hate or maybe just hate to hate. ;-)

The writing on the show is awesome as it creates a great world with it's own rules of magic and it's shortcomings, humanity and it's delicate line between right and wrong, characters with threads of history and fighting for what's good in the world. While not quite a fantasy romance, there is a romance in the backdrop between Kahlen and Richard and the chemistry the two share is addictive. If I had dove head first into fandom, I would surely be a Kahlen/Richard 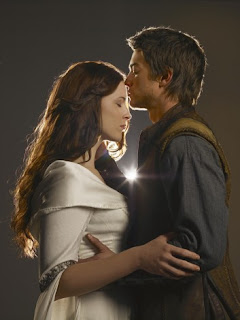 Joseph LoDuca is the same composer as for Xena and the soundtrack/score has a very epic fantasy feel to it. I love the theme and am sad it isn't played enough in the beginning but the longer version is during the end credits. I think I heard there will be a soundtrack released in the coming months and I'll be on board to buy myself a copy.

It may seem a bit too cut and dry to people, maybe a little bit predictable but with all the "hard and gritty" shows that try to be cheeky and complex out there, 'Seeker' is a good antidote for those looking for something that harkens back to the classics of the fight against good and evil against a gorgeous setting.

Legend of the Seeker has gone into syndication due to it's popularity and is to return for a second season this October November 7th.

Rae, you post the most interesting videos and stories - I've never heard of this. I'll have to take a look at it! It's pretty lavish and appears well done.

Thanks for sharing it.

I caught the tell end of an episode a week ago and wondered, "What the heck? How did I miss this show?" Do you know when it plays now Rae?

I've always meant to watch this show. There's either something else more interesting on the Food Network or I'm just plain writing and don't have time. As it is, I'm trying to stick to Fringe (unless it freaks me out too much this season) and Warehouse 13 LOL

The show looks like a good one. I never heard of it until now. I'll have to check it out. Thanks for the info about the show.

I love this show. Thanks for posting about it. I've been hooked from the first episode, but because it bounced around on channels here, I just got a season pass on iTunes and watched it that way. I have watched it over and over and over again. Did you hear that Charisma Carpenter (Cordelia) will be making an appearance in season two as Mord Sith?

Thanks Joann! I hope you enjoy it! It's really an awesome series and somewhat addicting. :-D

Annie, I've notice it pop up on the CW and sometimes WGN on weekends around evening or later in the night in syndication. Sometimes they show it out of order (grr) which is a bummer because some shows connect one after the other. As Heather mentioned, it looks like it's on Itunes and it's also on Hulu.com - http://www.hulu.com/legend-of-the-seeker The pilot consists of 2 eps but there should be 22 in all. Enjoy! :-D

Lol Sandi. Sounds good! I hear both shows are gaining lots of fans! If you don't mind watching tv shows online you can catch them here! *nudge nudge* hehe

Liena, I don't know why it hasn't been getting the push in promotions. Rob Tapert and Sam Raimi are TV heavy hitters and I would think the networks would push that and the fact that it's a really consistent and well written series. *shrugs* Tv execs, go figure lol. Glad to spread the news though. :-D I hope it has the Xena numbers and lasts 6 seasons. The Sword of Truth book series is up to number 11 so there's lots of fodder for great stories.

Heather, my pleasure and happy to meet a fellow Seeker fan! It's addicting, isn't it? :-D I hope it stays on one channel and one time for season 2 so it's easier for fans to find. Syndication is playing musical channels and unfortunately it can be hard to track it down. I'm tempted to have another repeat marathon myself. Oh yes! I did hear Charisma will be a Mord Sith! That'll be awesome to see because I haven't seen her tackle a hardcore character like Denna and her "sisters" yet! I can't wait to see the little girl Rachel (awesome name lol) again too. :-)