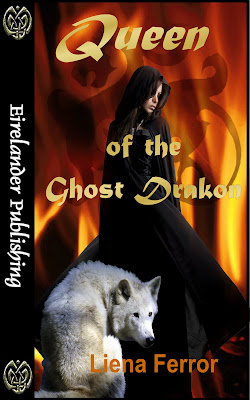 JHS – Please give a huge PR welcome to Liena Ferror. Liena’s the author of Queen of the Ghost Drakon, the first story in The Risen series. Liena's visited with us before and we had the pleasure of meeting Gannon Langon. I’d like to welcome you both to Paranormal Romantics and thank you for taking the time to talk to me. Can you tell us a little about who you have with you?

LF - This is Keara McCabe-Langon. She is mated to Gannon, whom you’ve met earlier. Go ahead and introduce yourself Keara.

KM - Thanks, Liena. As you can tell, I am of American-Asian ancestry. I got the taller height from my Dad. Anyway, you are more interested in what I am. I am a ghost drakon and fae hybrid. Both bring me unique abilities such as disappearing from sight, the ability to use lightning blasts, and the ability to do things like create clothes from mid-air. In my drakon form I’m covered in blue-gray colored scales that look much like the Hope Diamond in shade. My eyes are cat-like. I have large bat like wings and claws that are sharper than hell. Other than that, I’m normal.

JHS – Liena’s laughing and I have to smile myself at that. It all sounds normal. Liena, can you tell us a little about yourself?

LF - I’m from South Central Pennsylvania. I live with my wonderful husband and my beautiful daughter. I have a son who is currently serving in the U.S. Navy. I grew up amongst a family of readers. My mother and father instilled a love of reading and all things written into my brother and me. In my adult years, I found myself working as a data analyst and once again discovered my love of reading. I began to frequent the library more than once a week. My husband went to so far as to hang a hammock in the spare bedroom so I could have a comfortable place to read. My husband suggested I try my hand at writing since I read so much. I tried and fell in love. I still like to read but writing has become a big part of my life.

JHS - How long have you been writing?

LF - I have been seriously writing for about two years now. Prior to that, my nose was always buried in a book. One day my husband commented that as much as I read, I should try to write a book. The rest is history as they say. My first release is due out November 20, 2009 and the second in the series on April 16, 2010. Both from Eirelander Publishing.

JHS - Can you tell us a little about your favorite character? Is there one you prefer/like better than the others?

LF - I love all the characters that I’ve created in the world of The Risen. The Risen are females of drakon, fae, lycan, vampire, or demon parentage. The males are lycans and vampires and hard-headed as hell at times and sexy all the time.

LF - I thought you would, Keara.

JHS - Who inspired or inspires your writing most?

LF - My bookshelves consist of books by Nora Roberts, JD Robb and Clive Cussler just to name a few.

KM - Her bookshelves are packed with many different authors, Ms. Steele. She’s even got books from the early turn last century.

LF - Keara’s right. I love books and have been inspired by many authors.

JHS - When you’re not writing, what are some of your favorite things to do? Do you and Keara ever hang out together?

KM - No, Liena doesn’t hang out with us. Even though she is welcome at the Mansion at any time.

LF - Thanks, Keara. Gannon made the same offer. When I’m not writing, I’m reading or making jewelry. I’m a huge sports fan so I watch a lot of sports on TV. I’m pretty much a home body.

JHS - Are you working on anything new?

LF - I just finished up the second in The Risen Series, Frost at Dusk which will be release on April 16, 2010. The story is about an ice drakon or dragon and vampire hybrid heroine named Lena Erickson who uses her unique and deadly blood as a weapon to avenge the death of a family member. She is the mate of the Master Vampire of the Northeast Region, Andres Kaden. Together, they learn to deal with Lena, her unique abilities, and the changes she’ll inevitably go through.

JHS - Do you have any advice for new writers?

LF - First and foremost is to have fun doing what you do. Writing should never feel like a chore. It should be something you love to do. Second, find a good critique partner or group who can be honest with you and about your work. Someone to tell you when you are on track and when you’ve left the tracks. My critique partner has been invaluable to me.

JHS - How can readers get your book?

JHS - Heres an Excerpt from Liena’s book and I have to tell you, this book has some exciting battle scenes. And you’ll need to turn up the a/c when you read it because it gets pretty damn steamy.

JHS - Readers love to find out new things about their favorite authors, before you leave, can you tell us one thing about you that no one knows?

LF - I’m addicted to computer solitaire. I can play it for hours at a time and never get bored. I also love to play Mahjong Titans.

JHS – Liena, thanks for stopping by and for bringing Keara along. Trust me, you guys want to pick up a copy of Queen of the Ghost Drakon, the first in The Risen series, as soon as it hits the shelves at Eirelander Publishing.

And don’t forget to stop by next Friday. I’ll see who I can wrangle into the hot seat. In the meantime - Growl and roar-it’s okay to let the beast out. - J. Hali Steele

Oh dear, I felt like I was in that scene with Keara! Great job, Liena! Cannot wait to get to the book!

I used to be addicted to Solitaire too, the normal version and the Spider one as well, plus Freecell. Ah, the good ol' days!

All the best, girl!

These days, when I have time for gaming, I play Farkle on Facebook. Nice interview. Good luck with sales!

Thanks. I'm glad you liked the excerpt. I am so addicted to Solitaire. I never tried the spider solitaire. Might have to give that a try.

Thanks for stopping by!

Thanks for the compliment.

I played Farkle a few times but I know people who play it all the time. I'm sure if I kept playing it, it would become an addiction.

Nice excerpt. Really got a sense of their characters.
I used to play Majhong and Sudoku. Anything with numbers and patterns grabs my attention. LOL.

Liena did give me a fab excerpt.

I go to pogo.com and play the slot games *laughing* I can't figure any of those games out on Facebook! Especially that mafia wars which has a huge following - what's that about?

Great excerpt, Liena. I hope you have huge sales.

I'm glad you also enjoyed the excerpt. I'm proud of this book.

I tried Sudoku but couldn't quite grasp the concept LOL!

Have a great weekend!

I play Bejeweled alot on Pogo or I did before getting readdicted to Solitaire!

Thanks for doing such a good job making me look good. LOL!

Thanks for the compliment about the excerpt!

I hope your sales are huge as well. Can't wait for Addiction!

Liena, you ever see Sovereignkind in an over 50 room in the slot areas - it's me! lol that's how I wind down a lot.

And it was my pleasure to have you over.

Thanks to all who left comments today.

Have a great weekend everyone!

Hi :)
Thank you for the great interview and excerpt.
I loved the character Keara.
All the best,
RKCharron
xoxo
PS - Liena Ferror - are you on Twitter?

I'm glad you liked the excerpt and my character. I appreciate it.