I Am Number Four 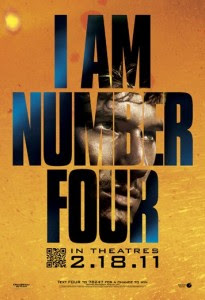 First there was Harry Potter. It captured the adult market as well as the young adults it initially targeted. Then Twilight hit like a tsunami, and had teens sighing in their seats, dreaming of vampires and shirtless werewolves. I have to admit, I don't normally go for young adult, but when I saw the title for the Pitticus Lore novel, I couldn't resist reading the book. http://iamnumberfourfans.com/

I Am Number Four is bringing science fiction romance to the big screen and I can't help but do a fist pump and yell out "Yes!" Finally. Move over vamps and weres. There's a new kid in town.

So, when the movie was released last Friday, I jumped on the chance to see it on the big screen.

With it's recent release as a movie, I Am Number Four is gaining quick popularity with young adults everywhere. Sadly, the movie was so entirely different from the book. Why?

It's not like the movie wasn't well done. It was, and if I hadn't read the book first, I'd probably love it. The action was there--the romance--the hot actors that make women swoon. Four's guardian, Henri, was thrown in there for us big girls, and believe me, I appreciated that. Nothing like nice man-candy, close to my own age, to look at. But, as the film rolled, I found myself asking, where the heck did the original story go? I mean, I get it. Make it a little sexier, target older teens instead of the 15 year olds and tweenies, then maybe adults would like it too. Here's a hint, adults liked it before Hollywood tinkered with the storyline and we don't have to have the story about eighteen-year-olds, to relate to it and enjoy it. We did fine with Harry.

Even though I'm sadly disappointed Hollywood felt the need to butcher Lore's original work, I find myself chomping at the bit for the next novel, The Power of Six. Because when push comes to shove, Hollywood just wasn't up to the challenge of capturing Four's story. The book rocks, next time, I think I'll pass on the movie and let the author work their imagination on my mind.

It's so much better.

Well, I haven't seen the movie but I did read the book. I enjoyed it for the first two thirds and then didn't. I think it descended back into a book that kids would enjoy better than adults at that point. Up until the arrival of the you-know-whos - I thought it was well done. I liked the backstory and I liked the characters. And I would read the next so that says something. Maybe I'd better avoid the movie!

I saw the movie this weekend, and I enjoyed it, but I had not read the book. Your blog now has me really wanting to, curious to read the difference.

Although, I know going backwards before (movie to book) is not the way to go. I like to read the book first usually.

Well, there's maybe one thing in the movie the same as the book, and it's the opening where number three is killed.

The book is always better than the movie and the Hollywood people are not readers, they're visual artists. It's a shame that their are not enough of them to have the power to say, "Hey, you're changing too much."

I haven't read this book or seen the movie. I'd like to though. :)

Thanks for your take, Dawn. I want to see the movie, being SFR. (There sure have been a run of them lately, haven't there?) I haven't read the book, so hope I can judge the movie on its own merits.

I do wish that Hollywood wouldn't deviate so far from the original plot on book-based movies though. There's a reason the novel was so popular, so why tinker with a winning formula and make it a different story? (That said, I thought Jurassic Park was one huge exception, where both the characters and story line were so much more effective in the movie than in the book.)

Good to know! I just bought the book and plan to see the movie. Will watch the movie without any expectations now.

I haven't seen the movie yet, but I have to go into movies based on books with the mindset that it's going to be two hours of people with very familiar names, in a very familiar setting, doing things that have nothing to do with the original plot. Otherwise, I'm too disappointed in the end.