Oh to pick favorites. I do love a tortured hero. A lot. But we'll get to that in a minute when I talk about one of mine. First, one of my favorite female characters from someone else. 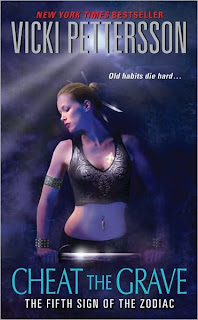 She's the lead character in Vicki Pettersson's Signs of the Zodiac series. If you've never heard of them, they're dark fantasy and combine fantasy, superheroes and paranormal romance--but there isn't always a HEA. It works off the premise there's another world under the neon layer of Sin City (Las Vegas) where Light and Shadow battle. And Joanna is in the middle of it whether she likes it or not. Problems is, Joanna Archer's dead--at least that's what everyone else has to think. Right from the get go, we're shown Joanna has a lot going against her and get to journey with her as she tries to overcome the remains of "her" life. It's a struggle and she isn't always successful. She's not perfect, which is the kind of character I like to read.

Now as far as loving the tortured hero. I love bad boys, too. Anti-heroes. Tall, dark and damn dangerous. I'll take a few please! But, since I have to pick one of mine, I have to go with Wallace Grey, from my Star Runner Saga books. Why? Well, the man slaughtered an entire crew of a spaceship and didn't--and never will--apologize for it. He went to jail, did his time...sorta...but he has absolutely no regrets about it. Not a one. Sure, it's pretty brutal, but if you knew why...can you say puddle at his feet? 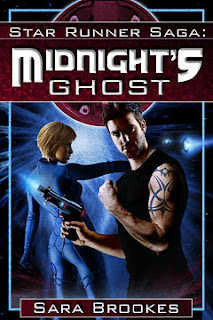 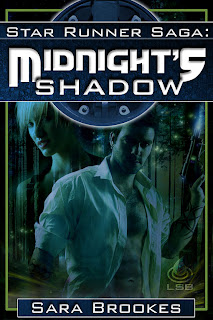 As if that wasn't enough, I just recently finished up work on Midnight's Shadow, the next book in the series and it'll be released later this month. Wallace's problems haven't been solved by any means. In fact, I think they've increased ten fold. Just when I thought he couldn't get more tortured...yeah, poor guy.

*G*
What about ya'll? Do you like 'em tortured, shattered and broken or not? One of my books (your choice!) is up for grabs here this week!
Posted by Sara Brookes at 6:05 AM

OOO...I'm going to have to check out that series! I've never heard of it!!!

Wallace is so sexy!!!

The more tortured the better. But it has to be good tortured, not crazy in the head tortured.

I mention this because I'm reading a split personality hero at the moment and yes, he's tortured, but I'm not connecting.

Annie, I agree. Crazy tortured doesn't work for me either.

I've never heard of this series, Sara. I'll have to check it out.

Annie, I know what you mean. For me, it wasn't so much that Indigo (Shadowglass by Erica Hayes) was crazy. I mean, he was, but he had split personalities. So he was "sound in mind." It just depends on which half of him you encountered...

I think what made SG a more difficult read to identify with was the fairy POV. They're not like us. LOL While it was interesting, I enjoyed Shadowglass more. And Poison Kissed has been the best so far IMO

My friends don't get it.