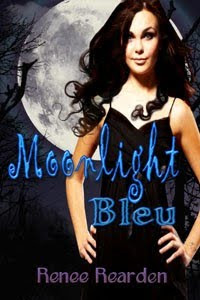 Moonlight Bleu
Author: Renee Rearden
Genre: Urban Fantasy
Publisher: Crescent Moon Press
eBook: $9.99
Print: $14.99
Ebook Buy Link
Print Buy Link
Saari Mitchell sees a psychologist in order to understand why-500 years later-she's still dreaming of her dead lover. Her shrink isn't helping, the nightmares come every time she closes her eyes, and the lack of sleep is interfering with her job at Sacred Heart Hospital. With her psychic ability to heal the human spirit on the fritz, her auric radar becomes as reliable as her spotty cell phone service.

By day, Dhelis Guidry works as a detective for the New Angeles Police Department investigating the missing or murdered women in the Full-Moon Killer case. In his spare time he hunts rogue vampires as a Tueri executioner.

Brogan Vincent is a Tueri healer. Though he could offer his miraculous talents to the rich and powerful, he has chosen anonymity and peace by only using his psychic abilities among the Tueri.

One look into Saari's tri-colored eyes and both men realize she is Tueri. One touch tells them each she's their soul mate. But can either of them protect her from the Full-Moon Killer?
Rating:

Hmmm…this book left me wondering how to review it. If I based my review on the first half I would give it three stars. The jump around in time, the different characters had my head spinning and I had a really hard time following it. I nearly put it down because I was so confused. But, I’m glad I didn’t. Once I got past the first fifty pages or so, I was hooked.
The concept for this story is very original, I’ve never read anything like it before and it even added a little part with cupid. I loved that. There is a ménage element to this story between Saari, Dhelis and Brogan, but don’t expect anything erotic…you won’t find that here, it’s an urban fantasy with romantic elements.
Set in the year 2032, I just loved how New Angeles, Nevada was presented. Right there I knew this was going to be a very in-depth novel. And I wasn’t disappointed. After the little hiccup, I was immediately taken on a compelling adventure while Saari, along with Dhelis and Brogran set out to capture the Full Moon Killer. But it’s more than just a wild mystery, I found real emotion in this story while Saari deals with a recurring dream that plagues her life and she has to juggle not just having one soul mate, but two.
Urban Fantasy readers will love this one!

Nice review, Stacey.
It's a delicate balance, when writing a novel that has flashbacks to the past, as this one does. Slipping the Past is written in this matter. I found the only way to keep my heroine and hero recognizable was to link something similar about them throughout time. Jocelyn Miller's name always started with Jo, Jocasta, Josephine,Joella. For the hero, it was the eyes, I always went back to my anchors so that the reader knew those where the characters in another lifetime. It was definately one of the most challenging stories for me to write and I can bet this was also a challenge for this author.