What’s in a Name? Guest Blog by Shawna Reppert


As a writer, I often find myself struggling with character names.  When you think about it, a name is important— it’s how a reader talks about a character, how they relate to a character.  Sometimes the name pops into my head along with the character— a rare gift.  More often, I’m scrambling through odd sources trying to come up with something that fits.


The protagonist of my short story “The Beast Within” (Gears and Levers 2) owes his first name to an my favorite actor and his last name to one of the dances in the Irish dance class I came home from just before starting the story.  (For the curious, the dance is called “The Humors of Bandon”.)  For my novel, I borrowed James Dupree’s first name from a minor character in a completely unrelated movie and the last name from a Grateful Dead song that has even less to do with the character, the world, and the plot than the movie did.  But when I put them together, they just sounded right.  Having a character with an Anglo-Saxon-origin first name and a French-sounding last name, the remainder of my human characters fell in line with a fairly British-sounding mix of English and French-derived names.


Even in an original world, the names need to feel like they belong together.  They need to make sense, at least on a subconscious level.  I tend to avoid completely made-up names.  They are hard to ‘pronounce’ in the reader’s head and so tend to be jarring.  (This is a general guideline, of course.  Rules are made to be broken.)


I honestly can’t remember where I came up with the name Loren for the other principle character in The Stolen Luck.  But once I was there, I knew I wanted to have the other elves to have names with a similar feel.  I looked up Loren in The Writer’s Digest Character Naming Sourcebook (a great resource for name-challenged writers) and discovered it meant Laurel.  I decided to go with a botanical theme to emphasize the elves’ connection with nature.  One of his cousins became Sil (of the forest) and two others became Ashe and Thorne (The latter two popped in my head from a line in a song about oak, ash and thorn.  You may be noticing a trend here.) Loren’s father became Varen, and admittedly made-up name but one that echoes Vernon (flourishing) and Verne (youthful, for the elves’ eternal youth.)  And yes, that violates my self-imposed guideline against made-up names, but it sounded more pleasant to the ear than either of the source-names, was still easy to pronounce and had a ‘family sound’ when compared to Loren.


Sometimes I chose a name by meaning.  The father of the protagonist in my urban fantasy is Bredon Ravenscroft, ‘Bredon’ meaning ‘sword’.  Though we only meet the man as backstory, he is every bit as dark and dangerous as the name implies.


Other times I go by sound.  From the same urban fantasy, the character Zack is as bold and brassy as his name sounds.


Sometimes the name is integral to the character.  In my current work in progress, a werewolf/steampunk/Victorian detective novel, Royston Jones’s name refelcts the backstory of his birth, his upbringing, and the challenges he faces in his life (hint:  Jones is his mother’s surname and his first name had been his father’s family name.)  In my contemporary fantasy short story  The Sword and the Kestrel (a Writers of the Future Honorable Mention winner available on Amazon as a stand-alone) the protagonist’s name represents his story conflict— Guy Gisbourne, named for a distant ancestor (yes, that Guy Gisbourne)confronts a curse brought down on him by the actions of his namesake.  Even the pseudonym he uses in his work at a Renn Faire (Rob Hunter) has a significance hinted at but not fully realized until the end of the tale.


So what’s in a name? Nothing and everything.  Sometimes the rose by another name might not smell so sweet, at least not in the reader’s imagination. 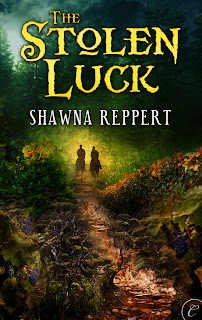 How far will a good man go to save his home and loved ones?

Lord James Dupree must recover his family's stolen Luck, the elven talisman that has protected the Dupree lands for generations. Without the talisman, the Dupree vineyards are failing and creditors are closing in. The Luck is his only hope of saving his home and his family from poverty and ruin.

Despite his abhorrence of slavery, James wins an elven slave in a game of cards. The slave, Loren, provides the only chance to enter the Lands Between and recover the stolen Luck. Despite James's assurances and best intentions, Loren does not trust his new master and James finds it all too easy to slip into the role of slave master when Loren defies him.

As the two work together through hardship and danger, James finds himself falling in love with Loren. And when a hidden enemy moves against them, he must choose between his responsibility to his family and his own soul.


Or directly from the publisher:

Keep in touch with the author: