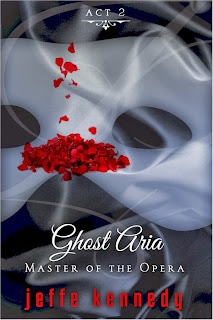 Today just happens to coincide with the release of the second episode of my serial novel, Master of the Opera!

In this installment, Act 2: Ghost Aria, the plot thickens. I actually get to say that for this book, because it's a suspenseful mystery as well. Master of the Opera is a modern retelling of The Phantom of the Opera. Taking place at the famous Santa Fe Opera, the story follows freshly graduated apprentice, Christine, as she encounters the enigmatic "ghost" who haunts the opera house.

If you missed Act 1: Passionate Overture: 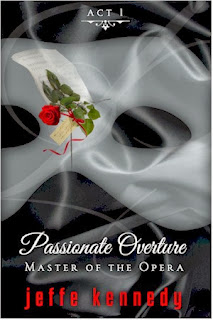 In the first tantalizing installment of Jeffe Kennedy’s ravishing serial novel Master of the Opera, an innocent young woman is initiated into a sensual world of music, mystery, passion–and one man’s private obsession. . .

Fresh out of college, Christine Davis is thrilled to begin a summer internship at the prestigious Sante Fe Opera House. But on her first day, she discovers that her dream job has a dark side. Beneath the theater, a sprawling maze of passageways are rumored to be haunted. Ghostly music echoes through the halls at night. And Christy’s predecessor has mysteriously disappeared. Luckily, Christy finds a friend and admirer in Roman Sanclaro, the theater’s wealthy and handsome patron. He convinces her there’s nothing to fear–until she hears the phantom’s voice for herself. Echoing in the labrynths. Singing of a lost love. Whispering her name: Christine.

At first, Christy thinks she’s hearing things. But when a tall masked man steps out of the shadows–and into her arms–she knows he’s not a phantom of her imagination. He is the master of her desire. . .

In the second seductive installment of Jeffe Kennedy’s thrilling Master of the Opera, a young woman falls deeper under the spell of the man who haunts her dreams, fuels her desire, and demands her surrender. . .

With each passing day of her internship at the Sante Fe Opera House, Christine Davis discovers something new, something exciting–and something frightening. Hidden in the twisting labrynths beneath the theater is a mysterious man in a mask who, Christy’s convinced, is as real as the rose he left on her desk–and as passionate as the kiss that burns on her lips. He tells her to call him “Master,” and Christy can’t deny him. But when her predecessor–a missing intern–is found dead, Christy wonders if she’s playing with fire. . .

Candlelight, golden and gentle, greeted her when she woke.

She shifted, the glide of warm velvet under her cheek, the brush of a soft fur blanket covering her. So peaceful and cozy. Her lashes looked like black lace against the warm light. Sighing, she snuggled in, drowsy and peaceful.

With a bolt of panic, she sat up, the throw falling away, and tried to absorb her surroundings.

It was something out of a dream.

She sat on an antique chaise, sort of a carved wooden fainting couch, covered in emerald velvet with throw pillows in satin jewel tones. The fur blanket felt real, soft as chinchilla, in a dazzling light pearly gray, nearly a luminescent silver. The rest of the room held similar furniture, an eclectic assortment of Victorian-style lines and fabrics, breathtakingly elegant. Plush Oriental carpets easily worth tens of thousands of dollars covered the floor, one bordering another in a stained-glass pattern of color.

On every surface, white pillar candles glowed, their flames straight and true in the draftless cavern. For a cave it was, rough rock walls a disconcerting backdrop for the lovely pieces. As if she were some sort of exotic animal, displayed in a zoo habitat created by some well-meaning but misguided keeper—who couldn’t disguise the impression that the abandoned lion’s den of rocks and crags had been hastily converted just for her.

Little doubt who her captor might be. Or that Tara’s fate might yet be in store for her.

The stark terror she’d felt in the prop shop had chilled now, coating her insides with a fine frost. Her mind felt crystal clear, sharp and incisive. Some part of her recognized this as an adrenaline high. This was the state that allowed mothers to lift cars off their children or soldiers to continue fighting with fatal injuries.

If escape wasn’t an option, she would fight. Laura Moon’s daughter wouldn’t go down without one.

Resolved, she explored the room. Most of the furniture sat at least an arm’s length from the cave walls, which allowed her to walk behind the credenzas, desks, and settees, even the tall bookshelves. Though the candles didn’t provide much penetrating light, her investigations showed no doors, no tunnels, not even a mouse hole.

She circumnavigated the room twice. Then a third time, just to be sure. The only egress appeared to be the chimney. The fireplace seemed to have been dug out of the wall, large enough to stand in and deeply inset. Behind a gleaming brass screen, logs burned with fierce heat, any smoke whisked up the chimney. No telling how high it might be.

She’d been ready for this, so she didn’t startle. Instead, she reached for the fireplace poker and slowly turned to face her captor.

He’d apparently dressed for the occasion, the black cloak swept back to frame his broad shoulders, clothed in a billowing white shirt with poet’s sleeves, a waistcoat of swirling gold brocade fitted to his narrow waist. The black half mask obscured his face but not his ice-blue eyes or his sleekly groomed white-blond hair.

In his gloved hands, he carried a tray with a crystal carafe and a plate of some sort of food. His gaze touched on the poker and moved back up to her eyes, his sharp-edged lips curving. “Does the fire need stirring?”

“You think I won’t use it, but I will.” Her voice sounded even and confident. “You’re not raping me without losing some important soft bits, mark my words.” She eyed his crotch significantly, which was maybe a mistake because the tight fit of his black trousers left little to the imagination.

“I won’t be raping you at all. I told you before, I have no wish to frighten you.”

“Breaking news—kidnapping and imprisoning someone is frightening to them.”

“I did not kidnap you. You fainted in my arms. I could hardly leave you alone in the hallway.”

“Then I can leave whenever I wish?”

“That is always within your power, if you truly want it.”

“Like Dorothy, I only have to click my heels and wish to be home?” She snickered. “That’s hardly a realistic answer.”

He shrugged, the liquid in the carafe sloshing. “What is real?”

She flexed her fingers on the poker. It felt solid. The fire warmed her skin. But her dreams had felt this vivid, too. “I don’t think I know anymore,” she replied, finally.

His lips curved. “I receive little company, so I would love for you to stay and continue to talk with me for a while.”

“Yes. A clever woman like you should recognize a conversation when she’s in one.” He turned away and set the tray on a low table of glossy wood with frivolous legs that ended in dainty carved hooves.
She lifted the poker. With his back turned, she could strike him over the head. Quick and clean.

“Don’t.” He said it softly, with stern command, never looking at her. He poured the blood-red liquid from the carafe into a glass and brought it to her. “If you try to attack me, I will tie your hands. I’d prefer you to accept my ropes under other circumstances.”

Jeffe Kennedy is an award-winning author with a writing career that spans decades. Her works include non-fiction, poetry, short fiction, and novels. She has been a Ucross Foundation Fellow, received the Wyoming Arts Council Fellowship for Poetry, and was awarded a Frank Nelson Doubleday Memorial Award. Her essays have appeared in many publications, including Redbook.

Jeffe can be found online at her website: JeffeKennedy.com, every Sunday at the popular Word Whores blog, on Facebook, and pretty much constantly on Twitter @jeffekennedy. She is represented by Pam van Hylckama Vlieg of Foreword Literary.
Posted by Jeffe Kennedy at 7:00 AM