I'm afflicted with Holiday Blues. Quiet days at home are what I crave. Heck, I leave work Monday and don’t go out again until Saturday when I return to work. Occasionally my sister drags me out or a variety of appointments I can’t get out of force me into the world. This time of year I try even harder not to leave my safe, warm, abode. Doesn’t help that I abhor winter weather – any weather below 70 degrees is brutal! So why a holiday story you might ask? Gosh knows. Maybe it’s because I’d put this one out a few years ago and never quite ‘felt it’ so I enhanced the story by adding close to a thousand words, and I’m setting it free once again this week after a few more fixes! Here’s a bit of my interracial male/male/female ménage: 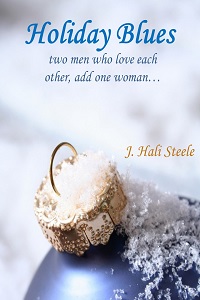 Pennington Seevers picked the same all-inclusive island get-away the very woman he wants to escape also chose. Partner, best friend, and lover, Rory Burton, is along for the trip and though they enjoy sex together, even love each other, Rory insists Pennington is more than attracted to Headley Etta Xavier and accuses him of not wanting to share as they often did.


Headley Etta Xavier who goes by the name Hex knows involving herself with her boss, Pennington, or his second in command, Rory, might mean an end to her job so she takes her first vacation in years hoping to wipe both from her mind. Little does she realize the men she watches having sex from a hidden spot behind a tree is Penn and Rory. Worse yet, seeing them in the act didn’t deter Hex, it made her hotter than hell!


A holiday to remember or a case of holiday blues—which way would it go?

“It’s been so long I barely remember but I’d bet you can’t describe the last woman we shared.”


“Yeah, right, and I’d wager again this sudden thing you’ve developed for tall, skinny blondes is so you don’t think of Hex when you screw them.”


Rory said, “Tell her.” The lopsided grin Penn loved appeared. “The worse that could happen is one of us gets lucky.”


“Christ, Penn, I don’t get you sometimes.” Rory tipped his beer, finished the bottle. “You don’t laugh anymore, we don’t go out, and you’re rude as hell all the time. You need to pull it together.”


He gazed at his friend. They’d known each other forever, Penn loved the man. Rory didn’t know how close he was to the truth about his feelings for Hex. He watched her at work, Penn liked how meticulously she handled her job, how she smiled, how she walked, how her brown skin glistened under lights... Fuck me! He couldn’t find a single thing to fault her on. Hell, he searched hard for errors to have a reason to call her into his office. He found none. And the way she dressed, God, she was stunning in those fitting outfits that hugged her round ass. How could he be so attracted to Hex but not want to give up what he had with his best friend?


Hex rejected his advances so many times, he stayed angry at the world and it was wrong. “With the others, I could share them, it was sex and we all got what we wanted. Anyway, what they thought didn’t matter. I always knew I could continue to have you.”


Rory was right about why he chose thin blondes—they kept thoughts of Hex from invading his head. “I almost told her, Rory. If she had agreed to go out with me again, I would because I didn’t want a lie between us.”


A hand waved in Rory’s direction, “She may not have understood us.” Penn shook his head. “Hell, I’ve never felt this way about anyone but you and I’ve only kissed her.” He didn’t take his eyes off Rory. “Though we’ve shared men and women, I’m possessive as hell when it comes to you.” He glanced away not wanting Rory to see anger flushing his face. “I remember the guy you brought up in conversation earlier. We enjoyed him together but when he tried to take you from me, I wanted to do more than punch him out.”


“I knew you remembered.”


“Thinking of you feeling this way about someone… Jesus!” His head bowed. “What if I couldn’t have shared Hex?”


“Fuck that, Rory, because I don’t. I don’t get this at all.” Penn appreciated the fact only one lamp cast light from the far corner because he would rather not ruin Rory’s holiday by having him witness raw emotion surfacing at this moment. What the hell! He leaned forward on the sofa, elbows on knees, and buried his face in his hands. “Every night, every goddamn day. I can’t get her out of my mind. I liked being with her, we talked, laughed, touched, and she didn’t expect anything from me. I’d have taken her to one of those godawful girly movies if she asked. Christ, Rory.” Air whooshed from his mouth. “I won’t… I can’t give up what you and I have.”


He jerked around and stared at Rory. “What the hell does that mean?” Would Rory disappear from his life if he found a woman and wanted to settle down? “What would you do?”


Rory got up, walked a few steps to where he sat, and pulled Penn’s hands into his. “I don’t want another man, you’re enough for me. But we’ve talked about women, doing different things with them, and I’m more than aware you want to start a family, have children. You’ve never hid that from me. I don’t want kids but it’s been my dream we’d find one woman we could spend the rest of our lives with.” Penn pulled his hands back and rubbed his face. “Look at me.” Rory continued, “I’m not searching but if I found one and she didn’t understand what you and I have together, she won’t be in my life. Period.”


Penn stood and embraced Rory. “Then there’s your answer why Hex can never know, why I can’t make her a part of my, our life."

Keep your eyes open for more information on release date.

Growl and roar-it’s okay to let the beast out. – J. Hali Steele
Posted by J Hali Steele at 4:00 AM

I know what you mean about not wanting to go out in the winter. I like hibernating. Holidays are hard on a lot of people. I'll bet Hex got a real surprise when the guys showed up. :) Sounds like it could be a fun situation.