The Things That Get Us Through the Year by Jane Kindred

It’s that little souvenir, of a terrible year
Which makes my eyes feel sore
And who ever would've thought, the books that you brought
Were all I loved you for
— The Sundays, “Here’s Where the Story Ends”


Normally, I’m all about the holiday spirit this time of year. I’m an atheist with pagan leanings, and I adore all things Yuletide. This year, however, putting up the tree was an act of faith—as it is every year—that after the darkness, the light will return. But this symbolism has never resonated with me quite so much as it does right now, at the end of this terrible year, in which “to 2016” has become an insidious verb.

The unexpected death of David Bowie on January 10 hit me hard, and then my personal year got off to a rocky start with the announcement that my publisher was closing its doors. In addition to uncertainty about the fate of my current titles, it meant the cancellation of a book whose characters I'd grown deeply attached to. That loss, coupled with some reviews that shook my faith in my writing, plunged me into a deep depression.

Then, in April, Prince’s tragic death hit me even harder than Bowie’s had. Both were major influences on me growing up, helping me to take pride in being different, accepting that who I was didn’t have to be who I’d been raised to be. But Prince had helped me define my individuality in countless ways, letting me take the first baby steps away from my fundamentalist Evangelical upbringing when I wasn’t quite ready to let go of my beliefs even though they no longer rang true. The loss of that icon—and that music that had been the soundtrack of my teenage years—made me feel like a little bit of my youth had been irrevocably lost as well.

But there has been a little light among all the darkness. In April, the first two books of my Sisters in Sin series sold to Harlequin Nocturne. And it’s those little glimmers of light that keep writers going when the world seems to be turning against them. Writing is what carries us out of the darkness.

The first book in the series, Waking the Serpent, was released yesterday, and the second, Bewitching the Dragon, comes out in May. I started writing Bewitching right after Prince’s death, and the first draft of that book included my main character reflecting on how his music had given her strength as a young woman. Like me, she had struggled to reconcile the beliefs of her youth with her changing views as she came of age. But I’m getting ahead of myself. Book 1 is about Phoebe, the sister who embraced her magic and never looked back, and Rafe, the living embodiment of Quetzalcoatl.

If you like magic—and hot dragon shifters—with a healthy dose of sin, perhaps the Sisters will do for you what they did for me and help you get through these dark times. 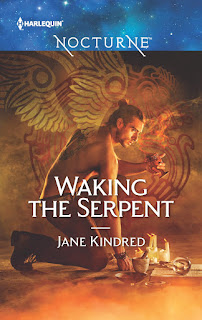 Waking the Serpent is available now in ebook and mass market paperback at the following retailers:

Jane, both Bowie and Prince played a big part in my growing up! Loved this post and the memories it evoked.

2016 has indeed been rough. Hoping for so much better from 2017.
Your books sound terrific - wishing you all the best! :)

Wonderful post! It sounds like your year is coming around, and I hope 2017 is spectacular. Losing some huge music icons this year was sad. I still have a hard time believing Prince is gone. He was my idol growing up and I adore his music. Such a tragedy. Congrats on your new books!

Sorry the year has been so hard on you. Glad you found some bright spots. So much negativity this year it can only get better in the next...

Sorry to be late in posting. I agree 2016 has been a difficult year--esp. on the global scale. I'm so glad you've found glimpses of light. Our writing can be cathartic (for us as well as our readers). It can also help us work our way through difficult times. Here's to a better 2017.