NANO AND YOUR SERIES by Marie Dry @MarieDry1

We're happy to introduce our guest, Marie Dry. She's here to talk about her experience with NaNoWriMo (National Novel Writing Month, known to the rest of us as November).


NaNo and Your Series

Every year during NANO life seems to happen and I end up barely making my 50k. Then on top of that, when I start editing I have to cut more than half of the story and rewrite almost everything. I’ve heard many authors complain about this.

This year something strange happened. In spite of life happening i.e. two French tests, a crazy busy time at the office and family responsibilities, I made 80k easily this year. It felt as if I barely had to put in any effort to reach 50k and before I knew it I had 80k.

I believe the one reason is that long before my first book was accepted by Black Opal Books I wrote minimum three hours every day. Whenever the successful authors give advice on writing that is the one advice all of them give. Write every day and write with discipline. I followed it religiously and it seems to be paying off. My writing muscles have strengthened.

Before NANO started I went on the forum for Pretoria (South Africa) and asked if there were people near me who wanted to do write-ins. We got together once a week close to my place and it was wonderful. I also joined an online sprinting group that was created for NANO. Waving at the NANOWRIMOERS facebook group!

The one major difference I made with the writing was I decided to not be so focused on the 50k but instead to try and write a tighter novel. Not easy to do for a pantser like me. The moment I decided to focus on the story and not the word count it took a lot of pressure off.

If I had to choose one decision I made this year that allowed me to reach 80K in a month while working full time, it is to work on more than one book. Instead of writing words for the sake of the word count, if I ran into trouble with one book I worked on the next one until my mind figured out the problem. It worked! I now have the rough draft for Alien Resistance, an even rougher and shorter draft for Alien Captured, a good bit of Alien Ruled and the outline for a novella for Alien Rescue.

The support from other writers during NANO is amazing and it has made a huge difference to me. When I joined RWA Australia in 2010, I did online sprints with them and it was the first time I ever sprinted and had company in my writing. It was wonderful. I lived in Spain at the time and it was hot and I remember all of us buying flakes (a brand of chocolate) in our respective countries and putting them in the fridge as a reward for after the sprints. I still like cold flakes because it reminds me of that year. That is also when I finished Alien Mine and yip, I had to rewrite the whole book because I was so focused on word count I didn’t pay attention to the structure of the book.

What I’m trying to say in a very convoluted fashion, is that NANO is wonderful, but if you want to walk away with a book you can sell it is better to have a strategy. My strategy of not even thinking about the word count this year paid off. Maybe it will for someone else as well.

For anyone looking for craft books here is a list of the books that I went through this year before NANO. There are many more but these are my current favourites.

Below is the blurb and a short excerpt of Alien Under Cover, the second book in my Zyrgin Warriors series. Enjoy. 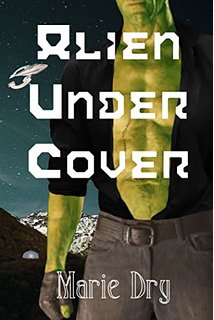 BLURB
In a bleak and apocalyptic future, Julia Benzoni flees the violence-saturated world of her mafia family to build a peaceful life in a No Name Town, Montana. Now, while civilization disintegrates into anarchy around her and evil men prey on the innocent, she’s pursued by an alien, whose warrior life thrusts her back into the world where might makes right and violence is the order of the day. Torn, she now has to choose between her need to distance herself from war and violence and the alien warrior who holds her heart.

The first time he revealed himself to his breeder she fainted.
Zurian caught her before she hit the floor. Left with a beautiful human woman helpless in his arms, he’d laid her down on her bed, covered her with blankets, and left her alone. It had taken a surprising amount of willpower to let her out of his arms.
He was not a warrior known for his mercy. He’d killed and executed many and, for a long moment, while he stood there staring at her soft human face, he’d been tempted to take her to his dwelling despite the fact that she was too small and delicate for life with a Zyrgin. Not taking her as his breeder so he wouldn’t break such a fragile woman had been an act of mercy from a warrior considered the most pitiless in the empire.
In the end he could not stay away from her and, when he revealed himself to her the second time his faith had been rewarded. She’d tried to shoot him. Julia handled the pistol well and, instead of crying when she couldn’t manage to hit him, she was furious. His Julia knew some words his translator did not have the meaning of.
He returned a third and fourth time, cloaked, curious to know more about her. Since then he’d gone to her many times. Sometimes cloaked, sometimes not. She intrigued him with her strange habits. She spent most of her time on the human communication device they called a TC, which seemed to be her means of earning a living. She liked to paint her tiny claws—nails he reminded himself, humans called them nails—many colors. Women on Zyrgin frequently adorned themselves but since no warrior with honor would look at another warrior’s breeder he’d only been vaguely aware of perfumes and lavish clothes during ceremonies.
He thought about her when he should be concentrating on his warrior duties. Curious to see what she would try next, he returned to her impoverished dwelling. She was clever enough to stay out of grabbing range. Sometimes he played with her, pretending he only moved at human speed. Countering her attacks, he grabbed her and enjoyed the feeling of her skin, of her body held briefly against him while she fought and squirmed. Once, she tried to knee him in the groin. Seemingly convinced she could harm him that way. He’d observed some of the women in the raider camps, the ones who were not broken, use that tactic with great success on human males.
It had been a week since he’d seen his golden human. At the back of her small house, in the settlement the human’s called No Name Town, Zurian stepped forward and stopped, his boot lifted. A thin white powder covered the door entrance. Something gleamed on the windowsill and, as he moved to the side, more of it gleamed at the bottom on each window ledge. He pinched a tiny amount of the white powder and tasted it. Salt, the spice the humans put in everything. It had to be one of her curious tricks to try to keep him out.
The first four chapters of my books are available on my website. www.mariedry.com

Ever since she can remember Marie Dry wanted to travel. She had had the privilege of living in Zambia, Morocco, and Spain and sees herself as a bit of a gypsy. Every few years she gets restless and has to be some place new.

She read romances since she was nine and was fairly young when she decided she would write the perfect story that had all the elements she looked for in a romance. In 1997 she decided to go all out with her writing and to get published. Being published by Black Opal Books is a dream come true for her.

There are several wonderful moments in her life that she would never trade for anything. One of them is meeting President Nelson Mandela and the second being published. Her Book Alien Mine was released by Black Opal Books in June 2014.

Welcome, Marie. What an accomplishment. How wonderful you found what works for you. Congratulations. The books you mentioned are super, esp. Dixon's, Swain's, Maas', and King's. Very helpful.

Thanks Diane, on top of the books I recommended I can add any course by Mary Buckham. She have a talent for getting the message across. I've ordered The writers Journey by Christopher Vogler and can't wait for it to arrive.

Lots of admiration (and awe) for those who achieve this difficult feat! Best wishes for continued success.

Welcome, Marie! That is so impressive that you wrote 80,000 words in a month. Way to go! I've tried to write two different books at once, but it didn't work for me. :)

Welcome Marie! Wow, what an impressive word count! That is fantastic! I enjoyed the excerpt.

Congratulations on all your hard work!

Thanks CJ. My brain seem to work that way though I make sure I always prioritize one book.

Thanks Maureen. I laughed out loud at the aliens during a few of the write ins.

Thanks Debra. Its a great feeling.

I met a lot of hardworking and enthusiastic authors this November. I hope they all get to publish wonderful stories.

80K is a fantastic achievement. Sprints and goals shared make a huge difference to my achievements. I look forward to seeing the results of the 80K.

My goal is simply to DO NANO one year LOL

Thanks. Looking forward to reading your next grave robber book.

Thanks Pamela. Im doing camp nano in june and you can always join me. Sprinting together helps a lot.

I'm so sorry I didn't make it by yesterday. Excellent post! I might give your two book thing a try. My brain is constantly working on more than one book, my fingers might as well be. ;) I'm so impressed you wrote an 80k book in a month. I definitely need more discipline. Your series sounds great...best wishes!

Congrats, Marie!! 99% of succeeding is showing up every day! Great post. Thanks for visiting with us.

Thanks for the share, Marie! Congrats on the fantastic word count, without even counting! This was my first year with NaNo and I won the word count, but I see what you mean about the revisions and cutting. I'm in that stage now. I will keep your advice in mind next year!

Alicia it works for me thougb I am careful not to allow it to become a procastination tool. I set deadlinez for myself and keep it.

Thanks Nancy. I loved hanging out here and chatting. I do believe in the 99% hard work and 1 percent talent idea.

Congratulations on your first win. I hope its one of many. What got me was thinking I have a rough draft and then reading it after a month and realizing that it cant even be called an outline.