Do you have a friend who is a writer? If you do, then perhaps you're familiar with what I'll be talking about here. If you're a writer yourself, you may not have noticed these strange traits in yourself or maybe you don't have them, some writers don't. These strange folk (writers) come in many different variations. If you're a writer, perhaps you haven't noticed them because you were lost in the corridors of your mind at the time and failed to notice.

Maybe you've been engaged in conversation with a writer or he/she is among a group of friends participating in a conversation. Suddenly the writer drops out of the discussion and gets a faraway look in his/her eyes. Don't be alarmed or think that person is intentionally being impolite, nor has anything gone wrong. Something has occurred during the conversation, a word, a picture, a sound, that has triggered them to retreat into his/her inner thoughts.

Maybe elaborate scenes for their current work in progress are flashing in their minds, or maybe one of more of their characters are shouting out to be heard. Maybe the characters are suggesting situations to put them in or introducing (groan) other characters to crowd into the corridors of their mind. So many things. Talk about being insane. (grin) Imagine, if you can, having multiple personalities running amok in your mind and as more of your stories are created, the number of personalities inside you explodes. It soon becomes very crowded in there. Don't be concerned, a strait jacket is not called for, most authors are too busy plotting and performing things in their fantasy worlds to do anything dastardly in the real world.

Furthermore, don't be alarmed, he/she will come back to the present in due time. He/she is just being a crazy writer. Always remember, anything he/she sees, or hears, may well become part of the story. Writing inspiration comes from too many sources to count.

If you like the writer's stories, just remember, posting a review on Amazon or wherever you found his/her book, is the best way to tell them you appreciate their effort to entertain you and encourage them to write more. 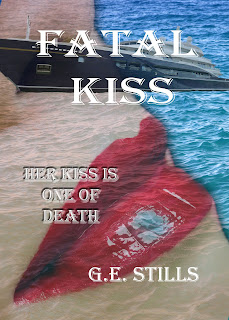 Small town raised with conservative values, Janelle has recently graduated from college. Her job search has been fruitless so far and she is facing mounting debt along with pending eviction from her apartment. When she finally receives a job offer, it is both unbelievable and disturbing. The offer requires her to cruise the world on a fabulous yacht for a year with all expenses paid. It also requires her to sell herself for that year in a Master, slave, relationship. The wages she will receive are beyond her wildest dreams, over a million K for the year. Will Janelle accept the offer or turn it down because of her conservative values?
available at Amazon.com

Posted by Author GE Stills at 4:00 AM

Author GE Stills
Normally zany and often naughty talking, G. E. has a serious and compassionate side if you can find it. He cares deeply for his friends and hasn't met an animal yet he didn't like. He is terrified of heights so hasn't braved the tramway ride in his home town. He lives in the southwest while longing to live by the sea. He often says, "We have the sandy beaches but where is the water?" G.E. Stills heeds the call of the many characters that pop into his mind and demand to have their stories written. Their tales are both serious and humorous. A multi-published author, his stories cover many genres including contemporary romance, paranormal romance and science fiction. His stories are both erotic and non-erotic in nature. my web page is http://www.gestills.weebly.com my Facebook author page is https://www.facebook.com/AuthorGEStills?ref=bookmarks my amazon author page is http://amzn.com/e/B007FRP90M Google + https://plus.google.com/u/0/+GaryStillman Twitter https://twitter.com/G_E_Stills

Yes, I agree, we writers can be curious folk. Good tips for our friends and family!

Ditto what Maureen & CJ said. I've had friends ask where I went. LOL Your story is quite intriguing. Best wishes.

Funny, I didn't realize that was curious behavior. Oh, wait, I'm a writer. To me it's just normal... LOL!