Come check out the Reluctant Grooms!! 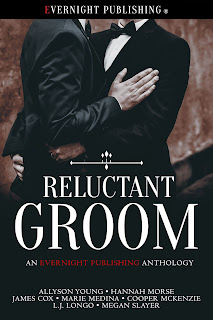 He’s older, wiser, and always gets what he wants. This wedding is happening ... whether the groom likes it or not.

Our seven hand-picked stories feature young reluctant grooms and the older men determined to claim them. These forced marriages may start out frigid, but our authors will prove that love can conquer all.

Evernight's Reluctant Groom anthology stories are sure to deliver passion that is off the charts, scorching hot sex, and sigh-worthy happy ever afters.

Worth the Risk by Allyson Young

Sins of the Father Hannah Morse

Room With a View by James Cox

Making It Real by Marie Medina

Not So Sham Wedding by Megan Slayer

Lucas hated hearing Hudson fight with his sisters. The girls might be younger than him, but they treated him like their junior. Hud was brilliant and good at business. When he made decisions, his choices tended to pay off well.

The concept of marriage, even one entered under duress, seemed far-fetched. He and Hud worked together. They were partners in business, and he considered Hud his best friend, but to marry him…

“She’s so blunt.” Hudson shoved his hands into his pockets. “What does she know?”

“She thinks she knows what’s best for you,” Lucas said. “Hud, she might be right.”

“I’m your assistant, and I’m not good husband material.” He barely kept his two houseplants alive. How in the hell would he handle a real relationship? He spent too much time with Hudson at the office and traveling for business.

“Doesn’t matter. We’re going to Vegas tonight.” Hudson paced the length of the outer office. “No, isn’t Rebeka an ordained minister?” He shook his head. “No, we’ll go to Vegas. It’s faster and we can move forward without having the disaster of doing this at the last minute.” He stopped. “Call Rebeka just in case it’s faster to do it here in the office.”

Lucas had grown used to Hudson’s unique method for handling issues. He talked them out until he came to the proper conclusion. The best thing for Lucas to do was trust his boss. He stared at Hudson for another moment.

Hudson had been the feature of his naughty dreams since the night they met. He loved a man who dressed well and had confidence. That and his dark eyes and dazzling smile, he warmed Lucas all over. He’d seen Hudson naked a couple of times and knew he didn’t disappoint. Besides, he’d harbored a secret fantasy of being stretched across Hudson’s desk while Hudson pumped into him.

Lucas picked up the phone and dialed Rebeka’s number. After four rings, she answered.

“This is Ms. Wederspoon. How may I help you?”

“Hi, Rebeka. This is Lucas Cole. Can you come up to Mr. Granger’s office as soon as possible?” Lucas asked. “We have a question for you.” We … it sounded so strange, but oddly right.

Posted by Wendi Zwaduk and Megan Slayer at 4:08 PM