Action versus Romance by Marie Treanor

Hello! And thank you to Annie and the Paranormal Romantics for having me back! It’s a great time for me, actually because I could use your advice J.
I’m wrestling with a new story, a vampire romance, and it struck me that I hadn’t quite got the balance right between romance and action. We’re all in it for the romance, obviously, but the action scenes are important too, developing a character by showing how he or she copes in a fight or a chase or some other tense situation. These sections can also be sexy in their own way, depending on the interaction of the characters or the description of the movements etc. They add variety, depth and move the story along in lots of different ways. But it struck me that too many of them can get in the way of the romance, while too few can slow everything down too far. Then again, fights should be realistic – even when you’re talking about vampires and other mythical creatures! – yet I for one don’t like being grossed out by graphic violence.
Naturally, much depends on the storyline and the characters, but I wanted to ask your opinion: as a rough, general guide, how much action do you like in your paranormal romance? And how graphic should it be for you? Also, do you like your heroine to fight too? Or to be rescued by her hero?
To help you decide, I’ve got an excerpt below from my latest release – BLOOD SIN, the second in my vampire romance trilogy Awakened by Blood. It’s an action scene, with my heroine leading the fight against impossible odds J. 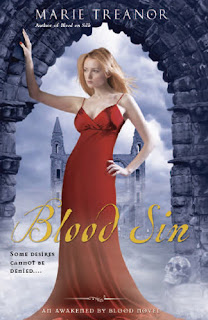 BLOOD SIN: Awakened by Blood 2
By MARIE TREANOR
NAL - Signet Eclipse
Available now from Amazon:
Even if you walk in the light, you can dwell in the dark.
Months after her dangerous encounter with vampire overlord Saloman, Scottish academic Elizabeth Silk is still trying to cope with both the demands of her ancestral bloodline—which marks her as a vampire hunter — and the overpowering desire she feels for the immortal she brought back from the grave. But she is not alone in her fascination with Saloman.
When Elizabeth tracks down a distant cousin from America, she learns he possesses an antique sword that has caught the interest of the Grand Master of the American hunters. It is the ancient and mystical sword of Saloman — a treasure of vast occult powers and a prize beyond measure to both vampires and humans. Now the race is on for possession of the sword.
Even as her enemies and allies shift their allegiances and battle for supremacy, Elizabeth must decide which will rule her own perilous fate: unwanted loyalty or unholy love.
*
“My,” Travis said, moving around the table toward them. “My, oh, my. What do we have here?” He sniffed the air around them, and Elizabeth was suddenly reminded of her first encounter with the Hungarian vampire Zoltán, who had behaved in much the same manner and then laughed, as if he’d recognized her by the very smell of her blood. Although Travis didn’t laugh, there was no doubt of his recognition.
“Powerful human blood,” he observed, his mouth so close to Elizabeth’s ear that she wanted to scream. She held herself rigid, unmoving. “Elizabeth Silk, the Awakener . . .”
Josh yanked her away from him, staring down his nose at the vampire, who paid him no attention whatsoever.
“Okay, boys,” Travis said. “Two descendants to play with, and the victim was Saloman, so no gulping. Share the boy and hold the Awakener for me.”
Josh, who seemed to have finally picked up that the “men” surrounding them were dangerous, took a step backward. Before he could draw too much attention, Elizabeth glared at the vampire who grasped her arm.
“Gulping?” she said. “Without an introduction, I don’t even allow biting.” And she whipped out the stake, plunging it into his heart. At the same time, she spun in the cloud of his dust and kicked the vampire nearest Josh hard enough to knock him into the table. “Josh, run!” she yelled, and lunged at Dante, grabbing his wrist and yanking him after her. “Go!”
It was desperate; it probably required a miracle to make it work; but at least its suddenness gave them a chance. Unfortunately, Elizabeth had reckoned without Josh’s recent skepticism, which she’d just blown sky-high with the vampire. He stood rooted to the spot, blinking at where the creature had last stood. His lips moved, making no sound.
“Get them,” Travis snarled. Elizabeth gave Dante one last tug after her to make her point and grabbed Josh’s arm instead. She couldn’t drag both of them and fight at the same time.
“Josh!” she cried. “Move!”
He stumbled in her wake, but she had to punch the vampire who had hold of him and dragged him to the ground. As Elizabeth leapt and staked the fallen vampire, she could see that their moment had passed. The vampires were closing in on all sides. More were emerging from the office beyond, from the doorway to the car park. Wildly, she scanned the room for an escape route, holding fast to Josh’s arm. He was breathing like a steam engine. Dante backed away toward Travis, who, however, ignored him. The vampire leader’s attention was all on Elizabeth.
“Sir, do we have an agreement?” Dante shouted.
“Not now, Senator.” Travis smiled and walked forward into the circle. “It’s feeding time.”
Dante strode the length of the room toward the exit, and began to run, shoving past the vampires who were not remotely interested in him when the blood of two descendants, one of whom was also the Awakener, was up for grabs.
“I’ll fight, Josh,” Elizabeth said shakily. “But I can’t win. If you can manage it, get out—they want me more. Find Adam Simon and tell him what happened here. Do you understand?”
There was no time for any reply. The vampires approached, beginning at a walk and advancing quickly to a run. Elizabeth raised her stake and released Josh in order to have both arms free.
“Straight ahead,” she breathed, and launched herself at the first vampire with a scream of pure rage.
But something was louder than her cry—the crashing of falling masonry as the ceiling began to cave in. Her chosen victim’s distraction gave her an easy kill. Whirling, she spun to face the vampires closing behind her, and found their backs to her. They were watching in stunned amazement as someone fell—no, stepped—through the hole in the ceiling as if descending a staircase.
He still wore the business suit, minus the constricting jacket. From his long, loose black hair to his shining shoes, he was dazzling. He advanced on those who stood between him and Elizabeth and Josh.
“I’m Saloman.”
Marie Treanor lives in Scotland with her eccentric husband and three much-too-smart children. Having grown bored with city life, she resides these days in a picturesque village by the sea where she is lucky enough to enjoy herself avoiding housework and writing sensual stories of paranormal romance and fantasy.
Website: www.MarieTreanor.com.
Connect on Facebook: http://www.facebook.com/pages/Marie-Treanor-Paranormal-Romance/105866982782360
Join the party on her new blog, Marie Treanor’s Romantic Theme Party: http://romanticthemeparty.blogspot.com/
Buy Blood Sin (Awakened by Blood 2) at Amazon
Buy Blood on Silk (Awakened by Blood 1) at Amazon 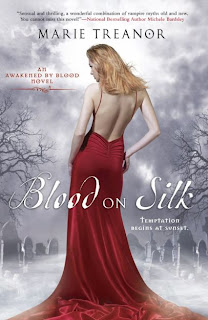 Welcome to PR! I write Urban Fantasy Romance so my books are filled with graphic violence, both from the hero and the heroine, plus the romance bits. So, I'm all for it! LOL! Danger adds fun in my eyes!

These look excellent! I'll be adding them to my TBR list! :D

Welcome back, Marie. I think violence and urban fantasy/paranormal go hand in hand. :)

Thanks for the welcome, Stacey and Annie! (And sorry for the slightly delayed resposne - yesterday was crazy!).

And thanks for your insights too. I do agree you have to have some serious butt-kicking in urban fantasy - I love that as well :).

Thanks for adding my books to your list, Stacey - I'm flattered!

Great excerpt, and such beautiful covers. Congrats on your releases and upcoming third!