Everyone dreams of a place they can feel safe and protected. A private nook where they can be themselves. Where wishes and dreams are built. A sanctuary.

2.         a (1) :  a place of refuge and protection (2) :  a refuge for wildlife where predators are controlled and hunting is illegal
b :  the immunity from law attached to a sanctuary

In Tethered, my first Zodiac Shifters novella, I created the town of Willows Haven. A sanctuary for all the magical creatures inhabiting on East Coast which is protected from humans and anyone with intent to harm.

The town butts against the imaginary Gracelynne Shroud State Park with its large lake. Along the water’s edge, five willow trees along with their guardians provide the power for the protection spell that keeps away those with malicious intent from the town.

I adapted this from my own sanctuary. The neighborhood I live in is next to a city park. It’s a great place to walk, let the kids play or take in nature.  I wanted my paranormal characters in Willows Haven to have the same experience. Only on a larger scale, including a bubble of protection that I can’t wrap my kids in.

Aside from the lake, another attraction of the town will be the Cherries and Berries Diner. I wanted something like the old 1950s diners, but a lot of the interior inspiration came from the Normal Diner which I found in an online search. Situated in one of the downtown buildings, everyone stops by the Cherries and Berries diner at some point for some great food, gossip and pie or cobbler.

Nothing makes you feel safer than being surrounded by food and friends. 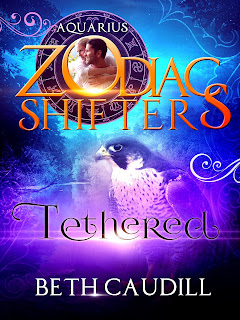 Evelyn Brooks lives with the freedom only her kind can know—in her human form as a photographer, and in the skies as a falcon. When a stalker drives her from her home, Evelyn discovers a beautiful, wild sanctuary in North Carolina. After a bolt of magic knocks her from the sky, leaving her helpless, she realizes too late that danger invaded her refuge.

Park ranger Lawke Morgan’s day goes from bad to worse when his ex-wife unexpectedly drops off their 13-year-old daughter in the beginning of a dangerous storm. His life takes a turn for the bizarre after he finds an injured Peregrine falcon that transforms into a lovely woman.

When his daughter is kidnapped by an Aztec priest, one who should have been dead for centuries, Lawke learns that Evelyn holds the key to the priest’s demands. Together they must confront blood sacrifices, defy ancient gods and find a way to trust each other when a young girl’s life hangs in the balance.

Can a woman used to soaring amongst the clouds embrace love with a man firmly rooted on the ground?

Willows Haven appeared to be a typical small town. There were residential streets intermixed with strip malls and a large shopping area near the highway. Even the downtown section had been revitalized with eateries, businesses, and professional offices. Like the local newspaper.
Several willow trees grew along the edge of a deep lake on the north side of town. They must have been the inspiration for the town name. Although that didn’t explain the businesses use of nature-themed titles. Someone must have an earthly sense of humor.
Lawke escorted Evelyn into the Cherries and Berries Diner. It occupied a large storefront on Main Street. They stood between the checkout counter and a large refrigerated pie case while waiting to be seated. A modest décor consisted of dark wood booths along the street-side windows and near the kitchen a beige countertop was lined with bright silver cushioned stools. The walls held paintings of different types of fruit trees.
“You can sit anywhere. I’ll be with you in a minute,” an older redheaded woman in a mint green uniform told them as she walked by carrying a tray filled with steak, eggs, and waffles.
He slid into the end booth where he could keep an eye on the door and anyone walking around the side, near the restrooms. Evelyn sat across from him and slid him a menu. They offered an eclectic selection of sandwiches, dinner platters, and breakfast entrees. Desserts, mostly pies and cobblers, covered the entire back page.
“What can I get you, sweetie?” the waitress asked, tapping a pen on her pad.
“I’ll try the strawberry French toast.”
Lawke shook his head at Evelyn’s sweet tooth. “I’ll have an omelet with mushrooms, onions, ham, and cheese with a side of fried potatoes.”
“Any coffee?”
Evelyn flipped through the menu. “I’d like a glass of apple juice.”
“I’ll just have sweet tea.”
The waitress nodded. “Be back with your drinks shortly.” She walked away.
Lawke glanced out the window at the empty street. Even for a Sunday, downtown appeared eerily deserted. Except for the bike parked in the lot next to the brick building across the street. Which happened to contain the offices for When the Tree Falls, the local newspaper.
“Why three days?”
He didn’t want to think about having to break the law, but he couldn’t pretend he didn’t understand her question, either. “It’s long enough to observe any patterns in the brothers’ lives while still being short enough that the priest shouldn’t kill Zoe.”
On the counter, a portable TV showed the projected path for the tropical depression. At least the storm was weakening, although they’d still have the potential for flooding.

Bio
Although Beth grew up in West Virginia, she currently resides in North Carolina with her husband, two sons and a Cavalier King Charles Spaniel who makes an excellent lap warmer. Blending the analytical and creative sides of her brain, she delights in creating fantasy worlds for others. Catch her online most days except when NCIS and Once Upon a Time air.

I totally had the theme song from the TV show Friends running through my head! I love the idea of a sanctuary, for both the supernatural or not. My home is definitely that for me--we have six acres of nature surrounding us, which makes a great bubble. :)

Thanks for hosting me today.

Ah,sanctuary. Love that word. Your book is now added to my read list. Thanks!

Welcome, Beth. It's great to have you here. I always enjoy reading what inspired a book. I love the concept of Sanctuary. I consider my home my sanctuary. Our property abuts a pond, and we're often "invaded" by mallards and Canadian geese. They must think the pond is their sanctuary. LOL Your book sounds so interesting. Love the cover.

Diane - We have a flock of geese that hang out by our Target (there's a small pond nearby). They have a nice sanctuary there. Sorry your sanctuary is invaded,. How long until mini-invaders arrive.

Beth, the invaders have been here since Feb. We had a mild winter. The geese can leave any time (their calling cards are all over our lawn), but we enjoy the ducks. Best wishes. PS, I love your cover, too.