Cover Reveal and Excerpt: Betwitching the Dragon by Jane Kindred

My blog-posting day snuck up on me this month, and I’m completely burned out with a day job editorial project that’s been encroaching into the evening hours for the past week. (Writing a manual on how to use new office templates to communicate effectively is terribly exciting work, I must say.) Meanwhile, as Book 3 in Sisters in Sin inches closer to the climax, I’m lucky to get in 500 words a day on it. And my cursed 1,000-year-old Viking is starting to get twitchy. Will my heroine free him from the curse or won't she? And will he get to punch Nazis? So many questions remain unanswered.

Needless to say, I’m drawing a blank on coming up with a topic for this post. So instead, I’m making this an impromptu cover reveal for Book 2, Bewitching the Dragon, due out in May. 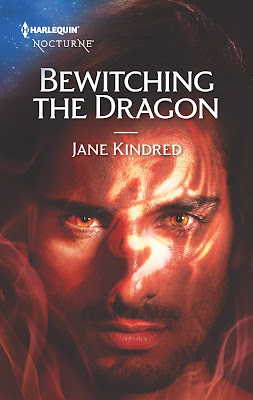 One Night  with a Dragon...

Ione Carlisle worked hard to be accepted by the Sedona Covent, but now everything is falling apart. Especially when she lets loose for a wild night on the town and ends up with the one man she should be avoiding at all costs—the man who came to Sedona to fire her. He ignites in her a carnal need that she can’t and won’t ignore...

Buttoned-up assayer Dev Gideon’s loyalty to the Leadership Council should be reason enough to resist Ione. Never mind that she stirs the ancient demon secretly bound within him. But their blood connection is undeniable. And now Dev must risk his reputation, and his soul, to save Ione from a vigilante intent on destroying her and the entire Covent, even if it means unleashing the monster inside.

If you’ve read Book 1, Waking the Serpent, you may find the heroine in the excerpt below unrecognizable as Phoebe’s big sister Ione. Which is just how she likes it.

She set her motorcycle helmet on the stool beside her. It kept guys from hitting on her unless she wanted them to. Sitting at the end of the bar took care of the other side. She could have used a repelling spell, but too much magic in one night made her feel even worse than drinking too much.

“Is that your Nighthawk outside?” The cultured, Hugh Grant-esque British accent sent a tingling vibration through her that completely missed her spine and went straight for the genitals. God, was she really this hard up that a fancy accent was all it took?

Maintaining cool disinterest in the man standing beside her helmet’s stool, Ione took a sip of her drink before turning her head slightly in his direction. Giving him the once-over out of the corner of her eye did nothing to dispel the disconcerting vibration. A pair of golden-brown eyes to match her glass of Balcones looked back at her, pieces of tiger’s-eye quartz rimmed in dark lashes against the warm teakwood hue of his skin. Thick black hair, impeccably styled, with a charming streak of gray at the temples, completed the picture. And the expensive suit said business tourist—but the kind of business that didn’t require sitting behind a desk in an office.

She was a sucker for a sharp-dressed man. And a posh accent, apparently. But ogling hot guys in expensive suits wasn’t what she was here for. She tried to assess whether he could be part of the network of what one of Phoebe’s clients in the Public Defender’s Office had referred to as “a bunch of power-tripping dicks.”

Ione realized he was waiting for her answer. “Maybe.”

“Sorry, that wasn’t a line.” He leaned against the bar as if he had no intention of moving on and gave her a crooked smile that made the tiger’s eyes shimmer. “I just haven’t seen one of those in a while. You’ve kept it in excellent shape.”

Ione gave him a dismissive shrug. “You never know what’s under the chassis. Maybe I just keep it looking pretty and ride it into the ground.” She went back to her drink, deciding he seemed a bit too straitlaced to fit the profile she was looking for, but he didn’t take the hint.

“I doubt that. The bike shows signs of being well loved.” He moved to the open seat beside the helmet and ordered a beer.

“Do you ride?” Ione hadn’t intended to talk to him, but her vibrating pussy apparently had a different agenda.

He shook his head. “I’ve ridden on the back of a friend’s bike, but my parents would never let me ride myself.”

The corner of Ione’s mouth twitched. “You live with your parents?”

“What?” Her companion choked a bit on his beer and set the bottle down. “Oh. No, no. You’ve misunderstood me. I meant growing up. Of course, even now, my mum would probably kill me before I could get myself killed on one if I even so much as…” His voice trailed off and he looked chagrined. “I just made it worse, didn’t I? Let me try this again. I’m Dev.” He held out his hand and Ione stared at it for a moment before he let it fall. “I’m just in town for a few days. Don’t really know anyone here—and I am really sounding like an arse.”

A little smile slipped out before she caught herself.

The bartender threw Dev a challenging look. “This guy bothering you?”

Ione shrugged. “Nah, he’s fine. Thanks, Gus. I think maybe he just needs something a little…stiffer.” She tipped her glass toward him. “Get him one of these.”

“I’m really quite fine with the beer, actually.”

His dark brows drew together. “Sorry…are you making fun of my speech?”

Gus brought the Balcones and Dev started to object, but Ione interrupted. “It’s on me.”

With a shrug, Dev lifted his glass to Ione and nodded before taking a drink. “So, do you come here often?” He grimaced as the words left his mouth. “God, that sounded like another line. I mean a line. The first one wasn’t a line. Neither was this—I mean…there were no lines. Oh, hell.” He concentrated on the drink and Ione laughed and shook her head. “What I meant,” said Dev, “was that it seems you come here often enough for the bartender to know you.” He paused for a moment as if he’d just heard himself and rolled his eyes. “I seem to be determined to keep digging this hole deeper.” Downing his drink, he slipped off the stool and straightened his suit. “It was lovely meeting you. Thank you so much for the beverage.”

Ione strangled the urge to laugh at the word “beverage.” “You don’t get out much, do you?”

Dev paused in the act of turning away. “Sorry, do you mean me?”

She threw him a sidelong glance. “I’m pretty sure Gus’s job gives him plenty of opportunities to hit on women. So, yes, I meant you.”

The warm hue of his skin became even warmer. “I really wasn’t hitting on you—”

Ione turned on her stool and leaned back with her elbows propped against the bar. “My God, you’re adorably awkward—Dev, was it? Do they make them all like you across the pond?”

She seemed to have rendered him speechless.

Dev glanced around as if trying to find the actual person she was talking to before laughing at himself and shaking his head, the tension of his stiff posture finally easing. “I don’t think they make any more like me anywhere, thankfully. I am rather dreadful at this, aren’t I?”

Ione gave him a wry smile. “So you admit you were hitting on me.”

Dev looked down at his feet with a smile, rubbing the back of his neck. “I might have done. Just a bit.” That little vibration inside her began to quiver once more, like a tuning fork buzzing with a faint, pleasant note.

Ione swiveled around toward the bar and raised a finger as Gus glanced in her direction from the other end where he was ringing someone up. “One more over here, Gus, when you get the chance.” She looked back at Dev, still standing there regarding her with a quizzical smile. Those eyes were really unfair. No one needed eyes that incredible. “Well? You in?”

Dev eased himself back onto the stool and smoothed back the gray curls at his temples with a grin. “I’m not sure what I’m in for, precisely, but I believe that I am, in fact, ‘in.’”

Ione finished off her Balcones. “The ride, of course.”

Dev paused with his hand on the glass Gus had set in front of him. “I’m not sure it’s the wisest idea to be riding a motorbike after imbibing alcohol.”

She rolled her eyes and Dev’s cheeks went scarlet. He lowered his head over his drink and paid great attention to it as he sipped. With her elbow on the bar and her chin propped in her hand, Ione studied him. It probably wasn’t the wisest idea to be contemplating what she was contemplating, either. He was not what she was here for. But that vibration was only getting stronger.

She couldn’t take him home, though. She’d nursed her drink over the course of an hour and she had a sobriety elixir that allowed her to ride safely regardless, but she couldn’t exactly explain the elixir to this charming, awkward stranger who had her halfway to climaxing without even touching her. Or even knowing he was doing it. Which was what made her want to get to the other half so damn bad. She had a feeling his witting participation in getting to that goal would be toe-curlingly, ass-numbingly incredible.

“Do you have a car?” She’d blurted the words before her non-lizard brain could stop her. And of course he had a car. Did she think he’d walked all the way here?

Dev wiped sweat from his upper lip with a sensual gesture he probably wasn’t even conscious of as he glanced up at her. “I probably shouldn’t be driving at the moment, either.”

“You’re assuming I’d even let you drive.” Ione picked an ice cube out of her emptied glass and sucked on it. It was now or never. She crunched the ice between her teeth and slipped off the stool, pulling out her wallet to leave Gus a generous tip. “It’s kind of loud in here. I thought we could talk outside.”

She headed for the door without waiting to see what his reaction was. If he didn’t follow, she’d just take the sobriety elixir and get the hell out of there. And if he did, well…

I know what it's like being under the gun. Your book sounds exciting. I hope it does well.

Gorgeous cover! Love how the dragon is worked in.

I think we all know how you feel, Jane. Overwhelmed at work and with the writing. Glad you shared the cover. Super, btw. Loved the excerpt. Best wishes on finishing it in time.