Science Fiction in Your Head by Guest Saharra K. Sandhu

What’s it like to have science fiction rolling around in your head?

I have been asked over the years why I chose to write in the science fiction genre. The answer is simple, there is so much versatility and I am only limited by my imagination. Of course once I chose science fiction, the next question is subject matter. Science fiction has a broad range from fantasy to faery to paranormal and everything in between. My favorite is paranormal romance. Basically, people who have other powers but have to fit in with ‘humans’ in order to live. As a budding writer I was advised to write what I like and this is how I came up with my paranormal series.
Of course the next thing to decide was their powers and the conflict  (And still keep it original). When I looked at all of the material out there, I saw a lot of the same themes; vampires, witches, gods and demi gods most of them from the Greek pantheon. A little research and a LOT of reading later, I decided on using stories and folklore from different countries. Now this opened my universe wide open!
One more thing, I am scientist and I love Earth science. I decided to add in a pinch of science fact to the stories. For instance, did you know there is a place on Earth called the Eye of the Sahara? Google Earth the name and take a look. It really does look like someone carved a gigantic eye in the desert sands of the Sahara. I wove a story around this site and get a kick when people tell me I have a wild imagination. I nod, smile and tell them you have no idea!
There are so many natural phenomena in our world and I believe there is a story to tell for all of them. Anything is fair game and I troll around constantly for odd factoids about the world around us. When you have science fiction rolling around in your head, a simple cloud formation could turn into an alien invasion…or better yet a love story. 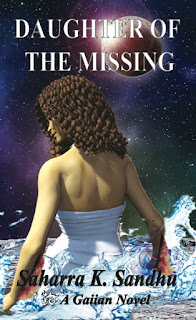 Astronaut Sarai Mathews knows the end is near when a giant wave rolls in and pulls her from the beach weeks before her space launch.  But something strange happens: she doesn’t die. Instead, she grows gills and breathes underwater.  While in the depths, she meets a man named Jon Luc. According to him, they’re both children of Yemalla, an ancient African queen of the sea. They are half human, half Earth spirit and she is a descendant from their missing children who were lost in slavery. Now, with Jon Luc’s help, she must solve the mystery of her heritage because someone is after her and they are determined to stop her from reaching orbit!

About the Author:
Saharra K. Sandhu is a mad scientist during the day and a romance writer at night. Great combination! She has traveled throughout South America and the Caribbean collecting folklore and Afro-Caribbean stories. With her library full of material, she set out to weave tales based on these treasured finds. Thus, the half sea spirits, half human Gaiian (sounds like Hawaiian) people were born. Her debut novel Daughter Of The Missing is a finalist in the Harlem Book Fair Wheatley Book Awards and a winner of the Beverly Hills Book Awards for African American Literature. The sequel Fire In Ice (Due out February 2017) placed second in the Valley Of The Sun Hot Prospects Contest. She currently resides in the South West with her husband, two children and pet dog named Derby. To learn more, please visit her Web Site at www.saharraksandhu.com.

Welcome, Saharra. Sci-fi romance is my thing, so this story is right up my alley. Love the idea of missing heirs. It is amazing when stories roll around in your head. You just have to write them. Best wishes

Great post, Saharra! It's so nice to find new and unique creatures and tidbits and storylines out there...nnot that I have anything against vampires and werewolves! I love how you use scientific earth facts too. :)

Welcome! I love your cover. The story sounds very intriguing.