King of Thieves Release and Giveaway 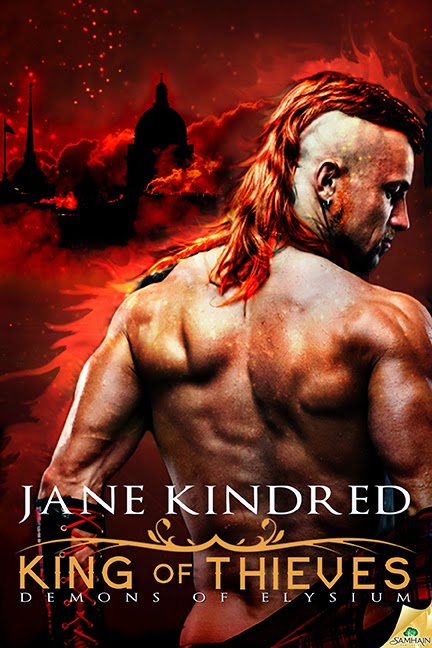 There are worse things to lose than one’s good name.

Belphagor can seduce demons with a look and bring angels to their knees with a single motion, but when it comes to being in love, the Prince of Tricks is out of his element.

At every turn, Vasily rebels against the discipline he claims to want, even refusing to use his safe word. But when Belphagor uses a scheme to shut down an underage brothel to test Vasily’s limits, he loses Vasily’s trust along with the boys he intended to set free.

Uncovering a smuggling ring that spans two worlds, Belphagor calls on a team of Nephilim mercenaries to rescue the “Lost Boys” from earthly gangsters. But his relationship seems beyond repair—and a heartbroken Vasily beyond his reach in the arms of a sensual demon named Silk.

Belphagor has more than enough grand schemes up his sleeve to bring down the smuggling ring for good. But when it comes to putting things right with Vasily, his bag of tricks is empty. Except for trust…and a plan to teach his boy a lesson neither will soon forget.

Warning: Contains two strong-willed lovers who will test the theory that without air, there can be no fire. Expect plenty of smoke, more than a few mirrors, and an old-fashioned Russian duel. You may need a shot of vodka when you’re done reading this one!

Belphagor crouched in front of him and released the belt around Vasily’s wrists from its buckle. “You’re right.” The shocked look on Vasily’s face was almost comical, but again, not the time for laughter. Belphagor cleared his throat. “I’ve been greatly remiss in failing to show my appreciation for what else your mouth is good for. And you gave an excellent demonstration of that with the invectives you hurled at me this morning. Perhaps I should keep you permanently gagged.”

As furious heat rose in Vasily’s skin, Belphagor hooked a fist in his locks and held him still, taking his mouth in a rough kiss that stunned Vasily into silence. He savored the smoldering heat and the smoky flavor of the firespirit tongue, slick and willing despite his boy’s anger. A slight whimper reminded him of the thornfruit, and he eased off, nipping gently at the wounded lips, and then sucking the plump lower lip into his mouth just to hear Vasily whimper again.

When he let him go, he pressed his forehead to Vasily’s and held his gaze. “You have the right to take exception to perceived mistreatment—whether I perceive it as such or not, and whether I choose to give you more of it, which is my privilege—and to tell me when I’ve hurt you in ways I don’t intend. And even to refuse to comply with a request that upsets you. But you do not have the right to fail to use the word we agreed upon for such matters, allowing me to continue to wound you without my even knowing it, and then to blame me for it.”

The angry red in Vasily’s cheeks dissolved into an embarrassed pink.

“Do you remember your word?”

Vasily nodded, and when Belphagor yanked his hair, he burst out, “Seraphim!”

“Khoroshiy malchik.” Belphagor kissed him again on the whispered words. “My very good, very lovely boy.” Vasily moaned as Belphagor traced his thumb along one cheekbone above the rough patch of a coppery sideburn. “Now, which shall I punish you for first? Your failure to use the safe word, or my failure to recognize your distress?”

a Rafflecopter giveaway
Posted by Jane Kindred at 5:01 AM

I have already read it, so it's on my goodreads bookshelf, but not technically on my to-read list, but I hope that's okay.

I absolutely loved it! Definitely worth reading, guys!

And my wings would probably be of fire :)

Wings that are retractable so I could use them when I needed them. Thanks for the contest!

My wings would be magnificent & mighty.

Bat-like. I'm rather fond of bats.

Something strong. Dragon wings would work!