I'm pleased to announce Carina Press has just released "In the Black", the first book in my new series, "Tales from the Edge". It's a rip-roaring science fiction romance/adventure series with I like to explain as "Firefly" meets "Best Little Whorehouse"… but why not read an excerpt and you can judge for yourself? 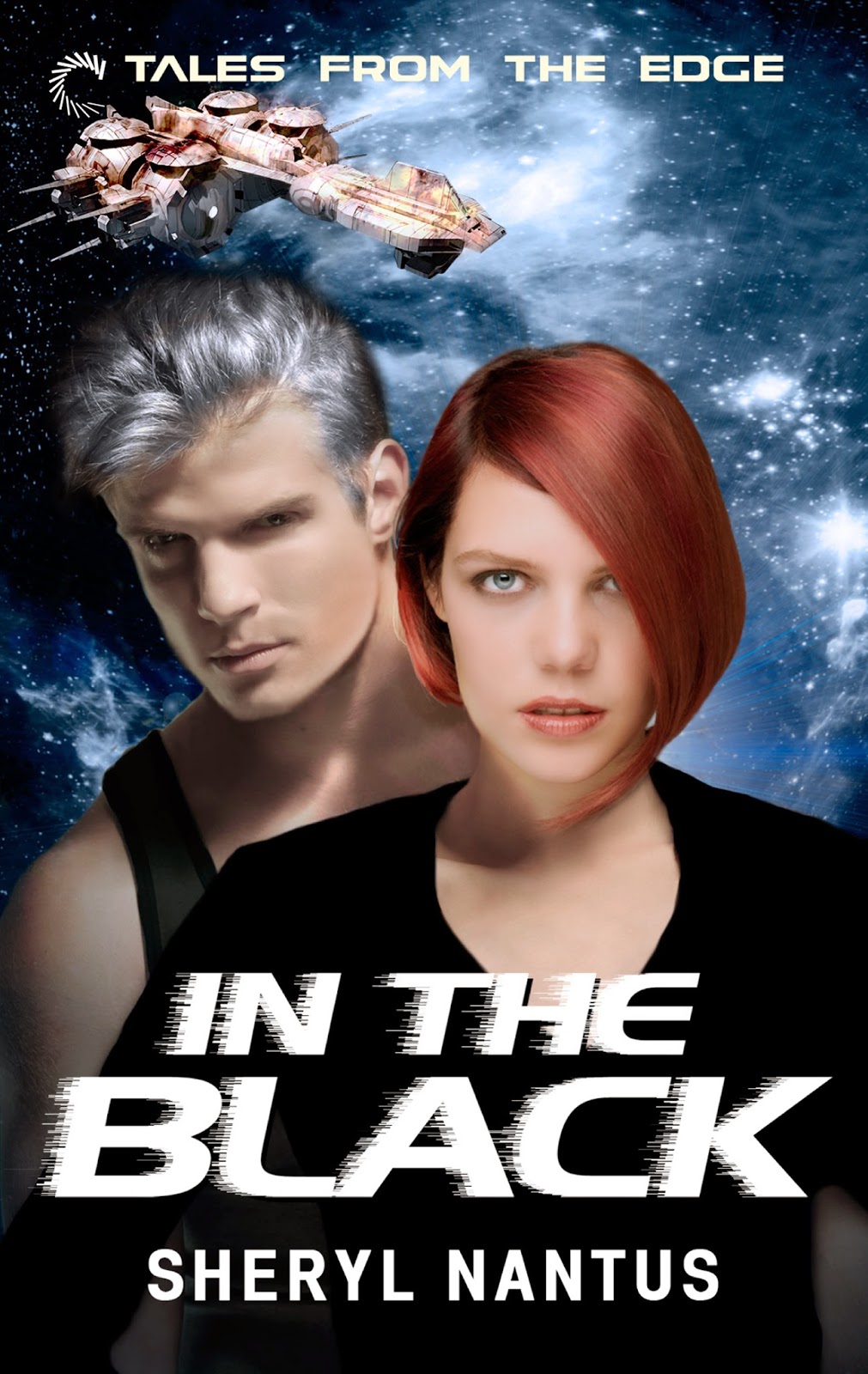 This was the worst part of the job, the toughest thing for any captain who ran a Mercy Ship. When she’d taken over the Bonnie Belle six months ago, it’d seemed amusing— starting off the landfall with a bang, as it were. Then back to signing off on maintenance reports and reading mystery novels until the Belle was ready to head out for the next stop on their cycle.

Now this ceremony was like a hangnail catching on anything and everything without relief in sight.

Performed once a month.

For another four and a half years.

Samantha Keller stood in front of the double doors, waiting for her cue. A low beep in her ear from the transmitter signaled her to proceed. She pasted a huge smile on her face and pushed her way through the swinging double doors, making a note to swing her hips and slow the hell down.

She couldn’t run down the aisle, no matter how much she wanted to get this over with.

The black leather straps cut into the back of her heels as she strode down the center aisle. She made a mental note to toss the shoes into the garbage bin as soon as she got back to the Belle.

She’d have worn her old jump boots but Jenny insisted on her buying the stilettos on their first stop at  base, saying they matched the brand-new leather jumpsuit and that it’d be unseemly for her to make the announcements in “ragged, old, stinky” military boots.

In the end she’d bought the bloody shoes, the ones now gouging raw spots on her heels. Six months and they were nowhere near broken in.

Mind you, she only wore them for a few minutes once a month. Maybe she should have Jenny stomp around and soften them up.

The damned jumpsuit still rode up, tempting her to make some very unladylike gestures.

Along with the weapons that went with it.

There was something about having a pistol at her side that made certain situations more bearable.

She spotted Huckness, the security chief, standing off to one side with two of his men, his attention not on her but on the two hundred miners spread out in front of them in the main meeting hall. He was looking for signs of trouble.

She was about to deliver it.

The second step was her undoing. Her damned shoe missed the metal strip, landing on bare wood. Her left ankle twisted outward, almost sending her crashing down the steps. Her right hand shot out and grabbed the podium’s faux wood edge.

As far as she was concerned this near-fall added one more point toward tossing the damned shoes into the incinerator as soon as she got off this stage.

A curse dangled on her lips before being pulled back and twisted into a grin, primarily because of the live mike only inches from her face.

With this crowd, it’d probably be considered foreplay.

Wolf whistles followed her every move. Two hundred hungry men waiting for her. Wanting her to deliver the goods they’d been promised.

Another dozen or so women were watching from an office somewhere. The women assigned to Branson Prime worked the administrative positions, keeping the ink flowing to keep the base alive. Only a smattering but they were potential customers and the Guild prepared for every eventuality.

They were already segregated from the men in the work areas and it continued for this presentation, allowing them to watch the show without commentary from the male staff. It wasn’t just out of politeness—it was good business. Let them see the wares without judging or being judged by their male associates.

Another day, another show.

Andrew Trainer, the foreman, stepped away from the podium. A minute later and he was in the front row of eager spectators, dressed in the same drab grey clothing as the rest of the miners. The only thing showing his rank was a black stripe on one sleeve. He wiped the sweat from his forehead on his sleeve even though the room was cool, the air-conditioning roaring over the crowd.

Sam gave him a wink, causing the dark-haired man to rock back and forth on the metal bench.

Inside she laughed. If she could get a rise out of the old guard with nothing more than a wink, she might have a damned riot on her hands by the end of the presentation.

Her lips twitched once, and then curved into a smile.

She’d enjoy a riot. It’d been a long time since she got in a good old-fashioned brawl, two landfalls ago when some idiot thought he’d jump the line when she was walking through the landing bay on the way to trade some books with the base library. If she hadn’t gotten to him first he might have not survived the rough justice being handed out by his fellow miners.

It’d been a pleasure to kick his ass. Almost as good as sex.

“Hello, Branson Prime,” she purred into the microphone, grimacing as her vocal cords protested at going so low and slow. It was a necessary evil; her command voice wasn’t going to work here.

The resounding cheer was deafening. She withdrew a small data chip from her pocket and inserted it into the waiting slot on the console. The yelling subsided when she waved them down, but a low murmur continued to run through the crowd, a delicious anticipation of what was to come.

“I’m Sam Keller, Captain of the Bonnie Belle—that sweet little Mercy ship that docked with your fine manufacturing facility an hour ago. And I’m here to declare that we are—” she paused for three heartbeats, seeing the hungry eyes, “—open for business!”

The two hundred-plus miners jumped to their feet as one, stomping their booted feet in a deafening chorus. Given the sparse decorations they looked more like prisoners than potential customers. But they were buyers and she was here to sell a product.

She pointed at the large screens set around the mess hall as they flashed to life, the bright pictures drawing yells from the workers. Usually they displayed boring litanies of production quotas and the occasional sports competition piped in from the inner planets. Now they rotated through the images of the six courtesans, expertly posed and photographed to provide the most titillation for the money. No outright nudity, just a flash of skin here and a wink there. More than enough material to fuel a man’s or woman’s fantasies for those long, dark, lonely nights out here on the edge of colonized space.

“Two hundred credits an hour and you can do anything you want.” She leaned over the podium and pressed her lips to the microphone, letting the zipper on the jumpsuit “accidentally” slide down just enough to exaggerate her cleavage.

It’d taken Jenny a week of oil and sweat to loosen the zipper enough to get it to come down on cue. But it was well worth it, every time.

“Anything.” She exhaled over the black nub, drawing the word out as long as she could.

As you can guess the Bonnie Belle's stay doesn't go as planned… but why not plan a visit to the Belle for yourself? Why not come on board and see what all the fuss is about!

When Sam Keller left the military, she ran to the far end of the galaxy. Now she captains the Bonnie Belle, a spaceship full of courtesans who bring a little pleasure to hard-up men on mining colonies. When one of her girls turns up dead, it’s  Sam’s job to find out who killed her, fast.

Marshal Daniel LeClair is as tough as steel and quick on the draw. But when his vacation gets replaced by an assignment to help find the killer, he can’t help angling for a little action with the saucy, hard-charging Sam. She’s  got brains, attitude and a body he wouldn't  mind investigating.

Sam, six months lonely, might just indulge him. But the Guild that owns the Belle wants the case closed yesterday. With pressure coming from all quadrants, Sam and her marshal clash over false leads and who’s on top. But when the killer threatens the Belle again, romance will have to wait. It’s a captain’s job to save her crew, no matter the cost.

Order "In the Black" from Carina Press, Amazon, B&N, iBooks and Google Play!

Posted by Sheryl Nantus at 9:00 AM

I REALLY loved this novel and enjoyed the worldbuilding and the mystery, as well as the romance. Can't wait for the next book in the series!

I, too, enjoyed this book. Lot of suspense. I agree with Veronica about the worldbuilding. Well done.

Thank you both for your kind words!