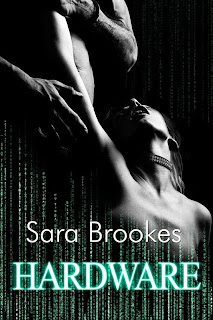 Hey everyone. So sometime earlier in the year I was asked by the amazing Sara Brookes (who by the way isn't just talented but one of the nicest authors you will ever chat with) to look at a book she had completed and was thinking of submitting for publication. I was honored. I'm a big fan of her writing. Entering the world she created was an incredible experience, I loved the book and I've never forgotten it. I'm thrilled to announce that last night, Hardware, released with Liquid Silver Books.
So, today I'm interviewing Paranormal Romantic's very own Sara Brookes about her new release Hardware.
Posted by Rebecca Royce at 1:00 AM

Email ThisBlogThis!Share to TwitterShare to FacebookShare to Pinterest
Labels: Interview with Sara Brookes

Aw, thank you so much for your kind words, Rebecca. It was an honor for you to do the early reads on it. :^)

Sara,
I'm so excited you are getting to share this with everyone!

Just finished the book and loved it. Looking forward to more... maybe a book that focuses on Elana.