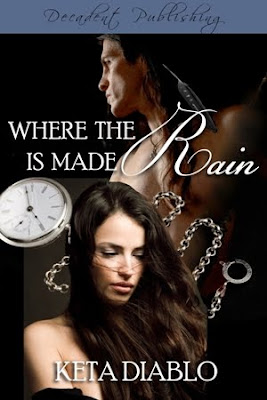 Where the Rain is Made
Author: Keta Diablo

Every author strives to tell a wonderful story. A heartfelt tale that will touch the reader in a way they’ll always remember. Where the Rain is Made did just that.
Diablo weaves a story together with such beautiful writing it can only be described as poetic. But it’s not only the writing that made this story incredible, it’s how Diablo told an entire life within one story. I was completely enthralled with the Native American life, the conflicts Cesca experienced as the story progressed, and the romance between her and Meko left me breathless. Every character, not just the main ones, I fell in love with, laughed and cried with ―and are ones I’ll never forget.
Expect big highs and huge lows. The story took me on a roller-coaster of emotions. One second I was smiling. The next, I was a blubbering mess. My heart wrenched and twisted while the characters suffered through dangerous and horrible times. But when little happy moments took place, I found myself nearly crying with joy because of it.
All I can say is, Where the Rain is Made is a must read. It’s utterly fantastic!!!
THE BLURB:
A decadent-looking savage has captured Francesca DuVall and her brother, Marsh. Now she must spend every waking moment planning an escape from the camp of the brutal savages. What she doesn't count on is the powerful draw of desire interfering with her scheme.

Ethan Gray is a curator at a national museum in Washington, D.C. . . . most of the time. But when he travels through time to help his beloved People, he becomes Meko, leader of the most revered and feared tribe of the plains, the Cheyenne Dog Soldiers.

Their worlds are decades apart, yet Meko can’t resist the dark beauty he kidnapped during a raid. He has many battles to fight, but none more crucial than capturing Cesca’s heart forever.
A LINE THAT HAD ME DROOLING WITH WORD ENVY ― Brother to the open sky, ally to the distant sun, he’d soar above the clouds to where the rain is made.
Website - www.staceykennedy.com
Facebook - http://www.facebook.com/?ref=home#!/profile.php?id=100000956942180
Goodreads - http://www.goodreads.com/author/show/3473046.Stacey_Kennedy
Twitter - http://twitter.com/Stacey_Kennedy

It's difficult to know what to say after that review.Thank you so much for your kind words and praise. I'm thrilled you loved Where The Rain Is Made.

I think the highest compliment a writer can receive is kudos from her/his colleagues. Only other writers know we sometimes struggle for every word, anguish over a sentence and hit the delete button far too often.

My humbler thanks and sincere appreciation,

Sending good thoughts for all your future writing endeavors,

So happy others are reading and loving Where The Rain Is Made. I read this book because of the strength of Keta Diablo's name and will go on reading her fantastic bookshelf.

WTRIM is a memorable book, which has lived with me since I finished it some weeks ago.